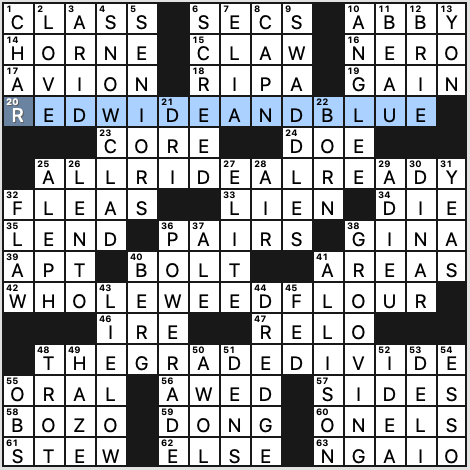 I like a good pun, and these…aren’t bad. I especially like the first one which sounds like the punchline to a solid, middle-schooler’s joke (or a dad’s).

My only gripe would be that the theme seems to be very wide open without any other connecting constraint. Is there something in common between WIDE, RIDE, WEED, and GRADE? Something to do with “pass”? You can pass a grade, and I guess you can pass the weed. But I’m just not seeing it for the other words. If you spot something, let us know in the comments.

Moving to the fill, TIL (Today I Learned), NGAIO Marsh was a Dame Commander of the Order of the British Empire and was a New Zealand crime writer. As a fan of Agatha Christie and P.D. James, I should probably know her name.

I also learned DONG is Vietnamese currency, and not just a word in a middle-schooler’s joke (or a dad’s). (Oh, I just noticed a point of consistency about the theme. All the T sounds are at the end of a word. If they were at the beginning, one could change “ice tongs” to ICE DONGS and clue it…[Cold, hard Vietnamese cash], obviously. Why, what were you thinking?)

Aside from those tougher bits of fill, the long entries are nice: SNOW-CLAD, GROOVING, POWERADE, SWADDLES, LIE LOW, ALLISON Janney, and fully-named ANG LEE. I could do without crosswordese ELIA, LENTO, and ONELS.

One clue of note: 41a. [Village greens, e.g.]. AREAS. Hmm. These don’t match well in my mind. Village greens are too specific for a broad term like AREAS. If you’re going to do that, then you could go with [Parking lots, e.g.] or [Rooftop gardens, e.g.] and on and on.

I enjoyed the theme answers in the puzzle, but it feels like it needs another layer. I’ll amend this if someone points out to me whatever it is I missed. For now, 3.4 stars. 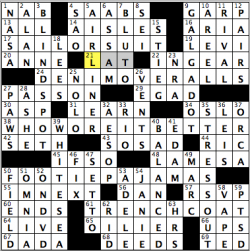 Good day, everybody! Ade coming off the substitute’s bench today, and hope you all don’t mind what is to come. Our grid is from the crossword/pro wrestling tag team champions of Ms. Amanda Rafkin and Mr. Ross Trudeau, and all I had to say upon reading the byline was a RIC Flair-style “Wooooooooooo!” (44A: [Wrestler Flair]). Bear with me, this review gets better, I promise.

In their grid, four theme entries are articles of clothing donned by the two animated characters mentioned in each of the theme answers’ clues. To top it off, the theme entry of WHO WORE IT BETTER right across the middle acts as the reveal (38A: [Question asked regarding two red-carpet photos of those named in the starred clues?]).

So we have BLUTO (7D: [Comic strip antagonist with massive arms]) crossing the theme entry that has Popeye in its clue and we have LEES intersecting the “denim” portion of the second theme entry (18D: [Wine dregs]). Not sure if that was intentional or not, but definitely next-level meta right there. Definitely came across a BLIND SPOT (3D: [Driver’s danger]) when coming across John Irving novels, though the crossings allowed me to get GARP fairly easy (9A: [Title character of a John Irving novel]). Only real slip-up was typing “The Volga” initially where WHITE SEA should have been (39D: [Body of water in norther Russia]). Interesting clue for LAT that could cause people to not recognize the longitude reference in the clue (21A: [What doesn’t go a long. way?]). Any time I think of PAIRS in relation to figure skating, the only people that pop into my head are the British ice dancing pair of Torvill and Dean (Jayne Torvill/Christopher Dean), probably because they’re, almost inarguably, the best duo to ever perform on the ice (12D: [Figure skating category]). Before heading out, a shout-out to JANIE Smulyan, who so wonderfully provided so many wonderful takes of crosswords on this site, and so hoping she is doing well and pops in to say hello to all of us on here soon once again (54D: [Title girl with a gun in an Aerosmith hit]).

“Sports will make you smarter” moment of the day: DADA (67A: [Duchamp’s art movement]) – In the early 2000s, an obscure shoe company named DaDa entered the sneaker game in the NBA, trying to rival the big boys of Nike, Reebok, Adidas and the like. What resulted were some of the more memorable sneakers of that time, though it might have be memorable for the wrong reasons. The good news is that, for a time, NBA All-Stars such as Latrell Sprewell and Chris Webber signed onto its brand. However, when one of the sneakers has spinning rims designed onto the panels of the shoes, like the one Sprewell wore, then you might get more stick than praise. Spinning rims were a fad on cars, and even more fleeting of a fad on sneakers! Enjoy! 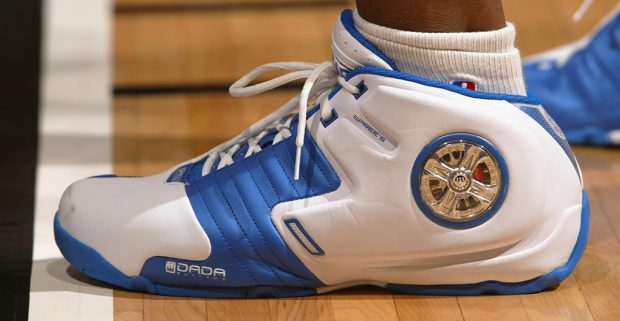 Thank you so much for the time, and I hope you did not mind my temporary stay on here today. Have a wonderful and safe rest of your day and, as always, keep solving! (Thank you for allowing me to keep this line active, Janie!) 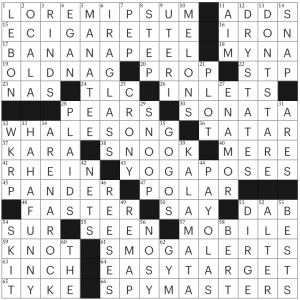 Hi good morning, this was fun! Fairly brief writeup today because I teach in 30 minutes.

I mostly love the stacks in the NW/SE (LOREM IPSUM / E-CIGARETTE / BANANA PEEL / SMOG ALERTS / EASY TARGET / SPYMASTERS). I don’t super care for E-CIGARETTE (don’t vape, kids), although the clue [Vaporware?] was clever. Other good long stuff include DON’T STARE, “HAHA” FUNNY, WHALESONG, KALAMATA, and the full name IRA GLASS, who is so often cut down into just IRA in crossword puzzles. “HAHA” FUNNY, for those who may be confused by this entry, means something that is FUNNY in the sense that it makes you laugh, as opposed to FUNNY in the sense of suspicious or otherwise not-actually-funny.

Overall, tons of stars for a fun grid and even funner cluing. Yeah, I said funner.

PS. I wrote this week’s Boswords tournament puzzle! If you haven’t solved it yet, there’s still time to submit! 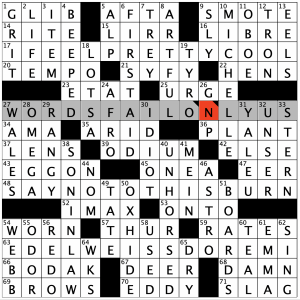 Today’s AVCX is a tribute to Broadway from Stella Zawistowski.  I encourage you to read her constructor note that came with the puzzle, as it’s really sweet.  Let’s dive into the theme!

Each “medley” consists of two songs from the musical that can be placed consecutively to make the clued phrase.  The only one of these I struggled with was 27A – I never saw “Dear Evan Hansen”, so I’m not as familiar with its songs.

This series of “Gap” ads (and the SNL sketch that made fun of them) are the first thing that pops into my head when I’m reminded of “Cool” from West Side Story.

“riverrun, past Eve and Adam’s, from swerve of shore to bend of bay, brings us by a commodius vicus of recirculation back to Howth Castle and Environs.” 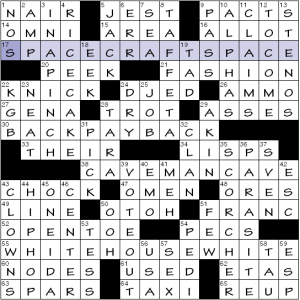 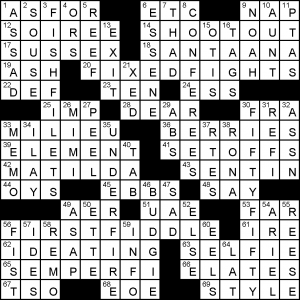 I can see the attraction of SEMPERFI as a revealer, especially to jingoists. That said it’s a little tortured to translate SEMPER into ALWAYS and then to… BOTH to get to answers with the pattern: FI…/FI… It seems the number of theme possibilities was far more limited than apparent. We have two gratuitous plurals, with FISHFILETS really wanting to be either unthematic FILETOFISH or FISHFILLET, but is stuck as some unholy hybrid.

There are also big corners, with the extra revealer resulting in the bottom right being propped up by IDEATING. The opposite corner, however has SHOOTOUT and SANTAANA and elsewhere we have MATILDA in the debit column.

I wonder when RONA will be clued pandemicly? Probably not for a while…