Based on the title, I was expecting to see Vs in the grid, but the circled letters are in the shape of Js. When I realized CONDOR was in the first J, I was still confused. If we’re going to imagine condors flying in formation, why a J and not a V? 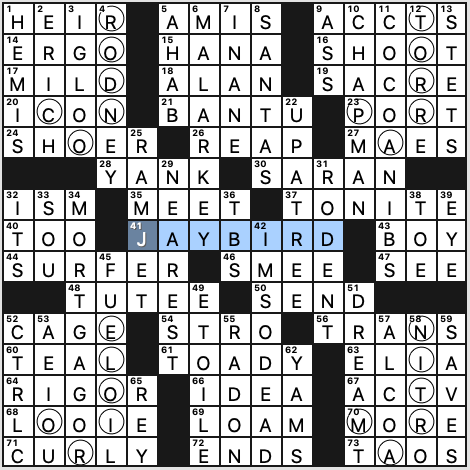 The birds themselves are unclued but they are the CONDOR, PARROT, ORIOLE, and MARTIN. I thought this was pretty nifty and a good play on words. It definitely helped at the bottom of the grid knowing that I was looking for birds, even if they were unclued.

The fact that they’re unclued means the puzzle mostly solves like a themeless, so the fill takes on a bigger role. For the most part, its good though I admit to having trouble with the end of COCOA NIBS—mostly because I had SON where BOY was meant to go in the crossing.

The other tough one was ETOILE [Company’s leading dancer]. Brand new to me, uncultured swine that I am.

Here I am visiting Joe Biden’s Animal Crossing island back before the election. Of course, I blinked for the picture.

Easier to love are “I’M SO DEAD,” MALARKEY (a fave of President Joe), and UP A TREE. Also: RAMJET, SURFER, TOADY, and CTRL-C.

Nice puzzle. The best of the week, IMO. Four stars.

A Fireball themeless that is not by Peter Gordon! Don’t get me wrong. Peter’s themelesses are really good. It’s still nice to see someone else get a crack at it, especially when “someone” is Team Fiend’s own Stella Zawistowski. She makes, well, fiendish themelesses. This one is several shades easier than the puzzles on her website. 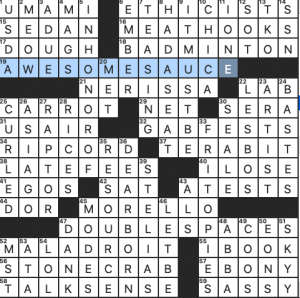 What I didn’t know before I did this puzzle: that Sally Field voiced SASSY the cat in “Homeward Bound.” 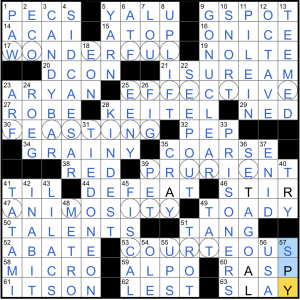 Alex Eaton-Salners has today’s NYT – let’s take a look at what’s going on with these circled squares:

It’s an interesting idea, but I found the actual solving of this to be a bit of a slog – the self-referential nature of the clues meant there wasn’t really a handhold besides crossings on these clues.  I think it’s neat that each of these words contains its own opposite running through it in order, but otherwise it was a bit stodgy.

“Union Station-Dupont Circle connector, in D.C.” was the clue, but Berlin’s “METRO” came to mind when I saw it in the grid.

Other nice grid bits: G SPOT, ACAI, GRAINY and COARSE next to one another, ALPO, CANDY BAR, and PRISONER

I stumbled around this one for a while because most of the theme-related musical references are unfamiliar to me. The crossings were fair, the wordplay is funny, and I enjoyed solving it nonetheless.

Each theme answer is a musician’s name altered so it contains a body part. 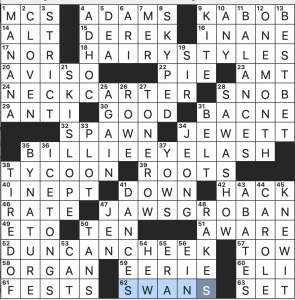 One quibble: the NECK is not a part of the face. Fun theme! I’m sure a number of solvers disliked it because of the reliance on proper names from recent pop music. As I’ve said before, if I don’t know something in a puzzle, that’s on me. Doesn’t make it a bad puzzle. It makes me an old-ish white woman with some large lacunae in my knowledge base.

Pretty much the entire theme was “what I didn’t know before I did this puzzle.” I also didn’t know that Amy ADAMS was in “Hillbilly Elegy.” I read and heartily disliked the book, so I have no intention of seeing the movie. 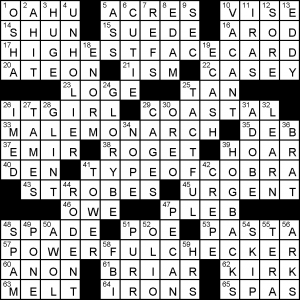 It’s a clue/answer switcheroo theme today. These work best when the answers are not related. Thing is all three other answers are derived from the second: MALEMONARCH. The HIGHESTFACECARD, the POWERFULCHECKER and the TYPEOFCOBRA.

The rest of the puzzle is pretty basic, making the puzzle play quite easy. GLORYBE and ITGIRL kind of stick out because they aren’t one word answers.

THEME: Common phrases where the first word can be unscrambled to spell a type of fish. 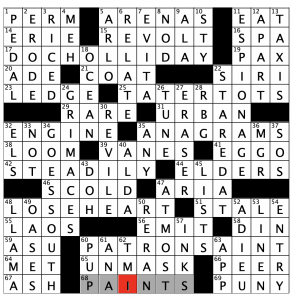 Enjoyed these entries, even though it took somewhere close to forever for me to see TETRA and TARPON hiding in TATER and PATRON respectively. The real winner for me was the fill and clues. Very fresh and fun imo.