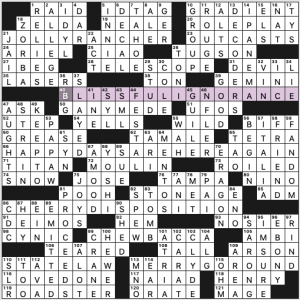 I like this theme. When you’re “over the moon,” as the puzzle title says, you’re really happy. Here, synonyms for happy that are part of longer phrases appear right above the name of a moon in the solar system:

I appreciate that the moons chosen are all letter-count matches for the “happy” words above theme, no “approximately over part of a moon” hedging.

I had a sinking feeling after encountering both IDYL and DAR in the 1-Across corner, but then the fill overall didn’t bug me. Whew!

Did you know that there are a lot of idioms in English that include words for body parts? And some of them describe damage to those body parts? Well, Morton noticed that and decided to cram a bunch of them into a “quip” and make a puzzle out of it. I don’t like quote puzzles all that much. I like them even less when the quote is made up out of thin air. The fill does not redeem this puzzle. 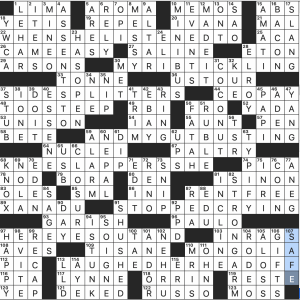 The theme, in all its glory: WHEN SHE LISTENED TO MY RIB–TICKLING SIDE-SPLITTERS AND MY GUT–BUSTING KNEESLAPPERS, SHE STOPPED CRYING AND STARTED LAUGHING HER HEAD OFF.

There it is. And oh, it’s SO funny that the speaker of this oh-so-amusing quip managed to dismiss a woman’s emotions by joking! That’s totally what we want the men in our lives to do when we’re upset, amirite, ladies? Just jolly us out of it!

Yes, dudes, I know it’s a joke. I know I’m not supposed to take it seriously. Maybe if it was a halfway-decent puzzle, I wouldn’t be so annoyed by the subtext. Unfortunately for us all, it is not. Plural ARSONS. Roll-your-own CEO PAY (clued with reference to the IRS schedule on which it’s reported because sure! that’s common knowledge). The letter Q spelled out as KUE. Fill-in-the-blanks all over the _____. Abbreviation PPD (for pre-paid, I pre-sume). Pasta suffix –INI. The MET‘s division abbreviated as the NLE, which may appear somewhere but is not the standard notation for NL East. Feh.

What I didn’t know before I did this puzzle: that CEO PAY (ugh) is reported in SEC form 10-K, part 3. Oh, geeze, it’s the SEC, not the IRS. Somehow that makes it worse.

The revealer is at 106a, [What you may say after hearing great news, and a theme hint], or THAT’S MUSIC TO MY EARS. 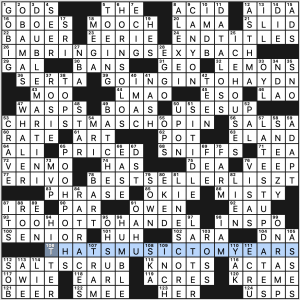 I quite enjoyed these, especially that first one, which is strong enough to carry the whole theme.

And look how the long fill sparkles in this grid, starting off with a DOUBLE MARTINI and the LATEST UPDATES, there’s also POOH-POOHS, HORN SOLO, DATA LOSS, “OH SURE,” SALT SCRUB, RAT RACES, and END TITLES. I’m not sure what ICE HOUSES are if not igloos. Ah, the Internets tell me they’re structures used to store ice (prior to the invention of refrigeration) rather than made out of ice.

I’ve never heard INSPO as [Creative motivation, slangily] but maybe that’s something the kids these days are saying. Nor did I know award-winning actress ERIVO [Cynthia of “Harriet”], but she’s three-fourths of the way to an EGOT, and she’s already been twice-nominated for an Oscar. I expect we’ll see her name more in crosswords.

But I could definitely do without BATCHES. BATCHES! We don’t need no stinking BATCHES!

Honestly, a really fun theme and lovely grid. An easy 4.25 stars from me.

Guest constructor today! And what a guest it is- I can’t imagine anyone who doesn’t love a Lynn Lempel byline. She is known for creating easier Monday-level puzzles with squeaky clean grids and accessible themes. 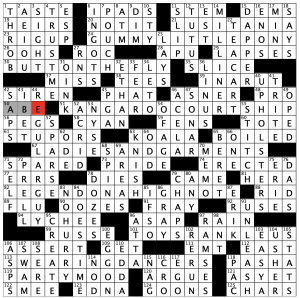 Really a joy to solve this one today. Like a special gift, wrapped up in a bow and placed neatly under the tree. I got a good chuckle out of my favorite of the themers, TOYS RANKLE US. Although it was the hardest for me to parse, it offered a great visual. I need to use the word RANKLE more often. SWEARING DANCERS is pretty funny too. Though if the dancers I’ve been around in musical theater world are any indication, it’s a very apt entry.

I had to look a while at BUTTON THE FLY. I wan’t entirely sure it was a themer. It actually sounds like an in-language phrase to me. I think it was an ad campaign a long time ago for a brand of jeans… Sure was! Here’s an article about it.

You can also be the first one to leave a comment on this Levi ‘s ad I found on YouTube if that’s your thing.

KANGAROO COURTSHIP gave me a momentary pause as well since it looks like SHIP could be added to KANGAROO COURT.

Solid clue/answer pairs all around. 2D for the win [A serious group?] AEIOU. I’ve seen iterations of this clue before. I fall for it every time. A E I O and U are a “group” that can be found in the word “serious.”

Thanks Lynn! And thanks Evan for welcoming guests into your venue.

THEME: The word PLAN can be found backwards in each theme entry. 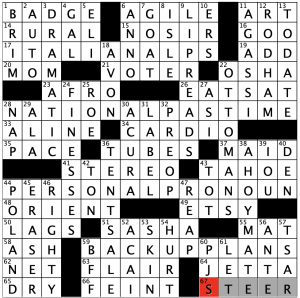 Flew through this one. Those grid-spanners were big gimmes. Came very close to breaking the three minute mark, which I think I’ve only done once or twice. If I hadn’t entered EASY instead of ETSY I woulda had it.

ETSY clue is quirky by the way… [Where to buy a Spider-Man costume on the web]. I mean sure… but very specific. I know it’s having fun with the word “web”… but I think it needs a “perhaps” at the end, since my first and second stops for that item would be halloweenexpress.com and Amazon, in that order. I use ETSY to purchase personalized stuff to spoil my dogs.

I’m not entirely familiar with a TENT SALE, but I feel like I just saw that entry in a Universal this week… Maybe I’m dreaming that up. I can’t seem to find it, but I swear I saw it very recently somewhere.