Lynn’s guest appearance at the WaPo on Sunday was my favorite puzzle of the weekend. When I see her byline, I smile in anticipation of pleasure. I know the grid will be smooth and the theme will be solid and consistent. This one is no exception – although it took me a while to figure out exactly what the theme was.

The revealer at 36a is [Hamlet’s dilemma…with a phonetic hint for the last words of 17- and 29-Across and the first words of 45- and 63-Across]. The answer is TO BE OR NOT TO BE. The relevant theme answers: 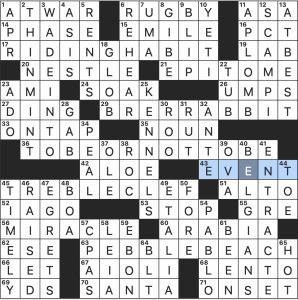 HABIT and RABBIT rhyme, and one has two Bs. Two Bs or not….same for TREBLE and PEBBLE. Cute!

What I didn’t know before I did this puzzle: that PEBBLE BEACH has hosted six U.S. Opens.

Evan Birnholz wrote a lovely interview with Lynn – you can read it here. It contains spoilers for Sunday’s WaPo puzzle. 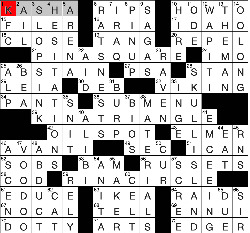 If this one took you a little longer than normal, take heart: It’s a 16×15 grid, so a few more words than normal. I also think that both fill and theme were a little more Tuesday- or Wednesday-ish than for a Monday, as I’ll get into below.

First, the theme, which is fun because it’s not the typical three-themers-and-a-revealer fare. There’s not a ton of thematic material for a puzzle of this size — three themers total — but I’m impressed that the constructor found this many entries that worked symmetrically! We’re dealing with letters in simple geometric shapes that are symbols for something or other:

Straightforward when you look at it like that, but I do think when you run all the letters together, you have a good chance of confusing a beginning solver. (“What the heck is a PINA SQUARE?”) This is part of why I’d have run this puz later in the week.

I also think entries like AVANTI, SCREE, WAPITI, and especially SLOP SINK, which wanted very much to be SLOP PAIL at first, put this puzzle squarely in the too-hard-for-Monday category.

I enjoyed seeing MATERIALS clued with reference to the Philip Pullman His Dark Materials books, which I read for the first time last year (yeah, yeah, I know I’m extremely late) and loooooooved. SKULL ISLAND is also a fun long non-thematic entry.

Despite the title, there’s no turning of entries involved with this theme. Instead, we have circled letters that comprise a REVOLVING DOOR (60a, [Entrance of a sort, and a hint to the progression in the circles]). Each long entry has the letters of DOOR off-set by one square as they progress down the grid, with the final letter of an entry “revolving” to the front in the next entry. 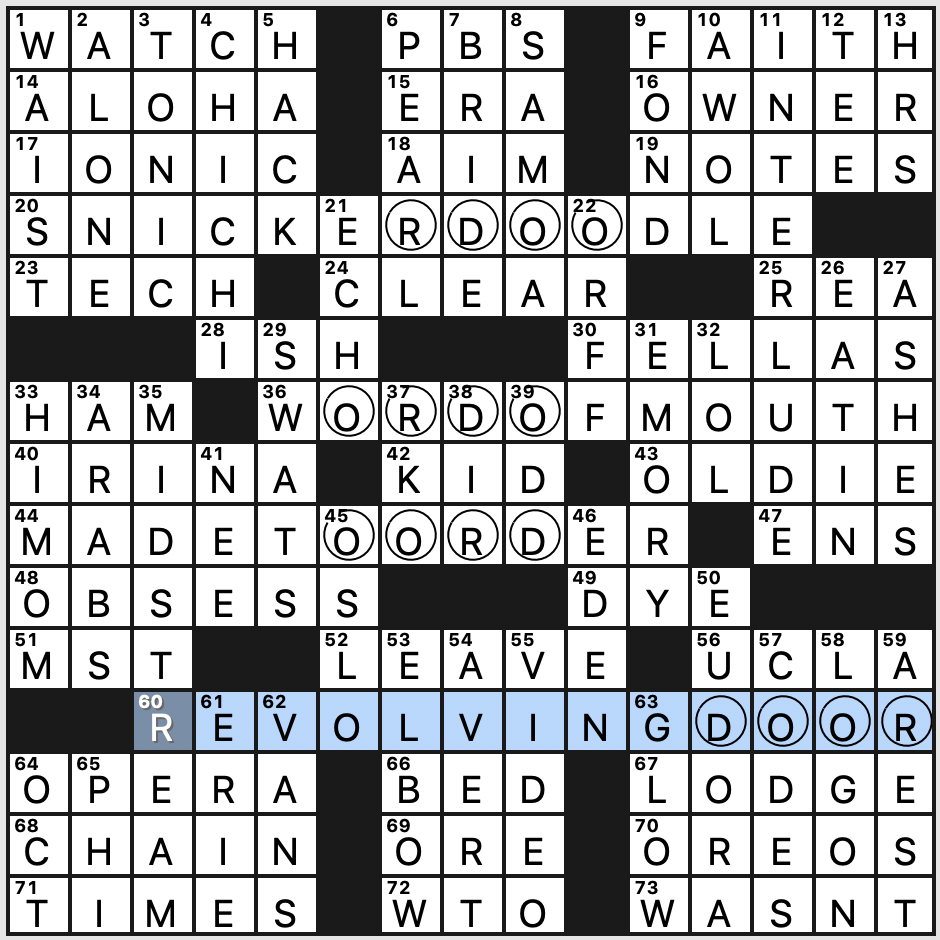 Nice, lively choices for theme entries, and they execute the theme perfectly. We’re accustomed to seeing anagrams in situations like this, but this is harder to pull off since the letters must maintain their overall order except with the last letter is moved to the front each time. To do all that and still maintain entry symmetry and make it lively is a job well done.

Moving to the long fill, we find an INTERLUDE and MIDSTREAM. Nothing extra sparkly, but they’re solid enough. I like FELLAS, EUDORA Welty, and CHICHI.

One clue of note: 35d. [Inadvisable place to change horses]. MIDSTREAM. Is there a metaphor going on here that I’m not recognizing? Who’s changing horses in the middle of a stream? Or should the answer to the clue really be “midstride.” Ah, never mind, I just looked it up and see it’s an idiom I never heard before.

A clean grid and a well-executed theme. 3.8 stars.

Hi team — the New Yorker Union is has authorized a strike, so I won’t be solving their puzzle until the strike authorization is resolved. I *will* probably go back and solve after the fact, so I’d be happy to update these posts with short write-ups once the strike is over. (Edited to reflect that they aren’t currently on strike) 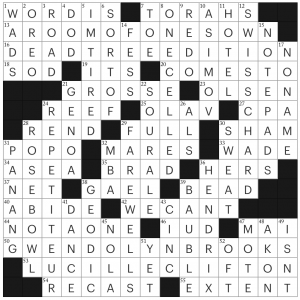 Union negotiations are continuing in good faith, and they ask that we not stop blogging the puzzles while negotiations continue so that solvers don’t miss out on the hard work of the constructors. Here’s the writeup of Natan’s puzzle!

I really, REALLY enjoyed this one. I love the shape that facilitates a 14/15/15/14 marquee set, and I extra love all four of the marquees: A ROOM OF ONE’S OWN / DEAD TREE EDITION / GWENDOLYN BROOKS / LUCILLE CLIFTON. These last two were clued in reference to specific poems, both of which I actually knew (!!), which made this puzzle much easier for me than your typical New Yorker Monday. This puzzle was also chock-full of references to other things I love. Some examples:

Overall, tons of (belated) stars for this puzzle. 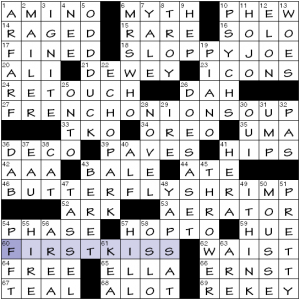 Food and romance. They go together well.

As a theme answer, the revealer is the weakest of a fantastic bunch. But as it does double duty it’s more than adequate.

For those who aren’t aware, butterfly kiss as a term dates back to at  least 1883 and is defined as “the act or an instance of fluttering one’s eyelashes against another person’s skin”. This is an especially apt name as the mouth is not involved, and butterflies lack mouths. They ‘taste’ with their feet and ingest through their proboscis.

Quickly – need to go back to work.

Here’s the grid. Highlights for me: 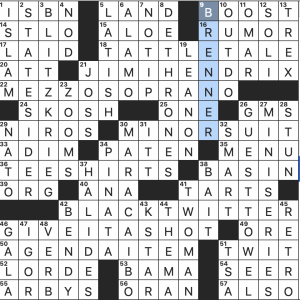 What I didn’t know before I did this puzzle: that BRENNER Pass is between Italy and Austria, or that diamonds and clubs are MINOR SUITs in bridge.