This week we’re told, The answer to this week’s contest crossword is a three-word phrase that’s something you might ask for in a restaurant.

Hey everyone, this is Conrad. I’ll be helping my friend Laura by taking on some of the WSJ meta write-ups. One across (ADD) has the following helpful clue: “Put smaller numbers together to get a larger number, as you’ll do with 23 answers here.” Having noted many islands while solving the grid, I added them to my notes. Missed a few (like RAB) on my first pass, but eventually found the 23 themers: 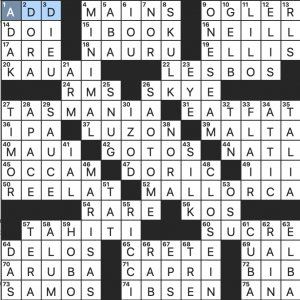 Next step: how do I “put smaller numbers together to get a larger number?” I ran down various dead rabbit holes, such as: 18A (NAURU): 1 + 8 = 9, mapping to grid location 9 (“O”). 1A only has one letter, so let’s assume 1+0 = 1 (“A”). That forms the gibberish string “OGDMSOGEMNLEGLNSGASONGE” (across, then down order). Even accounting for ambiguity, no amount of anagramming will pull signal from that noise. Next failed theory: ADD spans the numbered squares 1, 2, and 3, ADDing up to 6, which maps to “I”. But NAURU only has one numbered square (18). The gibberish INEILS started to form before I bailed on that plan. Having exhausted addition for a while, I wondered if ADD was a hint for a later step, so I tried to circle all entries to find a pattern, focus on 5-letter entries, find patterns in the themer clues, and sort/arrange the islands by ocean, country, entry length, etc. All lead nowhere.

Hoping to get this wrapped up before Matt’s other meta hit at noon (and avoid the dreaded fate of juggling two metas at once), I decided to double down on ADD the next morning and brainstorm other ways to ADD the themers. As noon was approaching I had an idea: what if I tallied the numbers of the clues? Meaning: 1 (ADAK) + 18 (NAURU)… + 73 (SAMOS)? I had no idea how that could map to anything helpful, but it was a plausible rabbit hole I hadn’t explored, so I opened a spreadsheet and tallied.

The entries added up to 1000, leading to our meta answer, THOUSAND ISLAND DRESSING. I could not find confirmation that dressing is the third word (in the grid or clues), but “a three-word phrase that’s something you might ask for in a restaurant” locks it in.

That’s the first time I’ve seen this mechanism, and it led to a great “aha” moment. I suspect that folks with less meta crossword solving experience may have had an easier time with this one than experienced solvers. I kept trying to map things back to the grid (a common meta mechanism), and would have probably found the answer more quickly by simply adding the grid numbers if I were new to metas. Here’s a hint I gave an experienced solving pal: If you had never solved a meta and were told to ADD the numbers of the themers, what would you do?

My hat is off to Matt: what an amazing meta, with an equally impressive construction. I have no idea how he continues to break new ground and design new meta mechanisms. I’ll leave you with a beautiful cover of Islands in the Stream (written by the Bee Gees and originally recorded by Dolly Parton and Kenny Rogers), recorded by The Running Mates.