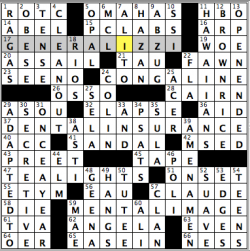 Good day, everybody! Here is hoping you are all doing well as we head towards Easter Sunday. Good luck spotting the Easter Bunny out there!

This puzzle definitely can be defined as a “great” puzzle, given that each of the theme entries have the letters ALI spanning two words in the puzzle, a tribute to “The Greatest” himself (60D: [“I am The Greatest” boxer who appears in five horizontal answers]).

Not sure if this happened to some, but the crossings of General Izzi with HAZAN (8D: [Italian cuisine doyenne and cookbook author Marcella ___]) and/or ABZUG could have made solvers take complete guesses with the Zs included in it (9D: [Social activist Bella ___, co-founder of the National Women’s Political Caucus]). Izzi was familiar because I watched the sequel, and also was familiar with Abzug, so no problems there even though Hazan is new for me. Biggest thing to stand out other than what was previously mentioned was the vertical stacks of nines in the Northeast and Southwest! Real pretty, with BROWN RICE standing out because I’m about to make some tacos here at home and deciding whether to use that or white rice to fill the taco (12D: [Healthy sushi roll grain]). Spring is here, so definitely time to CLEAN OUT a few things after being pretty much holed up all winter (4D: [Completely drain, as a bank account]). Interesting fill with the double feature of AMEN AMEN, as I usually don’t hear too many people say that words in succession (39D: [“Hear, hear!”]). Given that the frequency illusion occurs to me a lot, I’ll be here in this space next week telling you how I heard that at some point between now and next Tuesday! You watch!!

“Sports will make you smarter” moment of the day: RIOS (18D: [Ocho ___, Jamaica]) – On March 30, 1998, Chilean tennis player Marcelo Rios became the first Latin American man to be ranked No. 1 in the world in the ATP Tour. The lefty held the No. 1 spot for a total of six weeks while winning 18 career singles titles — including five Masters series events. Despite this, he is the only man in the Open Era (starting in 1968) to attain the world No. 1 ranking yet not win a Grand Slam title. The closest he came to one was the 1998 Australian Open final, losing to Czech Petr Korda.

Today’s theme is pop-culture wordplay, with four MONONYMous (going by a single name) musical artists embedded within longer phrases. And knowing the singers by name is entirely unnecessary to solving the puzzle!

Now, there’s no rationale for why the mononymous names would be sandwiched inside other letters, but let’s roll with it. A fine Tuesday theme.

Unfaves: ELEV, EELY, SLUE, airline ANA, ORR, ENID, ECLAT. These are on the hard side for a Tuesday puzzle, no?

I’m getting flashbacks of Harry Potter speaking Parseltongue with this puzzle. Either that or the grid is deflating. Each theme answer is a well-known two-word phrase with a triple-S spanning the two words. 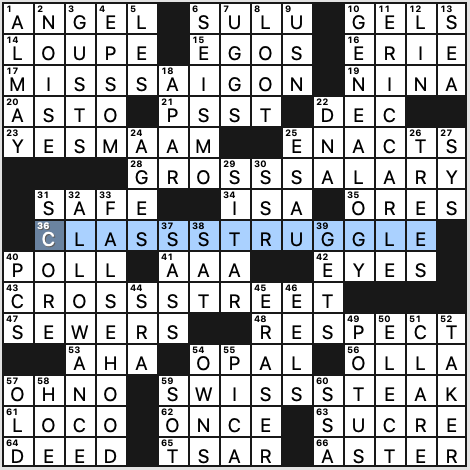 I couldn’t get too excited about this one. There are a healthy number of phrases that feature a triple-S, so I’d like to see some other constraint applied here if possible. At least ensure there are no extraneous S’s (such as the starting S in SWISS—GRASS SNAKE could fit in that spot).

In the fill, I liked seeing fully-named ERIC CARLE and “YES, MA’AM.” I also appreciated GENEALOGY, ALLOWANCE, and FALSEHOOD, something I like in my puzzle but not coming from my government (and thankfully there’s a lot less of that these days).

I really could’ve done without long prefix SEISMO and the strong dose of crosswordese: SSR, ESAU, A PAR, IS A, AS TO. I tried to see if I could rework that SE section with OLLA in it and I managed it after a few minutes putting ALLY in that spot. It comes with SMS in place of SSA, but I view that as an even trade.

Bottom line, the theme feels like it belongs on a Monday. The long fill is nice, but there was enough kludgy short fill to be noticeable. Three stars. 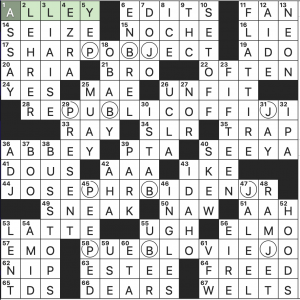 This whole puzzle is making me hungry!

I don’t know about you, but for me, sometimes a good peanut butter and jelly sandwich hits the spot. Crunchy peanut butter, and a jelly other than grape or strawberry, which are usually the main choices. Try peach! I like the entry at 44A, and I don’t think I realized he was a junior? Is there a Joe Biden III? In addition to being hungry, I also want to go to Fiji: I’ll bet it’s warmer there! 4.5 stars for this one. 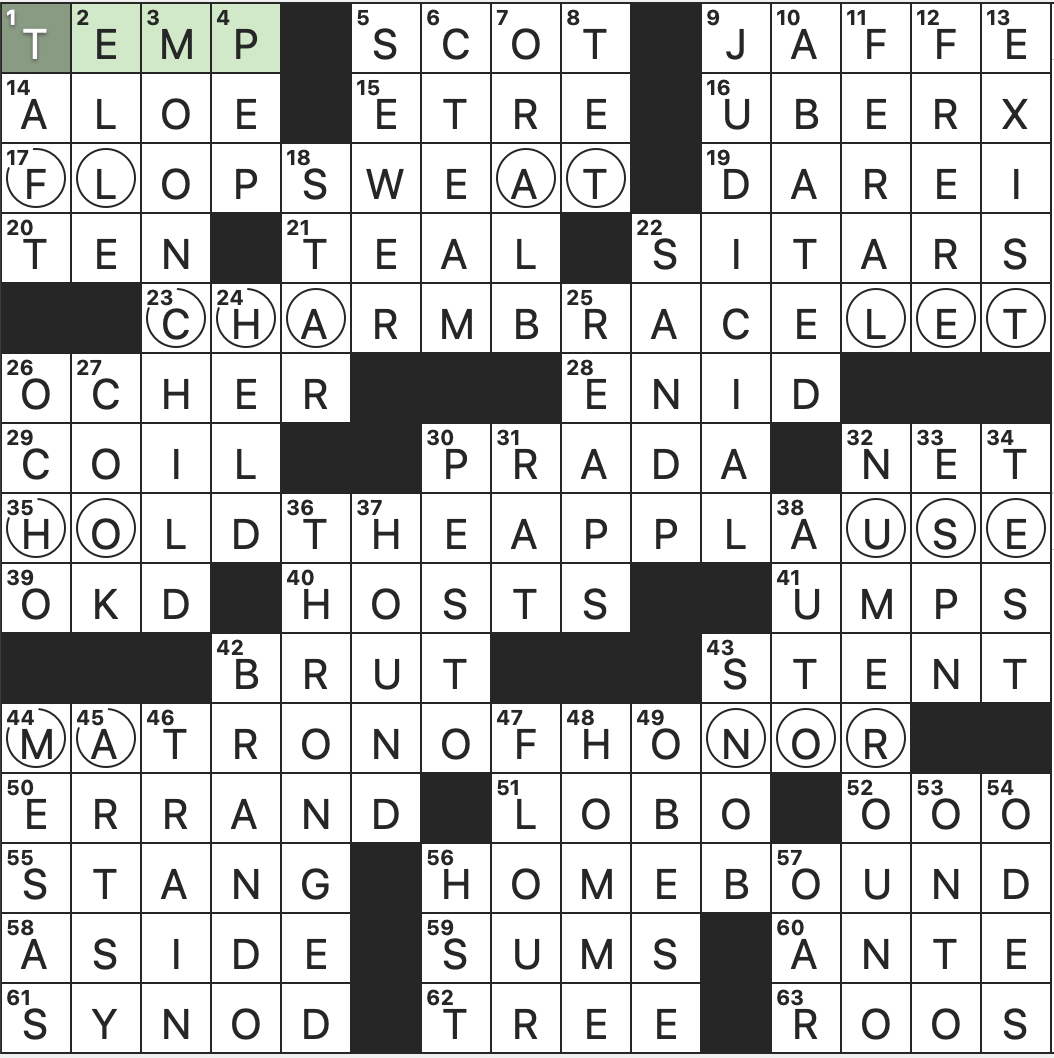 ANOTHER new byline to me! But a fun puzzle nonetheless. A new take on the quarantine we are all still under:

Very nicely done. We have flat, chalet, house and manor wrapping the theme entries. Just about hard enough for a Tuesday! Certainly easier than the Boswords themeless puzzle from the 29th. Ouch! 4.4 stars for this one.

THEME: Common phrases reimagined as if something is being transported. 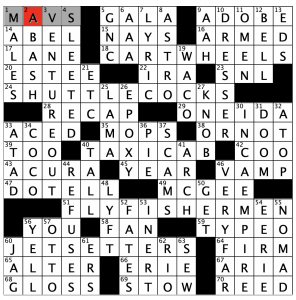 My third Lynn Lempel solve in so many days! Wapo. NY Times. And Universal today. Lucky me :) Of this trifecta, this one didn’t land as solidly for me. Still enjoyable, of course. Her puzzles always are. But just didn’t get too excited about the theme. SHUTTLE COCKS is a tad cringy imo (am I being juvenile?), and CAB being referred to as a white whine (as in cabernet sauvignon) is off. In 100% of my experience as a bartender and wine drinker, if someone is referring to CAB in discussion, it’s red. If they are referring to cabernet sauvignon blanc, they would refer to it by its whole name or just “sauvignon blanc.” Lastly, I don’t think of JET as a verb the way it’s being used.

One last nit is the clue for EDS [Puzzle tweakers, briefly]. It has a navel-gazing quality to it that I’ve seen in the Universal on more than a few occasions. I think once, ART was clued as [Crossword puzzle construction, for example] or something very close to that. Is it true? Sure. Just… I dunno… feels like it has too much of a *wink wink* attached. EDS in this puzzle felt the same.

Loved the clue for 35A [They may absorb stuff in classrooms] MOPS. Very accurate. MOPS frequently absorb more than the MIND(s) that I initially tried to enter.