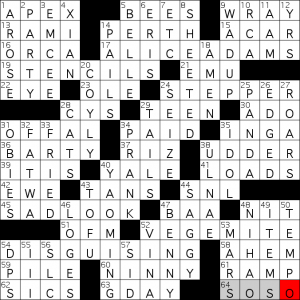 hello and welcome to episode #669 of matt gaffney’s weekly crossword contest, “Easy As A-B-C”. for this week 4 puzzle, the instructions tell us that we are looking for a five-letter historic place name. okay. what are the theme answers? well, i have no idea. let’s see if we can figure it out together! by which i mean, of course, let’s see (together) if i can figure it out (alone) while i write this post. you’re not really helping, you know that?

there are only two long answers in the grid: {1935 title role for Katharine Hepburn} ALICE ADAMS (a movie i do not know, based on a booth tarkington book i do know of but have not read) and {Putting camouflage over} DISGUISING. the latter does seem like it might possibly relate to a meta mechanism, but it’s not very specific about how the theme might be disguised.

the grid is unusual beyond its lack of long entries. the word count is 82, somewhat higher than you normally see in a 15×15 grid. and there are some areas of the fill which do not appear very constrained, yet contain some pretty iffy entries. like that little 3×4 corner in the upper right does not need to have A CAR crossing AAM and YRS unless there’s something thematic necessitating at least one of those; changing A CAR to ACRE would produce ARM and YES instead, which would be a clear improvement on all three entries. the symmetrically opposite corner has DPS, III, and SLC as downs, none of them lovely.

actually, the very first weird thing i noticed about the puzzle was before i had finished solving the grid, and it’s {It may evoke sympathy} SAD LOOK at 45a. that’s because i originally had written BOXES instead of {Seating in opera houses} LOGES, so i tried SAD BOOK, which also fits the clue and is at least as much of a thing as SAD LOOK. of course, that X did not work in the crossing answer (DISGUISING), but beyond that, i’m not sure anything special is going on here with alternate answers to clues. maybe PENCILS is an alternate answer to {Some graffiti artists use them} STENCILS, but that seems a little dubious.

the next thing i noticed was in relation to the title—the grid contains the entries {Airborne buzzers} BEES, {Take control of} SEIZE, {47-Across speaker, sometimes} EWE, all homophones of letters (either plural or singular). there’s also {___ on (commands to attack)} SICS for 6. however, this is probably just a coincidence; certainly the fact of a crossword grid containing the entry EWE is nothing noteworthy.

the only thing i’ve noticed so far that i feel pretty sure is relevant is the fact that five different across entries are all related to australia, with none of them mentioning australia explicitly:

so i think we’re supposed to be thinking about australia, but i really don’t know what the next step is. in the context of australia specifically, perhaps ALICE ADAMS is meant to get us to the town of ALICE springs or the nevil shute novel a town like ALICE, but it’s certainly less clear what to do with DISGUISING.

what about attempting to backsolve? thinking about australian places that have changed names and might be five letters (or have been five letters), the only thing i can come up with is AYERS rock, now called ULURU. or actually, now called uluru/ayers rock. it’s not a bad guess as a hail mary, even if i can’t find anything concrete to suggest it in the grid. there are rather more Y’s than you’d expect in a grid, so that’s something. (A, E, R, and S are all well-represented too, of course, but that’s very much to be expected.) and geographically, it’s close to ALICE springs, or at least closer than anything else.

i thought this might be one of those metas where coloring all the instances of A/Y/E/R/S in the grid produces a picture of ULURU (a type of meta i have utterly failed to solve every time it has appeared as a mgwcc mechanism), but that does not appear to be the case, even with some very determined squinting.

could the meta be based on some kind of correspondence between AYERS <=> ULURU, both five letters? i don’t really know how. there are very few U’s in the grid, but not zero. i don’t see anything that would become a recognizable word if you turned all the A/E/S to U’s.

so this could well be wrong, but as i have nothing else, i’m going to try it. either way, i’d love to hear in the comments section what i missed about this meta, because i feel like there has to be a great deal of thematic material all over the grid and i just can’t figure out what it is or how it’s working.