Our theme consists of two-word phrases whose second word is normally some type of contest. However, each one is clued with a different meaning (ensuring the phrases are “no contest”), and the first word’s meaning may change as well. 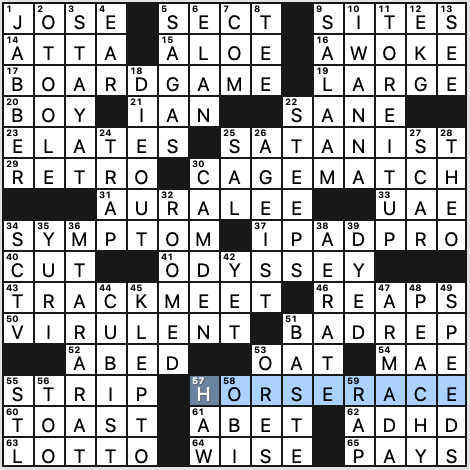 Everything about this makes sense and flows from the title. I just wish there was some funny here to go along with the wordplay.

I do like the fill, though. MT. ARARAT goes along with the Noah’s Ark entry, and there’s also TORE IT UP, SATANIST, ODYSSEY, VIRULENT, IPAD PRO, KLEPTO, CUBIST, PEACHY, CAMDEN, SALAAM, and “I WANNA!” That’s a heavy dose of sparkly fill.

I didn’t know AURA LEE [Civil War song whose melody was used for “Love Me Tender”]. I tried ANNA LEE first, but was able to sort it out before too long. You can listen to it here.

The theme works (though it just didn’t sparkle), but the the fill is very good. 3.4 stars. 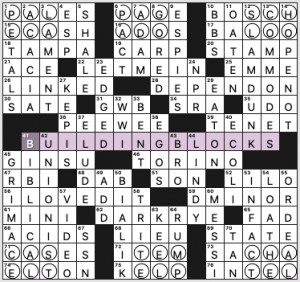 BUILDING BLOCKS is the name of the game, and those six Lego-shaped chunks of circled/shaded squares spell out, clockwise from top left, 6-letter types of buildings: PALACE, PAGODA, SCHOOL, CASTLE, TEMPLE, and CHALET. I’ve not been in all of those! The central revealer is clued 41a. [Smaller parts making up a larger whole … with a hint to the six groups of circled squares in this puzzle].

Nothing else is thematic, I don’t think. Trenton managed to get some good longer stuff packed into the grid, like SLAM-DUNK, GRIMACE, and “I LOVED IT.” Just a few bits of fill that irked, like OATEN and KEPIS. The six sections with the 6-blocks are remarkably smooth, though.

I know the ACACIA tree, sure, but it doesn’t mean I don’t forget that it and AÇAI exist when I’m playing the NYT’s Spelling Bee puzzle. Who’s with me? 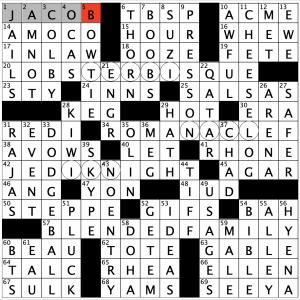 Aimee Lucido has this week’s AVCX, and it’s a pretty straightforward theme:

The Brady Bunch and the Kardashian-Jenners are both examples of a BLENDED FAMILY, and each theme entry’s circled squares are the “blended” letters of another word for family – TRIBE in LOBSTER BISQUE, CLAN in ROMAN A CLEF, and KIN in JEDI KNIGHT. 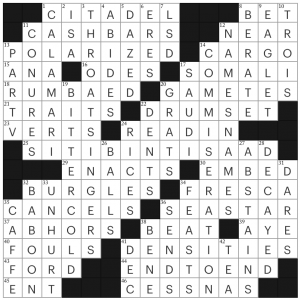 Hi all– First, we’ve heard from members of the New Yorker union that although a strike has been authorized, negotiations are currently continuing in good faith, and they’d prefer that we continue solving and blogging the puzzles for the time being. I’ll update Monday’s post with Natan’s puzzle soon, and in the meantime, here is Erik Agard’s puzzle for today.

Short write up again because, as often happens on Wednesdays, I have to teach in half an hour and, as often does NOT happen on Wednesdays, there are men jackhammering in my basement to fix a water problem!

Overall, tons of stars from me for a fun, fresh puzzle. Wish me luck teaching as the jackhammering in my basement and skull continue unabated.

PS. when I wrote the date on today’s puzzle, I initially and without thinking wrote November 31, 2020, so… take that fwiw I guess?? 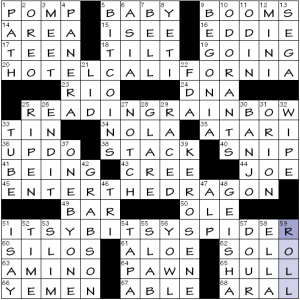 Tough to criticize a sushi-themed crossword, even if these futomaki varieties are not among my favorite types of makizushi. Of course I am now dreaming of sushi for lunch, but it’s been quite a very long time since I’ve had proper sushi. Curses!

Something about sushi? Something from the excellent SILOS (60a)? My favorite cover version of the otherwise execrable “HOTEL CALIFORNIA”? Some ONE BY ONE (37d) thing? So many choices. 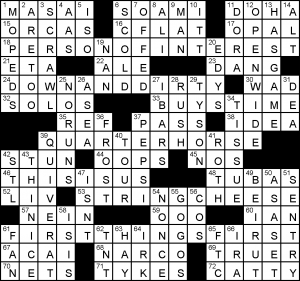 The plus-size revealing answer seems to have been the starting off point for this puzzle: FIRSTHINGSFIRST. Each of four answers’ first words satisfy “First ___” – FIRST PERSON, FIRST DOWN (apparently this is a gridiron thing), FIRST QUARTER, and FIRST STRING. That sure is a lot of sports, especially with QUARTERHORSE as well!