Our theme consists of common phrases whose first or last few letters spell out a type of tree. The tree part of each phrase is cut off from the rest of the letters by a block. Not only this, but in an impressive feat of construction, this cut, represented by a single diagonal slash down the grid, separates all the trees from their base phrases. And everything fits symmetrically to boot. Very impressive!

Each half of the phrase is clued in two parts, with the beginning as the actual clue and the ending as some sort of tree pun. 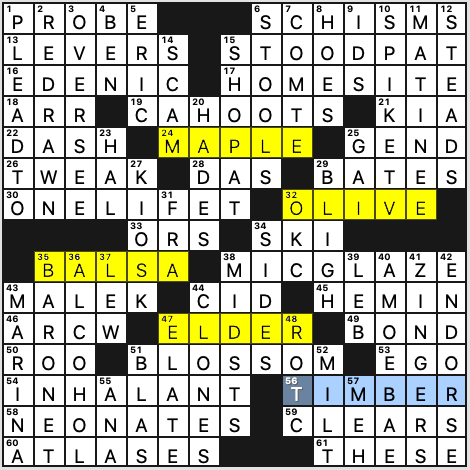 This was an incredibly timely theme for me as for the last 24 hours I’ve been engaged in a tree pun discussion with a Facebook friend as I tried to describe the nearby beach we visited that was awash in driftwood. Here’s a sample: “It’s a very poplar beech fir alder right reasons. I kid you knot! If you deciduous to go, be sure to cedar sea lions. Makes for a nice little st-acacia-n. So pack a trunk and leaf at once. Sound like fun? Yew birch yer aspen!” I’m especially proud of that quad-string of puns in the first sentence. Thank you, thank you. I’ll be here all week!

Back to the puzzle. I know that Jeff likes to put together a grid that has a visual impact, and this certainly does. Not only is there that thematic slash from the NE to the SW, but the rest of the grid feels so wide open with 7s and 8s galore.

That said, I didn’t find a ton of sparkle there, no doubt due to the constraints of the theme answers. ZINGERS and CAHOOTS are the best of the lot, and I liked SPIKE TV. But I wanted just a BARON instead of BARONET and INHALER(S) instead of INHALANT and EL CID instead of just CID. Then there’s the awkward MIDSTS and the 18th-century French novel “Gil BLAS.” Add to those some quite opaque clues (especially in the NW for me), and the puzzle threatened to get sloggy. But I worked my way through and was rewarded in the end.

Oh, this is a debut for Jeff’s partner, so congrats! It’s an impressive grid all around. Four stars from me. 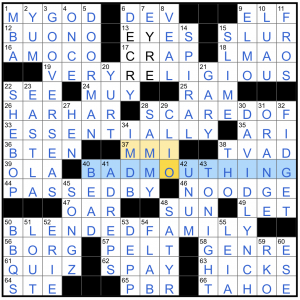 I sat and stared at the completed grid of Sam’s puzzle for a full five minutes before what’s going on clicked for me.  It’s a groaner, y’all, and it needs an extra breakdown.  Let’s go clue by clue, or more appropriately, clues by clues.

Well, 6A is “Actor Patel of “Slumdog Millionaire”, and that’s DEV.  DEV with “out” (as in the word out, from the clue) is “Devout”, which means VERY RELIGIOUS.

This puzzle is all about being literal.

9A is “Film in which Will Ferrell wears yellow tights”.  That would be ELF, and “Inits” before ELF is “In itself”, which is a clue for ESSENTIALLY.

37A is “Start of the third millennium”, which is MMI.  Placing MMI in “slang” makes “Slamming”, a clue for BADMOUTHING.  Finally:

64A is “French holy title: Abbr.”, or STE, and 65A is “Cheap beer choice, for short”, which is PBR.  STE and PBR “and others” makes “Stepbrothers”, which can clue BLENDED FAMILY

I thought this one was clever, even if it took a second to figure out what the heck what was going on once everything was filled in.  All that AND DAVID LYNCH in the grid?  I’m set.

I just felt the need to do a little research on the “Where’s the beef?” lady of Wendy’s commercial fame. Clara Peller. She landed that gig at 81 years old and was a manicurist on a TV set the time she was discovered. Her Wikipedia page is a quick and worthwhile read.

THEME: Types of meat need to be deleted from theme answers in order to the clued to make sense. 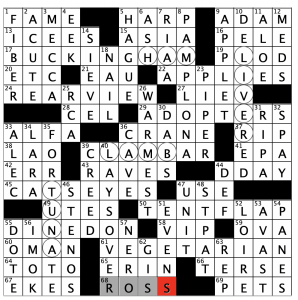 Very cool puzzle. It has that little Thursday kick to it that Universal has been doing a bit more of since February. I solved the version with circles in AcrossLite. I’m assuming that the APPLET and the print version still don’t have circles (which annoys me to no end as it’s essentially offering two different solving experiences), but I don’t think this puzzle suffers for it. In fact, I think it would be a better AHA if there was no indication at all of the hidden meat and the solver had to figure that out, but perhaps that’s a bit too tricky for Universal‘s target solver.

It’s chock-full of references with other animals (safe from consumption thankfully) what with TOTO and CATS EYE. And don’t forget to SPAY your PETS before heading off to the Running of the Bulls in PAMPLONA!

Five strong themers and a nifty concept makes up for a couple dings in the fill: I think you should only be allowed one EKE/EEK per puzzle. RIP crossing RIPA was a bit weird too.

Good start to the puzzling day.

4.5 stars from me, with or without circles.

Brendan did indeed fool me once. I thought I had the gimmick figured out when I filled in the first theme answer. Nope. Not surprisingly, the real gimmick was better.

The theme answers are all wacky, as is appropriate for the day. 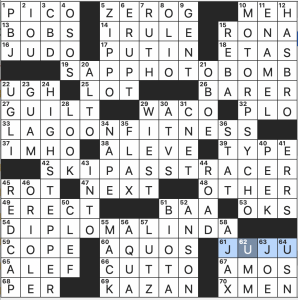 Eventually I realized that each theme answer has a base phrase + a synonym for FOOL. SAP + PHOTO BOMB. GOON + LA FITNESS. ASS + SKIP TRACER. DIP + LOMA LINDA. Much better than my first thought!

Gotta get back to work. What I didn’t know before I did this puzzle: never heard of the Russ Meyer movie BIKER PSYCHO. I am not going to seek it out.

I’ll leave you with the sound of my youth. I’m an ALTO, so I worshiped LINDA Ronstadt, and this album was released the summer I turned 16. This Karla Bonoff song is still one of my favorites.

By the way, if you haven’t seen the documentary about her life, “The Sound of My Voice,” it’s available to stream on several platforms. I loved it.

It’s April 1st so we have the annual appearance of Trip’s Cuckoo Crossword. I enjoy solving these and I never know what to write about them, so I’ll just list a few of my favorite entries and leave you with the grid to peruse for yourself. 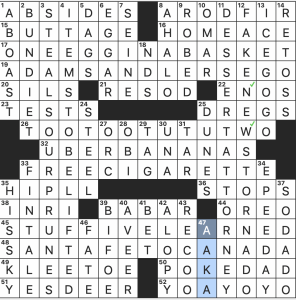