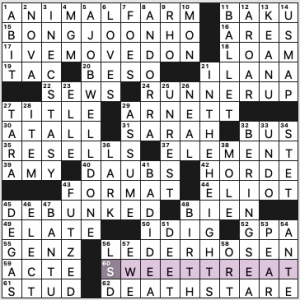 What a SWEET TREAT! This grid is amazing, chock-full of wildly great fill. The two corner stacks of 10s, intersecting with 12s that tie the rest of the grid together? Love ’em all.

Colloquial language is here, too: “I’VE MOVED ON,” DEATH STARE, FUTZED, A JOB WELL DONE, GEN(eration) Z. And I always like a little geography, so BAKU, ANDORRA, and the BERING SEA were nice pops. 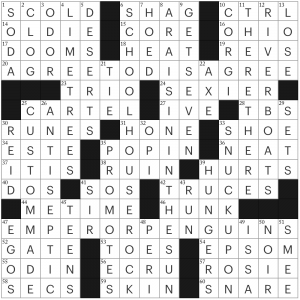 Happy Robyn Friday! This is a super impressive construction, with four interlocking 15s and silky smooth fill and cluing.

Those 4 15s are all excellent: SCHOOL HOUSE ROCK / A RAISIN IN THE SUN / AGREE TO DISAGREE / EMPEROR PENGUINS. Interlocking! With tons of other amazing long fill like CUSTOM-MADE / ANTISEPTIC / THERE THERE / RIVER BOATS./ LIME TREES / SNUCK UP ON, I can’t overstate how impressive this all is. And the short fill! It’s so clean! There are only two bits of true “crosswordese” (as I see it): ECRU (classic) and SMEE, which gets Robyn cleverly and alliteratively clues as [“Peter Pan” pirate popular in puzzles]. Literal lol on that one.

The only place I tripped up with in the south, where PERI and TOYS crossed. Not knowing who PERI Gilpin is, and going too fast to process the ? at the end of [Stocking stuffers?]. meant that I ended up with PYRI Gilpin, but I found the error quickly enough (and also that’s a great misdirect).

Overall, all the stars from me. What a great start to the weekend!

The title is a hint that each theme answer starts with a C and ends with a U. 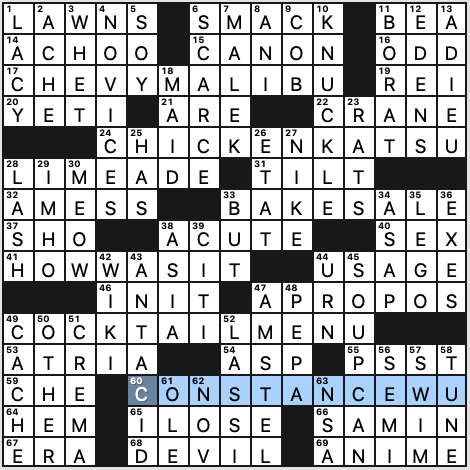 As a constructor, I think I dislike the letter C the most. It tends to put unexpected constraints on your grid. With the weird letters like X and Z, you know what you’re in for and how to deal with them. But with C you’re lulled into a false sense of normalcy—that you should be able to fill the grid just fine—until you’re boxed into a corner.

And then, with this theme, each entry has to end in U. That in itself is an uncommon enough occurrence, relatively speaking.

But Nate handles everything wonderfully with lively entries and solid crossings and fill. I admit to not knowing the actress’s name (I still haven’t seen the film yet), but the crossings were more than fair. (Same goes with the name below it, SAMIN [“Salt, Fat, Acid, Heat” chef Nosrat]).

The long fill—though nothing is longer than 7, probably due to those pesky Cs—is strong, considering: NOVICES, KNUCKLE, ANTACID, and SOUP CAN. And then there are some nice additions in the Across direction: LIMEADE, BAKE SALE, “HOW WAS IT?” and APROPOS. 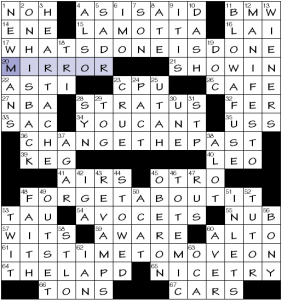 But then there’s this (unintentional?) deflating zinger: 65a [“So close!”] NICE TRY.

Theme works for me.

I used to end my college radio show with this cover of John Lee Hooker’s song.