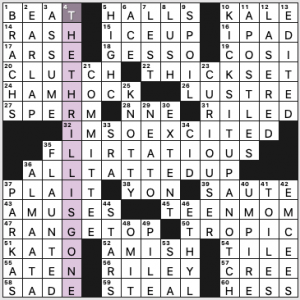 4d. [Blues classic that contains the lyric “I’m free from your spell”] clues “THE THRILL IS GONE,” and that’s more or less my vibe in solving this puzzle. Started right off with 1a. [Kind of poet], thinking “BARD? Please don’t let it be BEAT (as BEAT by itself is not a sort of poet).” And it was BEAT. ARSE and SPERM in the same corner, plus EARLAP? Meh.

Fill I liked: “I’M SO EXCITED,” but only because it made me think of the Pointer Sisters song (didn’t love the [“Squee!”] clue because the entry feels maybe a touch contrived? See also: ALL TATTED UP). FLIRTATIOUS. TEEN MOM. FLAUNTED. KNOTTY. Carroll’s CURIOUSER. And KICKS IT UP A NOTCH is good.

THEME: The words OVER and OUT must be “inserted” into theme answers to split a common phrase/word up into two different phrases/words in order for the clues to make sense. 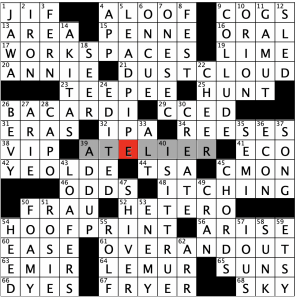 Wow. This was pretty cool. Quirky and daring, especially for Universal which, more often than not, tends to run over-the-plate themes. This was a fantastic solve experience for me as I could *sorta/kinda* see what was going on but didn’t fully appreciate it until I was done, so it kept me guessing and had a mysterious quality to it. Great finds by Alex all around, though I must confess I would love it if OVER AND OUT were the title and there were one more themer in its place. Something about the title “Inner Insertion” doesn’t sit right with me. Still, it’s quite remarkable that base phrases where this pattern works a few times over exist at all.

I ignored the instructions where I was asked to count letters and let the theme reveal itself without that crutch, which I find preferable to the nudge. But I appreciate the existence of that push in order to make the solve accessible to a broader audience. It’s also the type of puzzle that has potential to provide a strong AHA to a newer solver and hook them on crosswords for life.

Anything else? Let’s see… JAWA is new to me. But I’m not a Star Wars guy. I had JEDI and then JAB(b)A. I’ll get around to watching that franchise someday. I know a heck of a lot of Star Wars vocabulary from crosswords, but there’s no real context for me (for instance, I know EWOKs are from ENDOR… whatever that means).

I don’t think VIPs should skip lines. I had a friend who told Rudy Giuliani that there was a line when he tried to cut ahead of everyone to get a hot dog at a Yankees game. And that was back when people liked him.

Lastly I don’t call CHORDS “groups of musical notes.” I just call them “groups of notes.” :)

Fill wasn’t all that bad though, especially considering that some of the themers are right on top of one another.

Awesome puzzle today. 4.9 stars from me.

Would be 5… but that title! Yeesh. 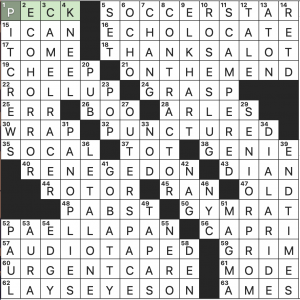 This puzzle has a momentous occasion for me: I see the entry ELKHART in a puzzle! According to xwordinfo.com, it has appeared 5 times since 2000 in NYT puzzles, but I don’t remember seeing it in a puzzle. For some reason, I remember seeing clues for Elkhart Lake, WI more often that a reference to the city I lived in for 25 years! The clue [South Bend suburb] threw me for a loop, though, as it isn’t really a “suburb”. But that is mainly because South Bend isn’t big enough to have “suburbs”! With the answer being 7 letters, I thought it might be GRANGER or OSCEOLA, but ELKHART is a city of 50,000 people that is a full 20 miles or so away in a separate county! It isn’t even that much smaller than South Bend, whose population is barely over 100,000. Mayor Pete and Notre Dame have put South Bend on the national map, but if you have ever bought an RV, chances are high that it was made in Elkhart or the surrounding area, where there are literally dozens of RV factories. When conversion vans were the rage in the late ’70s and early ’80s, those were made there too. I am getting wordy, but even though I never want to live in Elkhart again, I have family there! So my puzzle enjoyment had a great “a-ha!” moment seeing this entry. Thanks, Ryan! 4.8 stars for this phenomenal themeless.

I also enjoyed Ryan’s interview from this past week’s Boswords Spring league. You can find that here if I copied the link correctly! If not, it is on Twitch and also on the Boswords site. I feel like I know him now, even though I don’t think we have ever met!

Also, there are other entries besides 7-Down!

That is all for now! Off to work on the newest Panda, which I haven’t spent enough time on. 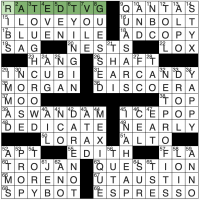 This one fell quickly. I had a slightly tough time in the lower areas of the puzzle, especially the SE corner, but the upper half was filled in quite rapidly. I was a little surprised how quickly it was filled in, but this is still a hard puzzle. It just showed its teeth a little later than normal. There are some interesting entries in this puzzle, including that SE area, and I will mention those below. But in summary, this puzzle did not induce an anxiety attack or a fit of anger, which may or may not have happened in the past! A solid 4.4 stars for this slightly kinder toughie. 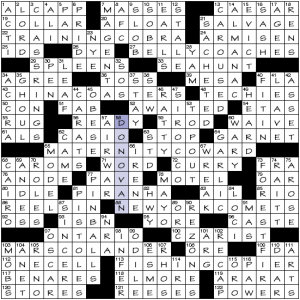 The bigram CO is placed inside words and phrases to wackify them. Seems apt for the newspaper of businesses. 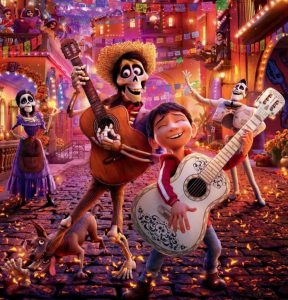 Fine little theme. Also, Disney’s Coco (2017) is one of the few recent films of theirs that I’ve seen, and it’s very good. There’s a XOLO in it!

COs are not expunged from the rest of the grid, and can be seen in entries such as the maybe-tricky, maybe-not-that-good 19a [It might end in a tie] COLLAR, the clever 50a [Take in] CON, and the nifty 47d [Hot Mediterranean wind] SIROCCO.

Difficulty of the solve is increased slightly by editorial choices in cluing such as CON above,  41d [Permission] for LEAVE, the misdirection of 44d [Diamond figure] CARATS (not baseball!), and the obliqueness of 63a [Pull up] STOP. This is not a bad thing at all.