Write-up and grid after dinner. Feel free to comment in the meantime! 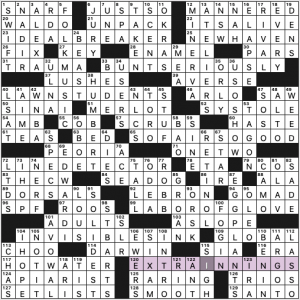 —I’m back. Theme revealer is EXTRA INNINGS, timely for the start of baseball season. Clue is 120a. [Ballgame extenders … and what can literally be found in the answers to the asterisked clues]. The other themers are made by adding I, N, N, I, N, G, S to familiar phrases:

Having the added letters spell a relevant word makes for a more elegant them than just adding the same letter to all the phrases.

4.25 stars from me. Angela and Doug, I forgive you for the plethora of sports clues!

If the best thing I can say about the theme is “at least it’s not completely made up like last week’s,” that’s – not great. Each theme answer contains a symbol seen on the top row of the keyboard (at least on the top row of my keyboard). This morning the role of the circles will be played by the color red. 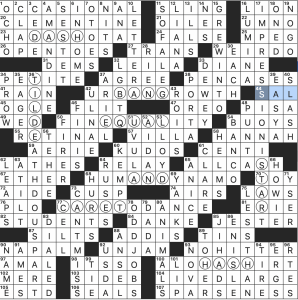 I’m on call, so I’m both tired and cranky this morning. I wouldn’t have liked this theme even if I were on vacation (although then I wouldn’t have had to write about it).

What I didn’t know before I did this puzzle: never heard of the Muppet SAL Minella, and I’m not happy that I have now.

THEME: Pop songs whose titles are reminiscent of Broadway musicals. 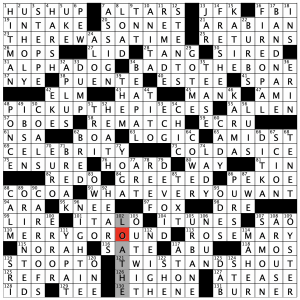 This was fun :) Over-the-plate type theme with no extra bells or whistles attached. I half-expected the first letter of each song to spell something out, which is a familiar motif of Evan’s when he publishes a seemingly simple theme. But nope! And that’s totally fine.

The apt songs are appropriate for the musicals’ titles of course, not the musicals themselves. After all, Elphaba certainly isn’t BAD TO THE BONE, and Carousel (a musical I’ve always found rather disturbing) doesn’t really have anything to do with MERRY GO ROUNDs. But it was a good time to draw the connections between the songs and titles. I was able to get TWIST AND SHOUT with no crosses, but that was the only one.

There’s a number of musicals out there whose titles are already songs. Those are often the jukebox musicals to which the title is referring. Off the top of my head…. ummm… Mamma Mia, 9 to 5,  Movin’ Out… those last two aren’t really jukebox musicals. Oooh… how bout Bat out of Hell: The Musical? That was awesome. So very bad that it was so very good.

I’m trying to remember the last Broadway musical I saw before the shut down. I go (err… went) to theater so frequently in New York that I can’t remember. I know the last play I saw was The Minutes, by Tracy Letts. Loved it. I’m one of a handful of audiences that saw it after it opened. Perhaps it was the Bob Dylan musical? Girl from the North Country? Yes, that’s probably it. Broadway is supposedly re-opening in September, but it actually opened (however briefly) a couple days ago. I will say that I’ve saved a boatload of money this last year without feeding that habit. But I can’t wait to go back.

Anyhow, back to the puzzle. Good fill. Fresh clues. All that jazz. What were the new names for you? For me it was Carrie NYE, aptly a Tony nominated stage actress, ANITA Dongre, ERIN Moriarty, Deanna TROI, LUIS Arce, and Sean MAHER. I think that’s it. I have yet to watch MANK, so that name wasn’t on the forefront of my mind either.

Thanks for the puzzle, Evan!

Today’s theme changes some P’s to Q’s in well-known expressions with the revealer MIND YOUR P’S AND Q’S (117a, [“Behave,” or a theme hint]). 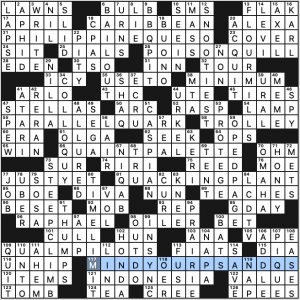 So…a couple things. First, P’s aren’t just changed to Q’s; the Q’s come with U’s. It’s a package deal kinda thing, I guess. Obviously, you generally need the U’s when working with Q’s, but it’s just odd when the idiomatic phrase specifically calls out certain letters but not U’s. So it’s just one of those things. We accept it or we don’t, and we move on.

Second, I would normally say that there shouldn’t be any other instances of the changed letter in the final answers, but here our constructor made that a feature instead of a bug. The original phrases were all double-P’d phrases (both words started with P). But only one of them changed—sometimes the first, sometimes the second. But the phrase is MIND YOUR P’S AND Q’S, so it’s up to you to determine which ones are altered and which aren’t. So, yeah, I’m okay with that.

Where does that leave me? If I’m okay with the U’s tagging along, then I like the theme just fine. It’s not overly thrilling, but it works well enough. And dealing with all those Q’s definitely puts a strain on the fill. Let’s check that out.

COLLOQUY, PIQUE, NIQAB (all nice), ACQUIT, SHAQ, QUIT (solid), and BBQ PIT (okay, I guess). On the whole, well-handled. What else is nice in the fill? FLOUR MILLS, STEEP CLIMB, TIME LIMIT, BAIL OUT, PRAIRIE, OP-ED PAGE, INDONESIA, new Senator RAPHAEL Warnock, and the CASPIAN and CARIBBEAN Seas. Strong fill for the most part.

I’m still not totally okay with the whole QU thing, but what else could be done with it? Very nice fill in the grid, though. 3.5 stars.