I stumbled around a little bit in this puzzle. That may mean it’s a smidgen harder than your average Monday puzzle, or it may mean that I’m in the home stretch of a weekend on call and my brain is mush. In either case, it’s a silky-smooth puzzle with an accessible, Monday-appropriate theme. I had no idea what was going on with the theme until I got to the revealer. That didn’t get in the way of solving.

All the theme answers have stars upon thars. 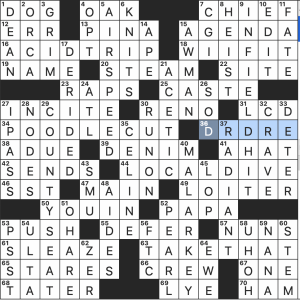 And the revealer: 63a [“So there!”…or what you can do to the ends of the answers to the starred clues?] is TAKE THAT! TAKE a HIT, TAKE a TRIP, TAKE a SEAT, TAKE a CUT, TAKE a DIVE. Nice! The longest entries in the grid are eight letters, so there are a lot of shorter words, including a bunch of three-letter answers. I didn’t bump on any of theme as egregious crosswordese. There are a few abbreviations and initialisms, and they’re mostly in common use. SST, of course, is an oldie and not-so-goody.

What I didn’t know before I did this puzzle: that Lucille Ball popularized the POODLE CUT. I also was unaware that DR DRE founded Aftermath Entertainment. 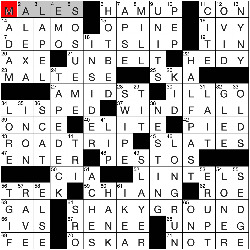 Here’s a puzzle with a revealer that I think would have been stronger without one. We get it at 64A [With “on,” not strong, as an argument … and what might cause the ends of answers to starred clues?], which is SHAKY GROUND. First of all, boy, is that clue practically a paragraph! Second, clues that begin with “With…” are falling out of favor, and deservedly so. Finally, if you happen to be working your way around the puzzle and not from the top down, I bet this one might lead you to think you’re looking for something more like rearrangements of the letters in the word DIRT. In fact, it’s just that each of the three non-revealer themers has a way to land on your butt, which I suppose could happen if you are on SHAKY GROUND:

If I had more time I’d try to brainstorm a themer to replace SHAKY GROUND with. Alas, I do not, and I’ll simply say that my favorite nontheme was entry TAPE DECK, which brought back some fun nostalgia!

Theme: Phrases with a double-I somewhere within. 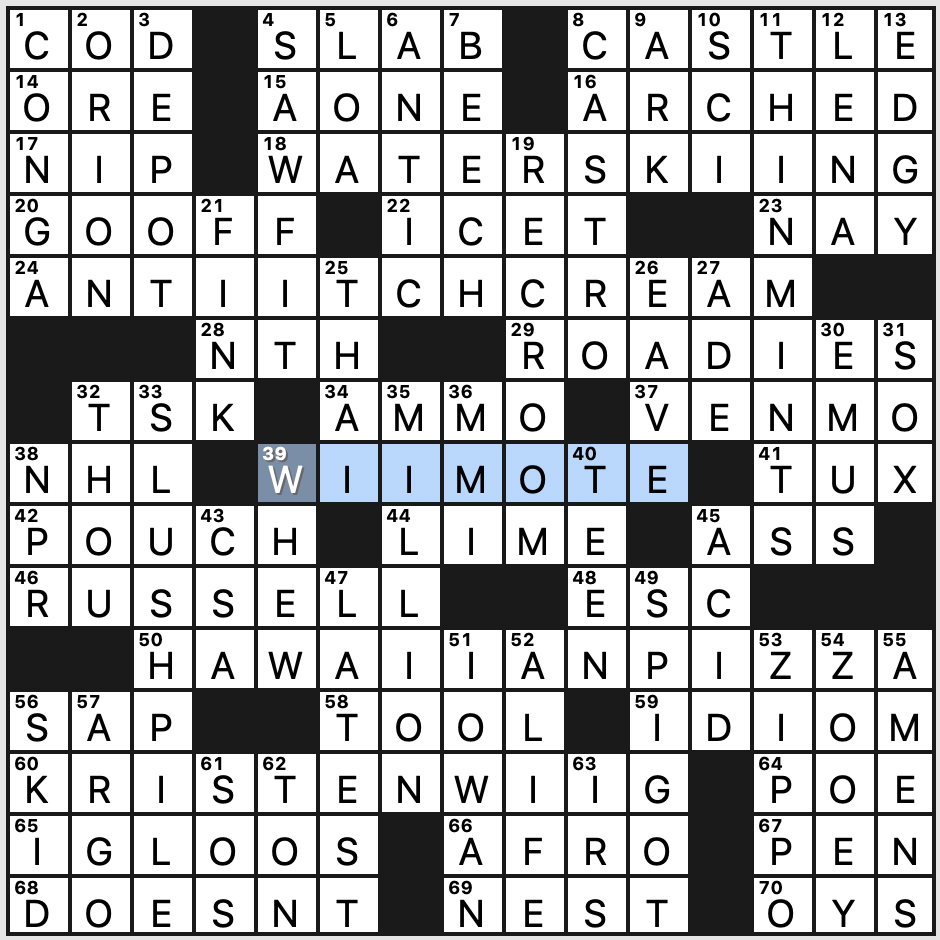 I solved this one for time and would have come in a whole 40 seconds sooner, but I put ZILCH for ZIPPO and didn’t check the crosses. Then I spent that amount of time looking for my error.

But since I was trying to speed-solve, I didn’t see the theme and filled in the theme answers mostly based on crosses. So essentially I solved it as a themeless, and that worked just fine.

Words with a double-I are fairly uncommon, but does that make them a good basis for a theme? I’m betting a lot of seasoned solvers won’t be enamored of this one, but for a Monday puzzle with a higher potential for newer solvers in the mix, I’d say it’s fine.

THIN MINTS and SLUSH PILE top the list of fill entries. REC ROOM gets honorable mention. Not much to scowl about except maybe a singular ANTIC. I could also do without the CSA in the grid.

Straightforward theme, suitable for a Monday. Solid fill all around. 3.5 stars. 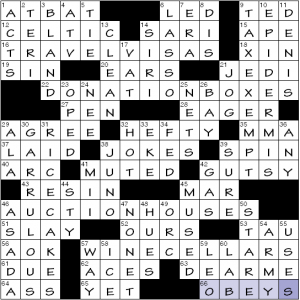 The gimmick here is words starting with the prefix FOR- parsed as two separate words, and clued appropriate to that.

I enjoyed this theme. It’s simple yet fresh, and executed elegantly. 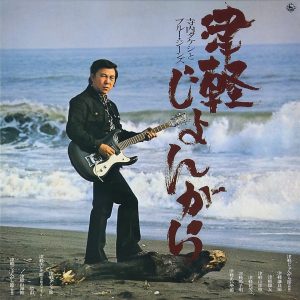 So just to give you a peek at my thought process, even though it isn’t a gerund like the theme clues, I thought of FOR|SAKE, which led me to the theme from High Noon (“Do Not Forsake Me”) and hoped to find a cover by Japanese musicians (sake, get it?). L+B, such a thing exists! Surf guitar virtuoso Takeshi Terauchi and His Blue Jeans covered it on their 1963 album Screen Mood on the Rock. Alas, I can’t find any version of it on the web to share.

As an alternative, I found “High Noon” from a Seattle-based band called JUNO (38d [2007 coming-of-age movie starring Elliot Page], but that turned out to be a cover of a completely different song, one by DJ Shadow (not to be confused with sometime surf-rock band the Shadows).

Let’s take a SPIN (39a) though the rest of the puzzle.

And now we’ve come to the end. What to do, what to do? I kind of like the meta aspect of a cover of Hayasaka’s theme music from Rashomon, so let’s go with that. 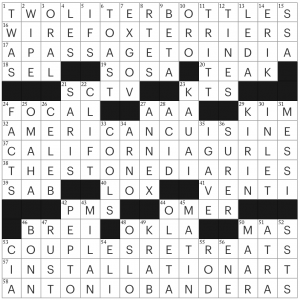 She’s done it again, folks! Elizabeth Gorski has published another triple-triple-stack in the New Yorker! I’ve been raving about the last time she did this every time someone asks me about my favorite puzzles I’ve solved lately, and here we have another gorgeous, jaw-dropping triple stack (using the exact same grid). Happy Monday to us!

The spanners (all NINE of them) are pretty solid:

Whew! The thing about puzzles like this is that there isn’t terribly much to say aside from “wow” — the construction is always awe-inspiring, the short fill often less-so (which is also the case today), but I very nearly can’t be convinced to care about the short stuff holding this together. I say nearly, but there is one area where I legitimately thought there must be an error in the clues or something else unfortunate going on, and that was the center of the bottom stack. The combination of OMER (OMER? I never heard of ‘er!), OLETA, and OKLA (for which I missed that “U.S.” apparently signals an abbreviation) left me totally confused, trying to make OKRA and GRETA work for OKLA/OLETA. I had to look up [“All the Love” singer Adams] and found the song to be not to my taste, but here’s the video anyways:

Anyways, all of that to say, I find this kind of construction super impressive and am willing to overlook a LOT of iffy fill when someone pulls it off (and by iffy, I mean words you only see in crosswords, not words that are offensive or otherwise problematic– no amount of stacking is worth alienating your solvers, imo) (which is not what happened in this puzzle! just noting that for constructors who might be considering lowering their standards in order to pull something like this off themselves).

Overall, tons of stars from me.

And while I have you here, I want to announce that the puzzle pack I have been editing for the benefit of the Baltimore Abortion Fund (BAF), “These Puzzles Fund Abortion,” will be coming out in the next week! You can pre-register to receive the puzzles by donating to BAF here. There will be a midi-puzzle sample from the pack, constructed by Chris Piuma, available this week, and I’ll update this post with the link to that puzzle when it’s available.