This week we’re told, The answer to this week’s contest crossword is a famous painter. There is one obvious themer:

I noted some movie references while solving the grid (tying to PICTURE), leading to these five additional themers: 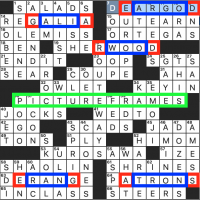 Each movie appears in the grid as a substring in the following entries:

I thought it was a nice breezy meta to kick off April. We’ll end with Pretty Ballerina by The Left Banke; the music is wonderfully synced to The Steadfast Tin Soldier (Сто́йкий оловя́нный солда́тик), a 1976 Soviet animated film based on the fairy tale by Hans Christian Andersen.