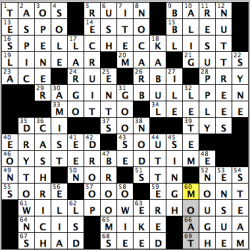 Hello there, everyone! Hope all is well with you in starting out the week.

We are getting a whole lot of play out of today’s puzzle, with the four theme entries combining two common phrases with a shared word into one long phrase. Furthermore, the last word in each of those entries is a word that can come after the word “play.” A number of people do not play around when solving puzzles, but you have no other choice with this grid!

Seeing DRY TOWNS immediately made me think of when I was searching for a new way to clue “dry” and ended up coming across the fact that about half of all the counties in the state of Arkansas are indeed dry (35D: [Spiritless cities?]). Definitely makes me wonder what would have happened if the state school, the University of Arkansas, had won their Elite Eight game against Baylor last week and gone to the Final Four. Or when the men’s basketball team won it all in 1994 with then-President Clinton, one of the most famous Arkansans, present at the game. How would the dry towns have celebrated? Yes, first-world problems, I know, but just wondering still!  I’m not sure if I’ve ever come across CASH RICH, other than just saying that I “have cash on me” when mentioning that scenario, which does not happen too many times with me (36D: [Having lots of spending money on hand]).

“Sports will make you smarter” moment of the day: GOOSE (31D: [Fla. team that won Super Bowl LV]) – The D-1 NCAA Tournaments have just wrapped up, and seeing the entry smack dab in the middle of the grid reminded me of one of the great NCAA Tournament players of all time, the University of Kentucky’s Jack “Goose” Givens. In the 1978 national title game, Givens scored a career-high 41 points as he led the Wildcats to their fifth NCAA title with a 94-88 victory over Duke in St. Louis. Goose was a three-time All-SEC First Team selection and, after his collegiate days, was drafted in the first round by the Atlanta Hawks and played two seasons with the franchise. 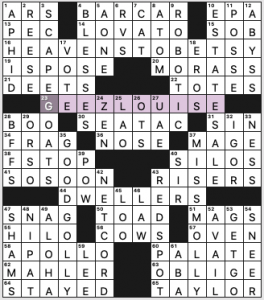 Oops, I forgot all about blogging till midnight arrived! Thank goodness Ade had the post up hours ago. So let me get this out quickly now.

Cute theme! Three colloquial (if a bit old-school) phrases that start with an interjection and end with a woman’s name get strikingly similar clues: 16a. [“Omigosh, girl!”] / 23a. [“Dang, girl!”] / 35d. [With 37-Down, “Wow, girl!”] for HEAVENS TO BETSY, GEEZ LOUISE, and GOOD GOLLY, MISS MOLLY. A tall and thin 14×16 grid and left/right symmetry accommodates the theme set.

More modern slang peppers the grid: DEETS for details, TOTES for totally, BFFS, a POSSE of friends who are your [Crew].

BASEBALL / DIAMONDS are today’s theme (25a, [With 49-Across, a hint to the circled letters]). Each grouping of circled letters is in the shape of a diamond and spells out one MLB team name. 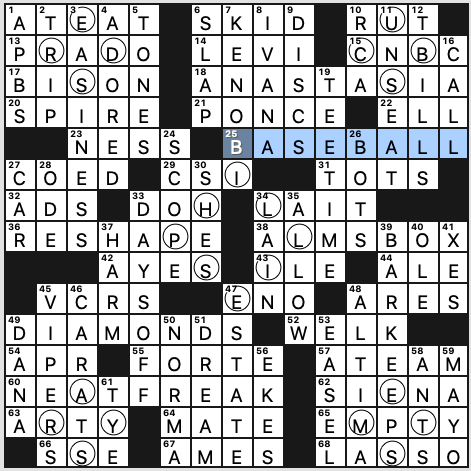 The teams are the REDS, CUBS, RAYS, and METS in the corners and the PHILLIES in the center.

That’s cute, yeah? It’s nice to have something different (a curveball, if you’ll allow it) every once in a while, and this works well enough.

It does mean that the puzzle can feel very much like a themeless, so one would hope for some nice, strong fill. ANASTASIA and NEAT FREAK top the list. EASINESS is on the bland side, but since it must start with E_S-, there aren’t a lot of options there. BARKEEPS [Tap tenders] in the other corner is nicer, but I feel like “barkeep” is more often used as a term of address and less a job title. TEE TIME and DAYS OFF round things out and make a nice pairing.

Baseball fans maybe got more out of this grid than I did; I found it to be solid enough, though. 3.5 stars. 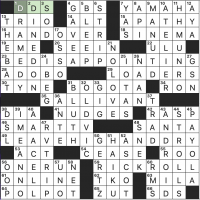 This phenomenon has been going on for a while now; this theme is a fresh take on an old annoyance!

You know this song is going to end up in this post, don’t you? Would you have it any other way? That way you can verify the lyrics of the theme, which I am too lazy to write here! Suffice it to say Matt skipped over “Never gonna make you cry”, unless that is lumped in with 49-Across! A funny puzzle this week! 4.5 stars.

Here is that earworm for you! 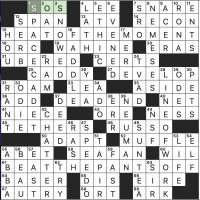 I misread the revealer at first; I had no idea what this theme was! I must need a vacation … the revealer is at 37-Across:

So we have dead heat, dead beat, etc. You get the drift. For some reason I thought we were dealing with the ends of the clues! Reading is hard.But this puzzle was fun! 4.3 stars from me.

Another “out-of-the-norm” puzzle from Universal! Sometimes I feel like these come in spurts. Probably just me.

THEME: The word ACT needs to be removed from themers in order for the clue to make sense. 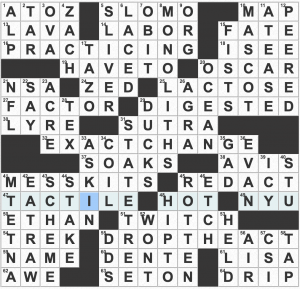 That’s a lot of themers! Interesting that this idea works for so many words/phrases. Nice finds all around… especially EXACT CHANGE. I realized something funky was going on and started ignoring clues for the themers and letting the downs do their thing. Then I jumped to the bottom and got the revealer. I was glad I uncovered that comparatively early on because it was enjoyable to know what was going on while figuring out the rest of the themers. Cute little AHA moments abound. In fact, I would’ve preferred the revealer in the title (similar to a recent Universal puzzle where I thought OVER AND OUT should’ve been the title).

I can see a puzzle like this may be frustrating to a brand new solver, but I like Universal’s approach to non-conventional themes. I think it’s important to run puzzles like this here and there. It keeps it fresh and fun.

Let’s see… anything else? I don’t remember stumbling in the fill or giving anything side-eye at all… I was solving in the web applet, which I find clunky, so that is usually a bigger target of frustration over anything in the fill. Looking it over, seems pretty standard. Nothing flashy (not that there can be with all that theme), and nothing to gripe about other than EAT RAW which… is that an in-language phrase?

Overall, impressive, quirky, and very fun to puzzle out.