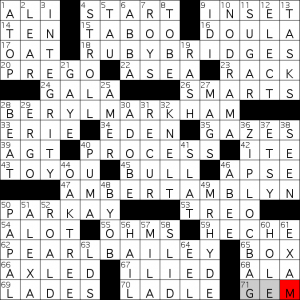 hello and welcome to episode #670 of matt gaffney’s weekly crossword contest, “Director’s Cut”. for this week 1 puzzle, i attempted and failed to solve it without the instructions. okay. what are the theme answers?

okay, so these are four women named after precious stones. i wasn’t familiar with BERYL MARKHAM, but the others were all people i’d heard of, if not necessarily people i knew a lot about. what about the meta answer, though? from the title, “cut” can certainly refer to gemstones, but “director’s” certainly made it seem like the meta answer was going to be a director. the clue for the last across answer, {Metaphor for an excellent movie (and a hint to this puzzle’s theme)} GEM, confirmed my suspicion. but is there a famous director whose first name is a precious stone? well… maybe. probably? i don’t know. i couldn’t think of one.

after a few days i finally caved and looked at the instructions: This week’s contest answer is one of the five people nominated for Best Director at the upcoming Academy Awards. okay. i knew chloé zhao was one, for nomadland, and lee isaac chung for minari. but neither of those is a gemstone, of course, and i didn’t know the others off the top of my head. so i googled it and found emerald fennell, nominated for promising young woman. and that’s the answer.

i’d heard of the film but not the director, so i was never going to be able to solve this without search assistance. for that reason, the final answer was a little bit anticlimactic for me. but this is definitely a failing on my part, not that of the puzzle; i just don’t pay all that much attention to movies. (i have seen none of the films nominated for this year’s oscars, despite the fact that this is the one year i could easily have watched them all even though i almost never go to movie theaters.) i think this must be the first time two women have been nominated for best director in the same year, though, and that’s noteworthy enough that i should probably have known about it. (interestingly, neither is american—zhao is chinese and fennell is english.)

so, certainly an easy enough puzzle for a week 1, in that it was pretty clear what to look for even if you weren’t familiar with the answer, and an interesting subject to spotlight. how’d you all like this one?