NIGHT / FALLS at different times around the globe, and this puzzle provided me the peaceful image of that occurrence as the earth spins, bringing night to each country in its turn.

The 3d revealer is clued [With 55-Down, what happens multilingually in the circles]. Each grouping of circled squares in the Down-directed theme entries is a translation of “night” hidden in a well-known phrase. 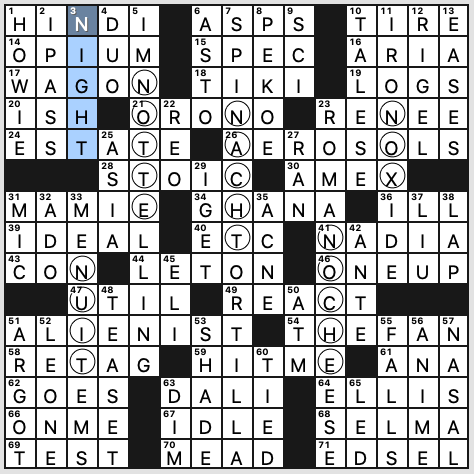 These are really nice finds. Each one of them spans two different words, and the ones that aren’t five letters in length have more challenging letters to work with (NOX and NUIT).

That said, there isn’t any rationale provided as to why we’re doing this in different languages. Obviously having NIGHT duplicated in multiple entries would be less interesting, even if it was possible to find it hidden in usable phrases, so I guess it makes sense to go the translation route. Still, I think it would have been beneficial to hint at the multi-nationality of the theme in the title.

The other thing is the Euro-centrality evident here. On the one hand, wouldn’t it be interesting to include an Asian or African language? But on the other hand, if I’m a typical English-only speaking solver, I know (or at least recognize) all of these translations; I don’t know “night” in Japanese (yoru) or Swahili (usiku), say. At least there are other international references in the fill: GHANA, the HINDI language, a TIKI torch, and Afghanistan in a clue.

Speaking of fill, I liked seeing The ALIENEST [Caleb Carr’s Dr. Laszlo Kreizler, e.g.], a book I enjoyed reading years ago. Its counterpart in the grid is AEROSOLS which is less exciting, and there isn’t much else that makes the highlight reel unless you’re a fan of THE FAN, the 1996 De Niro/Snipes film. There’s nothing much to scowl at, so that’s a good thing. 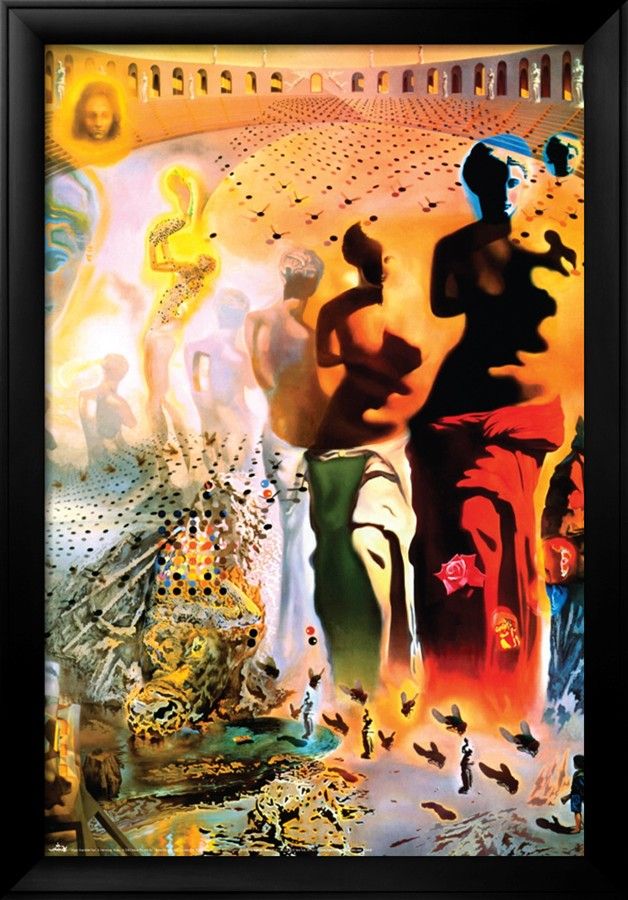 I liked this grid though I wish the title was used to hint at the multiple languages. 3.7 stars. 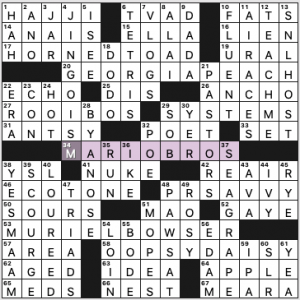 We’ve got a video game theme that’s entirely solvable even if you don’t know any of the characters from the game. The revealer is 34a. [Video game franchise with characters found at the ends of 17-, 20-, 53- and 58-Across], MARIO BROS.

Fave fill: ROOIBOS tea from South Africa, SCOURGE, LOU REED (hot take I read from someone the other day: He was a terrible singer and his biggest songs are lifted up by the women of color who were his backup vocalists), JINGOISM, SNL HOST, and beachy SEA GRAPE.([Native Caribbean plant whose fruit grows in clusters]).

Interesting fill overall, no? With answers like HAJJI, PR SAVVY, and JINGOISM, we’ve got things that don’t pop up in many crosswords. 3.75 stars from me. 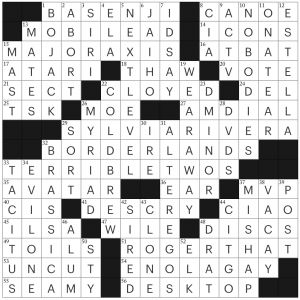 Hey, this was great! I love the grid design and the offset staircase in the middle, and a lot of the long entries are excellent. There were a couple tricky spots for me, including one that required a google, but for the most part I thought this was a solid Wednesday puzzle from the New Yorker.

The staircase today was SYLVIA RIVERA / BORDERLANDs / TERRIBLE TWOS, and although I couldn’t pull SYLVIA RIVERA right away, I did know BORDERLANDS and TERRIBLE TWOS, so the middle of this puzzle came together fairly quickly for me. Other long stuff today included NEXT LEVEL / ALTER EGOS / MAJOR AXIS / ROGER THAT / NOBODIES / BRASSICA. Most of these are excellent, and I particularly liked NEXT LEVEL and ALTER EGOS, but BRASSICA is a bit of a stretch. I generally stay away from genus entries, personally, but it’s hard to resist a word with that consonant/vowel pattern and two S’s!

The spot where I got stopped cold today was the BASENJI / ELA crossing. I’ve never heard of BASENJI, so the E could just as easily have been any other vowel (the lyrics of “The Girl from Ipanema” are also not stored anywhere in my brain). I definitely googled to see what noise BASENJI make and I was not disappointed.

Overall, I really enjoyed this puzzle! There were a few tweaks I’d have made, personally, especially at that BASENJI/ELA crossing, but in general I thought this was an excellent Wednesday puzzle.

PS. The pack I edited for the Baltimore Abortion Fund is still available for preorder here and will be available to solve this weekend! Preordering guarantees that you will get the puzzles first, so if you are thinking of contributing for this important cause, I’d encourage you to do so now! 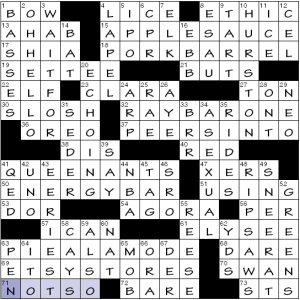 It’s possible I’m missing something here, in which case I’d be willing to reconsider my assessment.

It isn’t too unusual to see theme answers that pass through or ‘behind’ black squares to make sense. Similarly, we’ve had our fair share of those that ‘leap’ over letters or simply shift up one row.

I don’t recall encountering one that asks the solver to look below a grid element, but that’s what’s going on here.

So this is a limbo BAR being progressively lowered. First one row down, then two, then three. But in limbo, one has to pass beneath the bar, so this seems off. Also, the clues are asterisked, which makes me wonder if I’ve missed an explanatory revealer somewhere …

However, there is no revealer, no explanation, nothing in the notepad. Odd. Still, my estimation of the theme and construction has gone up.

Not much else I found to glean from the rest of the grid. It’s solid but not exceptional, considering there’s quite a bit of theme to work around.

Seeking to avoid an obvious (and perhaps trite) limbo musical selection, I searched for lower and bar, came up with this: 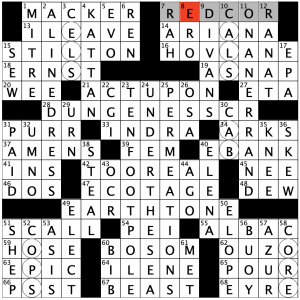 Today’s AVCX is from Lindsey Hobbs and Ross Trudeau.  If some of the clues seemed fishy, you weren’t wrong:

There are five answers that can be found under the sea, and each of them has a C in their name.  They’re all too short for the space allotted for them in the grid, but each finishes under its C while also spelling out another word.  For example:

continuing MACKER with the letters after the C in CELS, you get the full answer for 1A, MACKERELS.  This pattern continues with the other four answers:

One other note: I loved the left-right symmetry of this grid and the longer entries it allowed: A-LINE DRESS, ON AN ERRAND, TEN FOOT POLE, PERMEATIONS, and the revealer. 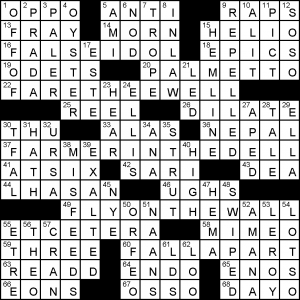 Today’s theme has a basic concept: FALLAPART means the ends spell out FALL. This introduces a lot of F’s into the mix, which seems to have led to some filling issues. The entries themselves are above average in quality: FALSEIDOl, FARETHEEWELL (my rambling boy), FARMERINTHEDELL and FLYONTHEWALL.

I’m not sure if OPPO is a deliberate choice, but with OFFOF it’s a very stilted opening. There are a lot of really ugly “fillbits”, particularly where two themers run in parallel: HEMA, plural UGHS, ETRE, ESTE, not-a-real prefix CRAN. I think the goal would be for one or two of those per puzzle? Perhaps one themer less would have made a better overall puzzle, even though I can see it being difficult to let one go. 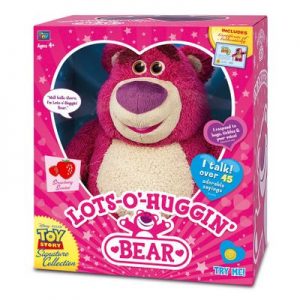 New to me: LOTSO, a bear in Toy Story 3. Seems like something worth noting as he will turn up again. I’ve looked him up and I’ve definitely seen him as a reference before, just not seen the movie so didn’t know the name.