There’s a new fundraiser crossword bundle in the works! Team Fiend’s Rachel Fabi spearheaded the project to benefit the Baltimore Abortion Fund, and the puzzle pack will be emailed out in the coming week. Visit the fundraising site, make a donation (suggested amount is $20), and enjoy the crosswords! The themes cover reproductive rights and Baltimore, and there are themelesses, too. The roster of constructors includes Brooke Husic, Chris Piuma, Claire Rimkus, Erica Wojcik, Erik Agard, Finn Vigeland, Juliana Tringali Golden, Martha Kimes, Matthew Stock, Natan Last, Nate Cardin, Rebecca Goldstein, and Robyn Weintraub, along with project editor/constructor Rachel Fabi. Disclosure: I was on the editorial team … so I’ve done all the puzzles and know firsthand that you are in for a treat!—Amy

I had no idea what was going on with this theme. I stared at it for a while. I have appointments and projects and things to do, so after about 15 minutes I looked at Peter’s solution. I’ll just give you his explanation: 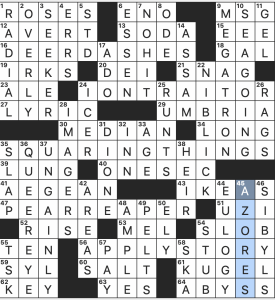 Um, OK. I was not anywhere near Paul’s wavelength. I feel like I had my old AM transistor radio (it was red! I loved it) and Paul was broadcasting on a Star Trek subspace channel. Now that I know, I’m not entertained or amused. That doesn’t mean it’s a bad puzzle. I finished it without difficulty, so the crossings are fair, and the fill is solid. It means it’s not to my taste. I’m sure some of you loved it. Let us know in comments!

What I didn’t know before I did this puzzle: that MEGATRON is the arch-enemy of Optimus Prime, and that Terceira is part of the AZORES.

Baseball’s in the air as evidenced by another baseball-themed grid today.

This time we’re given phrases that sound vaguely familiar but clearly aren’t in-the-language phrases. It took me a little while to piece together that these are spoonerisms, and all of them are related to baseball. Now, it’s not easy to find decent spoonerisms and to find ones all related to the same topic is a minor feat (at least in my eyes). 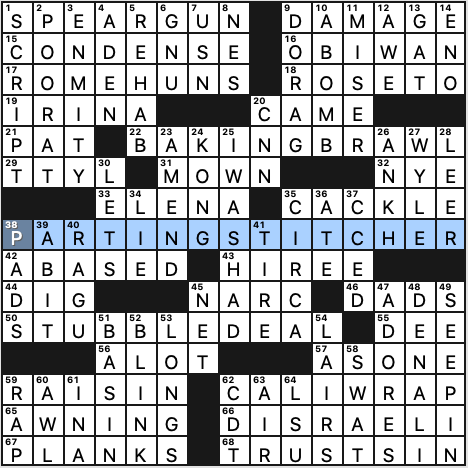 I’m not going to say I loved all of these or that they even made me laugh, but as spoonerisms go, they work well enough, and as I said, I’m impressed a full set could be found centered around one topic. Nicely done.

The best of the long fill consists of the leading SPEAR GUN and the old-timey “I WAS HAD“. CACKLE is a fun word we don’t see often in crosswords, and it’s nice to see DENALI again.

Despite some downers in the clues, I liked the spoonerisms in the theme and the grid as a whole. 3.9 stars. 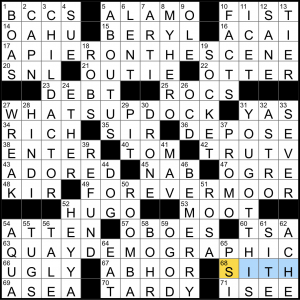 Other fill of note: young OTTERs and DOGs are pups, CHILD ACTOR Tatum O’Neal won her Oscar AT TEN (age ten?  10pm?  both?  you decide!), YOU GOT THIS, BE MERRY, and ROOMBA

Of course that title is a synonym for KEEP AN EYE OUT, which is a forehead slapping revealer if I ever saw one. So obvious and perfect for a simple crossword theme! How come I never thought of it?

THEME: The letter “I” is omitted from common phrases, causing extreme i-less wackiness. 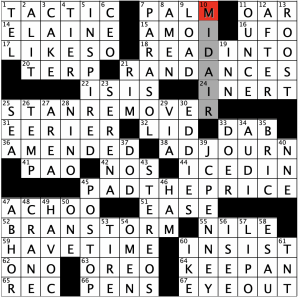 As far as letter removal puzzles go, this one is just fine. I don’t think I’ll find the theme answers particularly memorable (except for that revealer of course). The only one I got a half chuckle out of was BRAN STORM, which is an enjoyable visual. Of course, I shouldn’t be the judge of at least one of the theme answers as I had no idea that STAN was slang for an “overzealous fan.” I was actually somewhat stunned when Mr. Happy Pencil showed up and told me I had filled everything in correctly. Sure enough… it looks like it’s attributed to Eminem.

I should mention that there is another I in PAD THE PRICE. While it may be way too big of an ask for there to be no “I’s” at all in the grid (it would also likely result in horrible fill), I think it would be more elegant if there were only one “I” in the base phrases.

Fill was a little south of Universal standard imo. BRIC, PAO, AMOI, TEL, NOS (clued with Russian?), ESAU, ISIS. The longer entries didn’t do much to add to the excitement (INSPIRED, HAVE TIME (?),  JC PENNEY)

Anyway, I don’t mean for the gripes to overshadow that the puzzle wasn’t all that bad. Just didn’t land all that solidly for me. 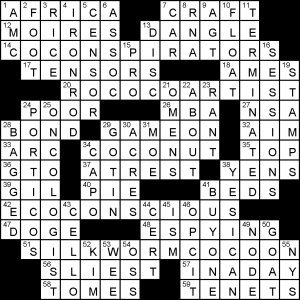 Due in part to the segmented nature of the grid design, I went right around the puzzle to the bottom without encountering the middle. Because of that, I was convinced the [Source of an organic fiber] was going to be something to do with COCONUTs. As it happens, that was to be found in the centre, but I had sussed out the theme, slight as it is. Four words here contain COCO because the constructor is a “COCO” nut?

Today, the segmented grid design does a good job of mitigating the effects of the difficult theme entry letter counts: 14/12/7/12/14.

ONCOLOGISTs and their trade are typically taboo subjects in puzzles. I’m not sure [Physician wearing a pink ribbon, perhaps] is a very well pinned clue, possibly tiptoeing around the definition? [How to receive a freebie, perhaps] for BUYONE is also kind of odd as a clue. I get it is referring to BOGOT though.