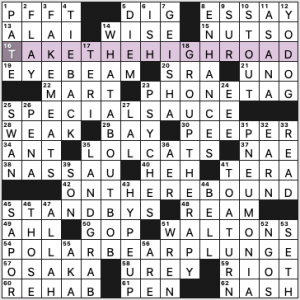 Moving right along to the list, as I’m not feeling that paragraph vibe tonight: 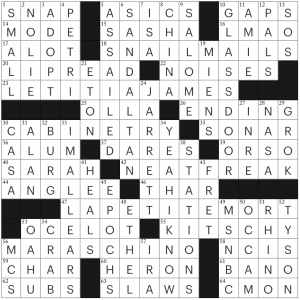 Man I love a Wyna puzzle. The long stuff is great, the clues are  fun and clever yet totally accessible, and as far as I can tell this is the first time the word “orgasm” has appeared anywhere NEAR a mainstream publication. I also tore through it in near-record time, so I had to appreciate the clues retroactively.

Long entries today: LETITIA JAMES / LA PETITE MORT / SNAIL MAILS / MARASCHINO / IM ALL EARS / GLASS DOOR / CABINETRY / NEAT FREAK. With possibly the exception of CABINETRY (?) these are all bangers. My favorites are probably SNAIL MAILS (I love a good retronym) and my own state’s fearless AG LETITIA JAMES. People unfamiliar with her may have struggled with the Valerie JARRETT crossing, but imo both of these women are pretty high profile and the letter of intersection is definitely inferable. 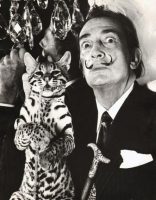 Overall, tons of stars from me. Loved this puzzle from start to very quick end, and love it more after getting to spend some time with it for this writeup!

P.S. These Puzzles Fund Abortion will be released **tomorrow** so be sure to donate here if you have not already! The pack features 3 New Yorker constructors (Robyn Weintraub, Natan Last, and Erik Agard), as well as 11 other constructors you’ll recognize, and if I do say so myself, it’s pretty excellent.

But this one is FRIDAY-focused (12d, [When you’re likely solving this puzzle, and a phonetic hint to the starred answers’ starts]). Of course, I solved this on Thursday, but be that as it may, let’s look at those starred answers. 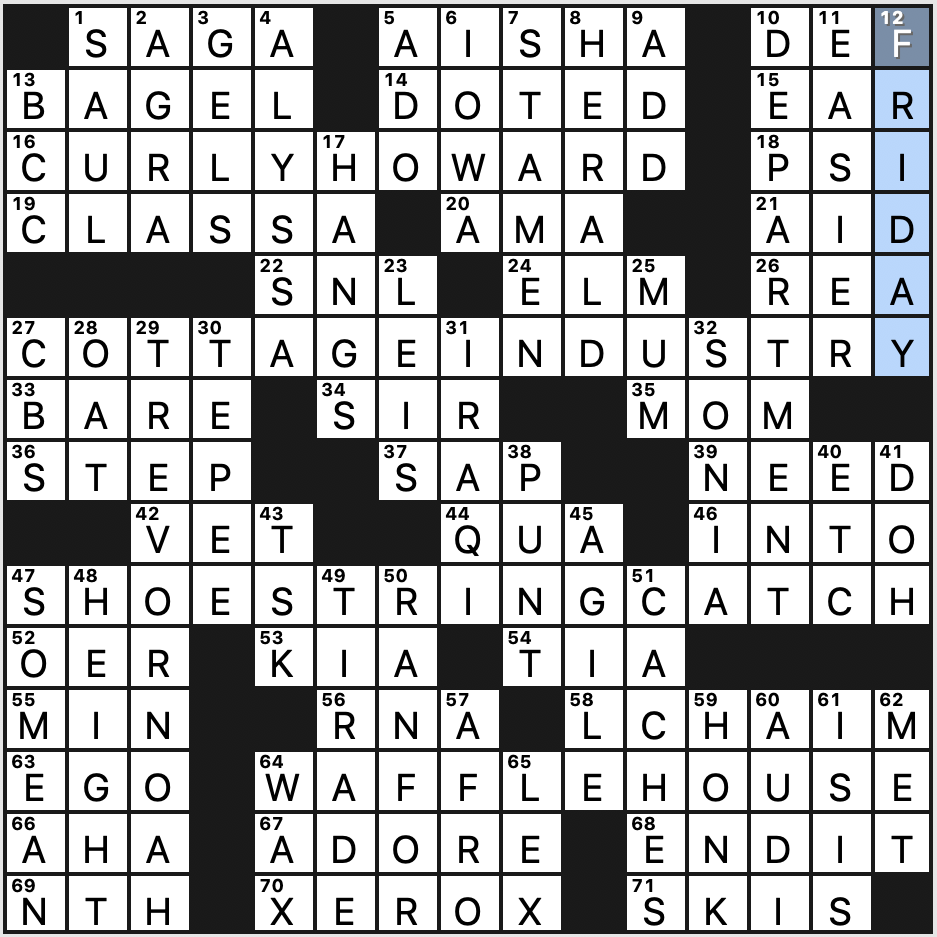 What do they have in common? Each phrase starts with a word that can precede “fries.” Get it? FRIDAY / “fry day”? We have curly fries, cottage fries, shoestring fries, and waffle fries. I admit to not hearing “cottage fries” very often (if at all). Maybe it’s a regional thing.

What I still haven’t figured out is the title of the puzzle? What does “Left Side”…oh, wait. Fries are usually a side order, and these are on the “left” of each theme answer. That must be it.

Top fill: Easily, it’s TREVOR NOAH [“Born a Crime” memoirist]. I can’t recommend this book enough. And even better than the book itself is the audiobook read by the author. It’s humorous, interesting, and dare I say, important, and to hear it all with the author’s pronunciations and accents and timing is just superb. It’s laugh-out-loud funny and thought-provoking as well.

Nothing else stands out in the fill, but nothing rankles, either. SO MEAN is on the roll-your-own side, but the crossings are fair enough.

MOM hidden in the Wendy’s logo

One clue of note: 35a. [Word hidden in the Wendy’s logo]. MOM. Neat bit of trivia. I was fixated on MOO, it being a burger joint and all, and that made seeing the crossing DEPARTMENT really hard. Looking at the picture, I guess you can argue that’s MOM. I think I’d like it better with MOO in it. 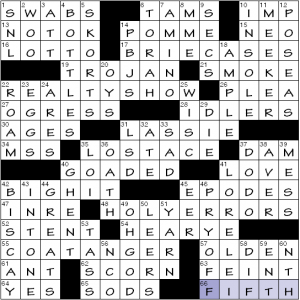 So it’s quite evident that the letters dropped (“taken”) from the original, non-wacky, versions of the phrases spell F-I-F-T-H, but I’m failing to see how—oh wait, it’s the fifth letter each time, isn’t it? Why yes, yes it is. That all builds a substantially tight theme. Well done.

The title is not seasonal. Each theme answer contains a JACK in a box – a rebus. 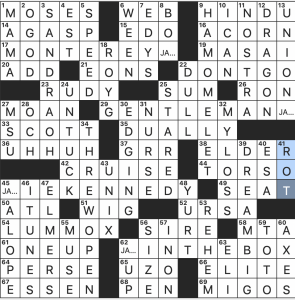 I figured it out with the first set of theme answers in the NW. I still enjoyed it. All the theme answers are solid and the rebus was fun.

It’s not that late but I’m very tired, so I’ll leave it here. What I didn’t know before I did this puzzle: that SANDRA OH plays Eve in “Killing Eve.”