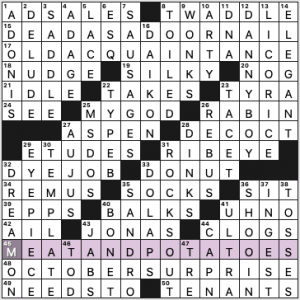 What did I like most in this puzzle? TWADDLE, MEAT AND POTATOES, OCTOBER SURPRISE (still so surprised that the October 2016 surprise of “I just grab them by the p*ssy” had basically no effect), DO LAPS, ROCKS OUT, and “DANNY BOY.” If you haven’t heard the Village People’s Glenn Hughes sing that tune, have a look at the movie clip below. Not sure if OLD ACQUAINTANCE fully rises to the level of “established phrase that works as a crossword entry.” 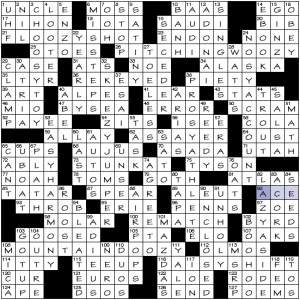 For this theme, two-word phrases have been wackified by suffixing the first word with a Z /ˈzē / sound.

Unusual arrangement of theme entries – eight are linked, two a side, and these form a loose ring around the grid.  Then two additional downs closer to the center area. As for the content, I thought they were all passable but not really exciting. 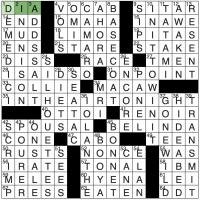 My friend Stella has today’s LAT challenge puzzle. I LOVE Stella’s puzzles! I don’t always get to do all of hers, but her site has excellent puzzles. She also has a lively Twitter feed, especially if you enjoy cryptic crosswords. She is @stellaphone on Twitter; follow her!

This was a smooth solve for me, but lots of interesting in the grid, which for me is the hallmark of a Stella puzzle. They’re never boring! 4.5 stars from me.

I am off to do more puzzle! Here is a song to get stuck in your head. Pay attention to that drum solo! 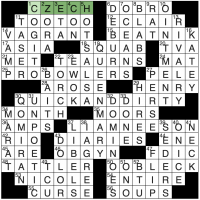 This felt like an old Stumper! I had all kinds of issues with this one. The upper third was a killer. Usually the puzzles by Anna Stiga (“Stan again!”) are not too thorny. Is it just me, or did this one fight back more than normal, especially since they are supposed to not fight back as hard anymore? Curious to see your thoughts. Maybe I just need a nap, which I will try to address later today! But a solid puzzle nonetheless: 4.7 stars from me.

Peep that title for the revealer :)

THEME: Common phrases that start/end with the letters in FOLD. 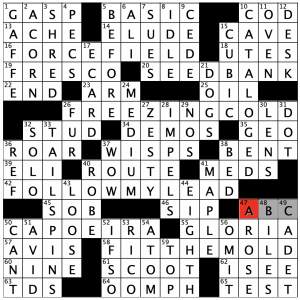 Evan Kalish is one of my favorite constructors to surface in the past few years. His grids are painstakingly clean and always freshly clued. Colorful fill abounds. And usually the theme is quite clever. Themewise, this one is over-the-plate and a bit more “run of the mill” than what I’ve come to expect of his work, but that’s fine. It works, and all of the other Kalish qualities are intact.

I forgot whether it was Simone BILES or Simone MILES and since both ABC and AMC are networks, that turned into a Natick for me (due to my own ignorance… not the puzzle’s fault). I guessed wrong first. Mr. Happy Pencil didn’t come to the party. Then I got it right, and he was fashionably late.

Never heard of CAPOEIRA, but it’s awesome! Wow. Check this out:

It’s symmetrical partner, SEED BANK, was new for me too.

Plenty to appreciate in this puzzle even if the theme was a tad on the “meh” side.