As the title implies, we’re adding L’s to words. But it’s not done willy-nilly. The L’s always come after starting S’s. 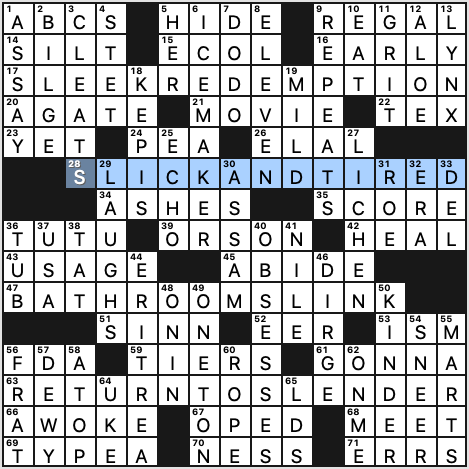 These work, yeah? Good choices and a dash of humor make for an entertaining theme.

Fill-wise, ICE MAKER tops the list followed by LICHEN, LAUGHS, and ERITREA. Could there be a more crossword-friendly country name than ERITREA? (Okay, maybe IRAN and LAOS, but only because they’re shorter.) 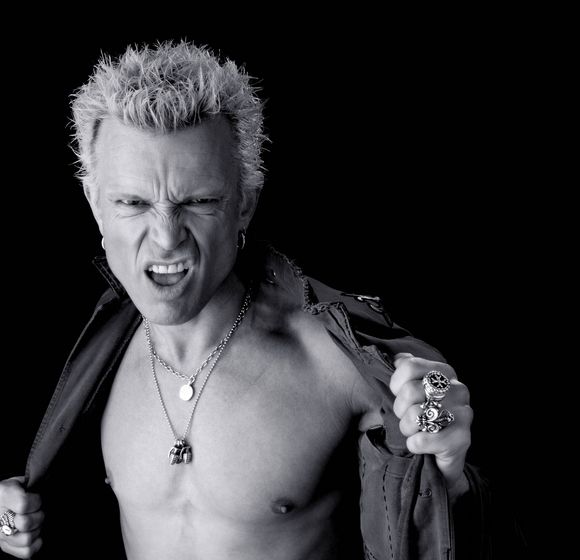 An older Billy Idol, still SNEERing after all these years 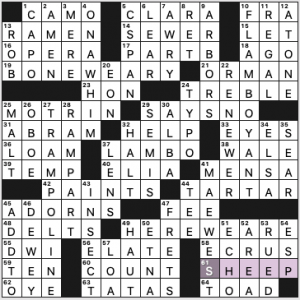 Tonight’s theme is COUNT / SHEEP, 60a. [With 61-Across, advice for an insomniac … or what you can do 12 times in this puzzle, reading across and down (not including this answer)]. The rest of the puzzle feels unthemed, but there are EWEs in 14a SEWER, 19a BONE-WEARY, 49a HERE WE ARE, 46d DEWEY, 41d MAE WEST, and roll-your-own word RENEWER at 22d. The RAM hangs out in 13a RAMEN, 31a ABRAM, 27d TRAMPOLINE, and 28d RAMPART. And the LAMBs have been herded into 37a LAMBO(rghini) and 10d FLAMBOYANT.

It might actually be lambing season (a Facebook friend’s ewe gave birth to a lamb last week), but somehow these five cruciverbal EWEs and five RAMs have only managed to produce two LAMBs.

This puzzle played like a Monday or Tuesday to me, a quicker solve than I was expecting. There are plenty of less-obvious bits, though, like FRA, ELIA, singer WALE, DWI (it’s called a DUI in many places), and Spanish OYE. The plural TA-TAS and ECRUS weren’t great, but they’re gettable enough. 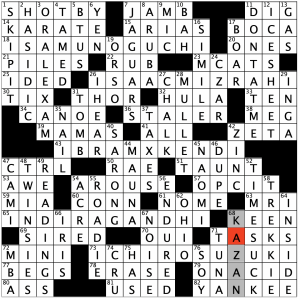 The I’s have it in this one – each theme entry is a person’s name that starts and ends with I.  There’s a nice range of people selected, with artists, politicians, and athletes all represented.

All of Jon Bois’ series on the history of the Seattle Mariners is great, but this bit does a great job of capturing the ICHIRO SUZUKI era of their existence. 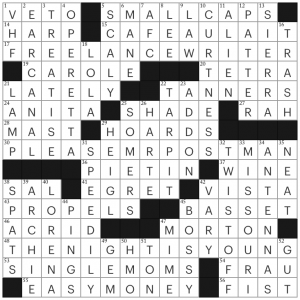 Helloooo team! We’ve got a grid with a  neat design and fun wordplay in the clues from Patrick Berry today, and the long stuff is pretty sparkly. I love the spanners FREELANCE WRITER and THE NIGHT IS YOUNG (which I initially threw in as “YOU’RE STILL YOUNG” after getting the end of the phrase from the crosses). Berry’s entry is much better! The central spanner, PLEASE MR. POSTMAN, was inferable enough, although I admit I don’t know the song (*ducks the objects hurled at me by enraged readers*). We also have other long entries of SMALL CAPS / CAFE AU LAIT / SINGLE MOMS / EASY MONEY / EAR CANAL / TREATISE / OPERETTA / TWIST-OFF / MISSOURI / ANTENNAS. Great!

I also like the design of this grid a lot—the spanners cut through some excellent stacks, and the middle section, though pretty isolated, is still an impressive little stack of 5s and 6s. And it looks cool!

[One standing in the living room, perhaps]

Overall, tons of stars from me. If the worst thing in your puzzle is VHF, I’d say that’s a pretty good puzzle!

PS. “These Puzzles Fund Abortion” is still available here if you haven’t picked up your pack yet! 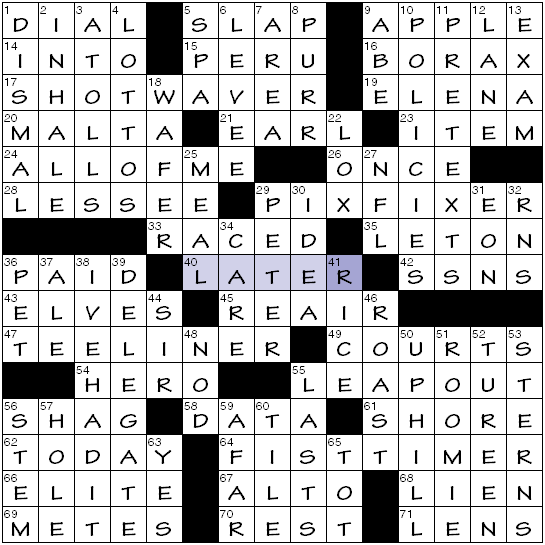 Pressed for time today, so let’s take a quick spin around the rest of the grid: 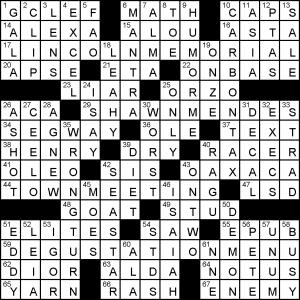 This is an example of a basic theme concept, but with some really top notch execution. The revealer, ENEMY, is quirky; we need to find a hidden “NME” – across two parts of the answer. The choice of entries was varied and interesting: I didn’t know DEGUSTATIONMENU, but it’s possibly my favourite. It seems to be a posh sort of tasting menu. TOWNMEETING is probably the most prosaic of the four, and the others are the geographical LINCOLNMEMORIAL and pop star SHAWN “I thought he had a U” MENDES.

Other interesting choices in the answers include ALEXA (who may become a crossword cliche in very quick time), SEGWAY, OAXACA, and EPUB. In particular, if you’re going to use an X, a move like CARBONTAX/OAXACA is the way to go!