It’s Tax Day! Or at least it is in an alternate non-COVID universe. Here in our universe we still have another month to go.

Regardless, we have a a Tax Day theme with H AND R BLOCK (63a, [Tax giant, as well as a hint to four squares in this puzzle] as the revealer. Four squares in the grid have the letters HR squished together, rebus-style. 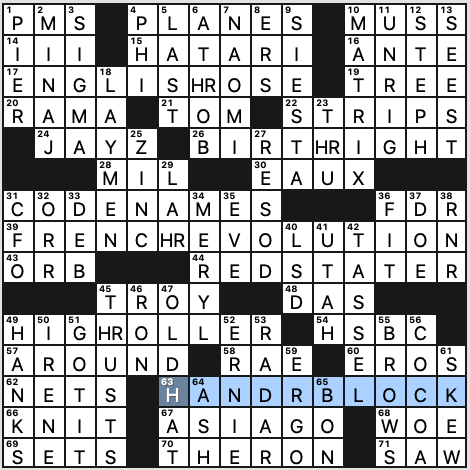 It’s nice to see a rebus in the WSJ; we don’t get too many of those, so it definitely comes as a surprise.

I like this one fine as rebuses go, but a couple things: The company is actually H&R Block with the ampersand, so that’s one nit. The other nit is: ATHROB.

In the fill, you hope that the 1a entry is a lively one, or at least a regular word. A few days ago it was AWS. Today, PMS. However you clue it (in this case [Brit. bigwigs]), it’s still an awkward abbreviation and doesn’t set a good tone for the grid. Right below it is III, clued [George opposed by Washington], which doesn’t sit well with me, either. I mean, who refers to a monarch by their Roman numeral (the following video notwithstanding)?

I did appreciate the correct pluralization of the French “water” as EAUX instead of EAUS. I also liked the CODE NAMES entry and especially its clue [Celtic and Capri, for Joe and Jill Biden]. The Bidens’ names are holdovers from their vice presidential days.. Kamala Harris is “Pioneer” though I couldn’t find her husband’s name in a quick search.

I mis-typed “beating” in the Google ngram viewer, and it still crushes ATHROB. 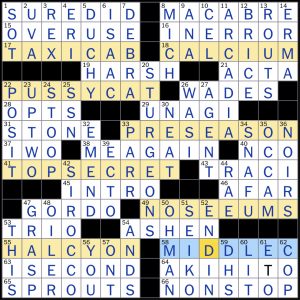 Today’s NYT is from BEQ and Ben Zimmer, and in the words of BEQ, I know these guys!  They’re okay.  Let’s see what BEQ and Ben have cooked up for this puzzle

“Phonetic” does a lot of the heavy lifting in the revealer – mentally walk your way through each of the theme entries and you’ll find the middle sound in each is a “C”, whether it’s the XI in TAXICAB or the SY in PUSSYCAT.  I honestly thought something was going on with the entries because I did not believe a NOSEEUM was a thing.  A quick google search proved otherwise.

Other fill of note: SURE DID, MACABRE, ME AGAIN, SPROUTS (which can go on any burger, not just a vegan one), DUCHY (as in the Grand Duchy of Luxembourg), and STURGEONS, which I learned were once nicknamed “Albany beef”.

A swell puzzle. In more ways than one. This also appears to be a debut puzzle, so congratulations, Kimberly!

THEME: Phrases that start with a synonym for the word “Swell”… or things that swell… something like that. 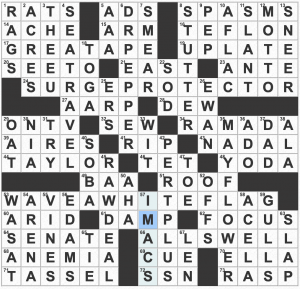 I found this very odd in a number of ways. First, building a theme off of the word SWELL just makes me cock my head a bit with a half-smile. One of those “Really? Sure! Why not?” expressions. Then, I’m not entirely sure whether the theme is asking us to accept the words at the beginning as synonyms or not. I mean, GREAT is a synonym for SWELL. Like “That’s GREAT!” = “That’s SWELL!” But is it a synonym for WAVE? I’m honestly not sure. I thought ocean WAVEs SWELL in a verb sense. And the revealer seems to suggest SWELL as a verb. Then there’s the fact that WAVE in the context of the entry has nothing to do with ocean WAVEs or sound WAVEs at all. And does SURGE mean SWELL? There seems to be a distinct difference, that is if this Wikidiff (?!) website is to be trusted at all.

So yeah… weirdness abounds in the theme. The more I think about it, the stranger it gets. I think it’s best if you don’t overthink it. Or perhaps ignore it altogether.

Some cool things to learn in the fill today! For me:

Then there’s some rougher stuff:

An off-beat puzzle for sure today. While it wasn’t quite for me, I look forward to more from Kimberly Dunn. Thanks! 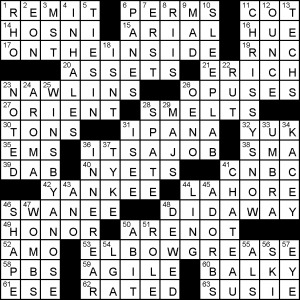 ITSAJOB is an excellent revealer, but is only employed to lead us to phrases with “___ JOB” words. I’m not convinced “grease job” is an at all common way of referring to a lube job. The other three jobs are: inside, nose and snow. Apart from several more edgy entries, the most obvious exclusions were DAY and DESK, which were probably deemed too bland?

This puzzle’s conservative pinwheel design, with two across and two down themers, is mostly seen earlier in the week. It leads to a fairly easy to solve puzzle. Despite the design, there are some endangered entries on display: SMA, IPANA, OENO and DEWED with ADORBS freshness in stark contrast.