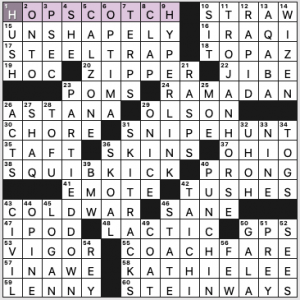 There was only one this in this puzzle that was unknown to me till learning it just now: 38a. [Football tactic to prevent a long return], SQUIB KICK. I read the clue to my sports-fan spouse and he nailed the answer right away. Those of you who know sports terminology but not names from pop culture: I knew all the names of people and places in this puzzle. That B crossing was a little tricky, too: 39d. [Mini production company], BMW refers to the Mini Cooper line of cars that BMW sells, but that veiled capital M might have you thinking about small film/TV production companies and having no idea what letter goes at the start.

SHAQ O’Neal ([The Big Aristotle of the N.B.A.]) is in the puzzle, so here’s a clip from Shaqtin’ a Fool:

I’m popping in from vacation to write about this delightful themeless. Even though I didn’t find it as challenging as the email suggested, I really enjoyed it. Fun! 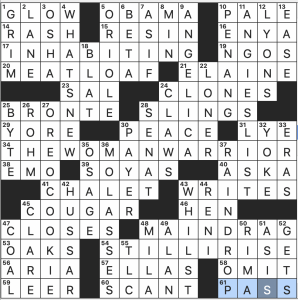 What I didn’t know before I did this puzzle: that a COUGAR is also called a catamount. How did I not know that? 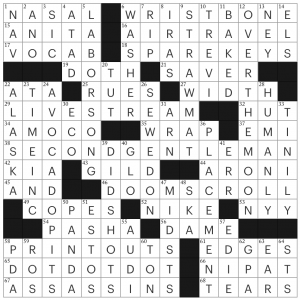 Overall, plenty of stars for this one. Have a good weekend, folks! 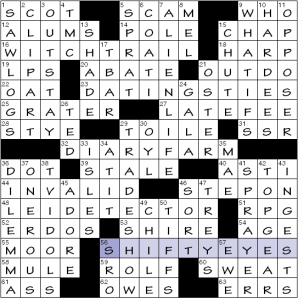 What’s going on is that the letter i is shifting its location by one spot in each wackified phrase.

I was going to complain that this isn’t really a phonetical relocation and more of a typographical one, but then I realized that the “phonetic hint” of the revealer is simply indicating that eyes should be read as [the plural of the letter i]—a step that I, veteran puzzler that I am, had already done without consideration.

Decent but kind of forgettable crossword. Maybe I’m just sliding into the weekend.

One of our collaborators is making their debut with this puzzle. Congrats to Lana on the occasion!

Theme: Certain words that end -CKS have those letters replaced with an X resulting in an entirely different word and, of course, crossword wackiness. 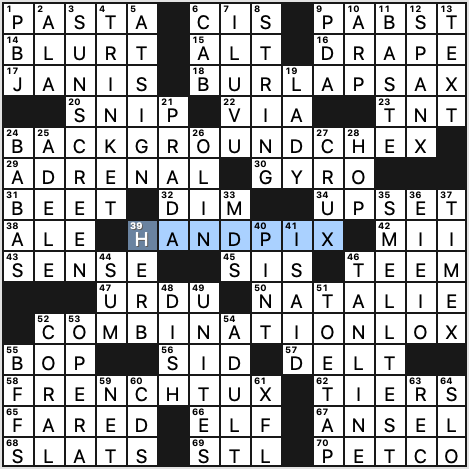 Solid theme, and I like how most of the X’s are handled in the crossings with SPANX, CRUX, and TIMEX. Only XFL is on the meh side.