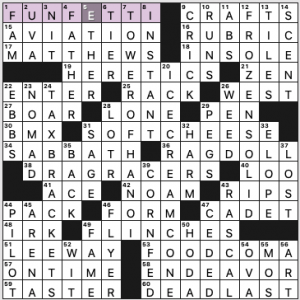 The virtual ACPT is next weekend, but the Boswords Spring Themeless League has been in full swing since the start of March. And I’m glad I’m competing in that, because gnarly themelesses that put me through my paces are what I love. Of course, I still have affection for easier freestyle puzzles like this one (which fell faster than Friday’s NYT, for me)—and this one was made a bit easier by that splashy 1-Across, FUNFETTI (clued as [Colorful Pillsbury cake with a portmanteau name]), having appeared in one of the Boswords grids! And yes, I really struggled with it the first time around.

In addition to that sparkly color at 1a, I also liked seeing FLINCHES, FOOD COMA, DEAD LAST appearing dead last in the grid, TAX BRACKETS, TOWER OF HANOI, FAM, ICE CREAM CONE (coincidentally, the subject of the jigsaw puzzle I just started this evening), and I’m-so-glad-it’s-spring FROZEN SOLID. 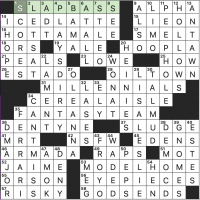 I found this a little tougher than normal, so maybe I am tired. Or the puzzle is just harder! Or maybe I need a nap! It is a little cool here where I live, and I hope to curl up on the couch later today, but we will see if that actually happens. There is a beautiful stack in the middle of this grid that hits a lot of comfort spots for me (see below!), but this fought back just a little. I am not necessarily in race mode when I time these, which could also be the issue with the slightly slower time, but I am also not solving casually. Does that even make sense? I must be tired. Great puzzle, Joe! 4.5 stars from me.

I am off to prep for that nap! 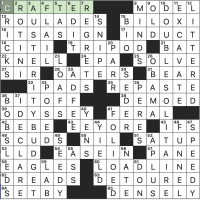 This is two weeks in a row that the “Stumper” had teeth! Once again the upper corners of the puzzle is where I found the most trouble. I suppose under the old “Stumper” clueing this puzzle would have taken me a full 30 minutes or so, but after solving most of the newer Stumpers in under 10 minutes, this one and the previous one have literally left me “stumped” for nearly 20 minutes. If they are in fact slightly tougher, that is fine with me! I like having a bit of a battle. I am not sure what is different with me, if anything; am I too tired? Was I too distracted? Those are also possible. As I have stated before, the quietude of solving is the allure for me. Just being able to concentrate for a few minutes is a form of therapy, and that is what I love about all puzzles, including crosswords, sudoku, even jigsaw puzzles. Brad, keep these awesome puzzles coming! 4.6 stars from me today. 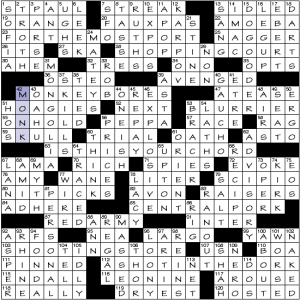 Not wowed by the theme, but all the answers are cogent, and the layout has what I consider to be a Shenkian trademark—significant overlap of long theme answers. In this puzzle, the first and final pairs stack for 6 letters apiece.

However, where I think this crossword shines is in the ballast fill and cluing. Pretty much throughout, I was encountering clues that brought a smile to my face.

I didn’t highlight each and every pleasing clue/answer—in fact, some of these are included for  other reasons—so I just want to reiterate that it was the general vibe while solving.

THEME: Two word phrases where each words starts with B are suddenly B-less. And wackiness is upon us. 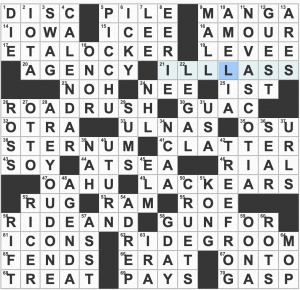 A good ol’ fashioned letter removal puzzle with a dead giveaway in the title. I convinced myself that BETA LOCKER was a thing and thought, initially, that only one B was being removed (as the title sorta suggests). The next themer I uncovered was LACK EARS, so when BLACK EARS (?!?!) didn’t strike me as an in-language phrase, I figured out my misstep.

Biggest mistake for me was forgetting that ROAD RUSH was in a theme spot. I entered ROAD RAGE, which makes sense with the clue I think. So that led to a hot mess, especially with how confident I was in the answer.