Sid Sivakumar has a new crossword gig. There’s an online publication called the Juggernaut, “smart media for the South Asian diaspora.” Follow this link, key in your email address (you’ll be added to their mailing list, but can unsubscribe if it’s not your vibe), and try Sid’s South Asia–friendly crossword. Sid will be taking puzzle submissions from other constructors, and he’ll be the Juggernaut’s crossword editor. I solved this April 2021 puzzle in a Fri/Sat NYT amount of time despite not knowing a great many of the Indian etc. fill. That’s the mark of a well-made puzzle, if someone who just plain doesn’t know a bunch of things can still manage to finish it! Enjoy. 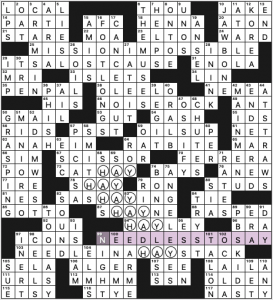 Today’s constructor is a Swede making his American crossword debut, though he’s been making Swedish puzzles forever. It’s a nifty theme, centered on NEEDLE IN A HAYSTACK, 103a. [Item hidden somewhere in this puzzle (where is it?)]. This rectangular grid (20×22) also includes these thematic pieces:

There’s room in the grid for plenty of longer, colorful entries in the fill. To wit: MINI OREO, ADAM WEST, Subway FOOT-LONGS, CANCEL OUT, THE MUSES, ANGEL EYES, JAWBONE, PBS KIDS. And “MM-HMM.”

There were a few clunky bits in the puzzle: GOT TO, ON TOE, the alarming RAT BITE. Overall, though, a smooth grid. Four stars from me.

You don’t have to solve this puzzle alone, but you should do it without company. 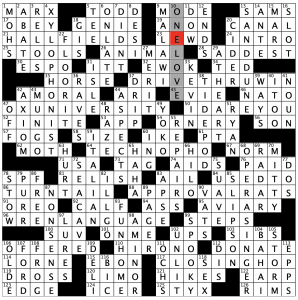 Fun grid and over-the-top wackiness, as is par for this type of theme from Evan. Lots of cross referencing with the companies being found in other parts of the grid. I didn’t find that to be of much help because I would forget where I’d seen the “missing” company in the grid by the time I got to the answer it was removed from, and it was too time consuming to go find it mid-solve. So I either appreciated them post-solve or just figured out what was missing without the help of the cross-reference, which was easy for entries like OX[FORD] UNIVERSITY or  DRIVE THRU WIN[DOW], but much harder for CLOSING [UP S]HOP and [MARS]HALL FIELDS (especially with the latter base phrase being unfamiliar to me).

I found the grid to be quite breezy and easy. Anything of note? Let’s see…

I believe EVIE Carnahan and Mazie HIRONO were the only new names for me (in the grid itself anyway) which is low for WaPo.

[National ___ Cookie Day (March 6)] OREO. Always love them OREO clues. Waiting for someone to clue it as [Cookie with a Lady Gaga variety]. Because that’s a thing now.

[Descriptor for a person from the Indian subcontinent, derived from the Sanskrit word for “country”] DESI. There’s a lot going on in that cl 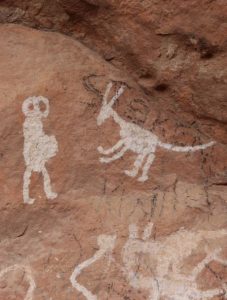 [Key of “Californication”] A MINOR. I think this may be the first time I’ve seen a MINOR/MAJOR entry clued with a pop song instead of classical.

[Tony-winning musical with the number “Welcome to Our House on Maple Avenue”] FUN HOME. Such a great musical. I saw it in a small downtown theater before it hit broadway.

Clue of the day right at 1-Across:

THEME: Currencies can be found backwards in common phrases. 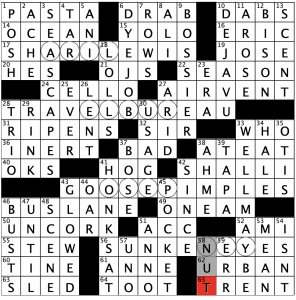 I’m sort of predisposed to dislike puzzles that Universal publishes with circles since it can’t publish circles in the regular publications that most solvers get, and I find it to be a major disservice to both the solver and the constructor. You can only get the puzzle with circles here, on this site, which casual solvers are unlikely to be aware of. It feels to me like Universal publishes more circle-dependent crosswords than most of the other publications (tempted to say “combined” here), yet it is the only major crossword without the technology to actually circle the letters when necessary. Go figure.

So, with circles, this one was just fine. Anyone who has been solving for a long time has no doubt seen a few currency-based themes before. No new ground broken here. Some old-timey feeling answers with SHARI LEWIS (whom I loved as a kid, but I’d be surprised if anyone under the age of say… 36 were familiar with her). GOOSE PIMPLES seems like something my grandma always said too (I’ve always just known them as GOOSE BUMPS, which sounds less gross). And SUNKEN EYES doesn’t strike me as a strong stand-alone phrase.

Sorry for the late post; it hasn’t been a normal weekend around here. And for that reason, I’m going to make this brief.

Our theme takes phrases that are more or less colloquial and then adds the first name of a famous person at the end. But that addition also can be added to the last word of the phrase to make an entirely different word. The two-part clues cover both situations. 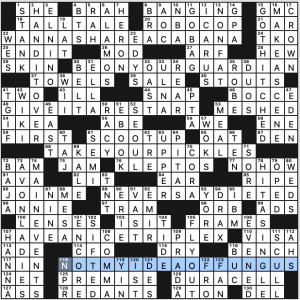 Pretty fun theme, eh? I wasn’t sure how idiomatic “Wanna share a cab?” and “Be on your guard” are, but aside from that I enjoyed the base phrases and their modified forms.

But what really stole the show is the top-notch fill: “HAND IT OVER,” TALL TALE, ROBOCOP, GOT HITCHED, MAKE A SCENE, SCOOT UP, KLEPTOS, MAIN EVENTS, and HIT A SINGLE. AVON LADIES is (or at least used to be) a well-known phrase, but it makes me wonder if anyone uses it anymore. Are there “Avon Gentlemen”?

I liked this grid a lot. Four stars.