THE SPOILS is our revealer (62a, [They’re divided by victors, and divided in four rows of this puzzle]). The four rows in question have circled letters—separated by a block—that spell out words that are synonyms of “spoils” (as in, treasure). The title is a spot-on hint to the theme as well.

The revealer, THE SPOILS, didn’t sit well in my ear because it just sounds like a long partial from the phrase, “To the victor go the spoils.” But I guess “divide the spoils” is also idiomatic. That phrase would actually be a grid-spanner, but then it couldn’t participate in the theme as it does, so it makes sense to use the clue to hint at “dividing.”

Personally, I don’t get too wowed about themes like this with little wordplay and words hidden in multiple other words. But when the chosen words are fun and surprising (like PEEKABOO TYRANT), that starts to make up for it. But the theme is solid overall.

Top bits of fill include STALWART (a lovely word), STOWAWAY, CRAYONS, ISLAMIC, and the Drake/Rihanna duet TOO GOOD. 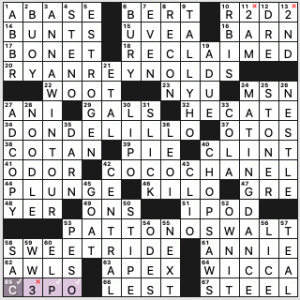 Fun theme, though the .puz format sucks when it comes to accepting a numeral in a square. RT(wo)-DT(wo), better known as R2-D2, and C-T(hree)PO, better known as C-3PO, are the Star Wars droids whose names inspire a collection of celebrity initials:

So that’s the theme. Always nice to have a fresh riff for a theme, but it’s best when the theme is ironclad. That coCo thing bugged me. If you’re just going with “letters in the name” rather than initials, then Patton Oswalt would correspond to POO, since his first name also contains an O.

Fill like STENO, UVEA, LEO I, COTAN, and A DUE never enchant me, and I’d rather there were fewer such entries here. 3.25 stars from me. 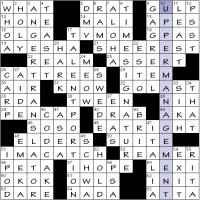 Terse write-up today, as I have an early appointment which will occupy most of my day.

If I knew more about the music group MGMT, I might have shared one of their songs here. No time to explore! 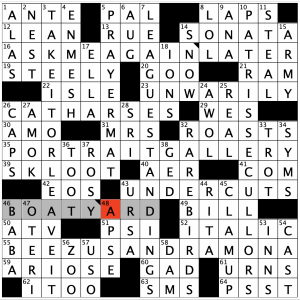 The AVCX has another guest puzzle this week, this time a crunchy 4.5/5 difficulty themeless from Brooke Husic:

ELLA Mai, named for Ella Fitzgerald, and her Grammy-winning song “Boo’d Up” 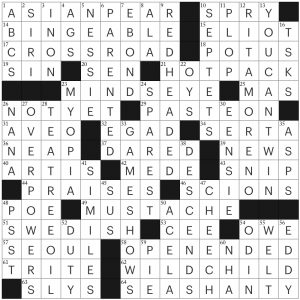 Helloooo everyone, quick writeup today. The solve felt a little clunky for me, I think because the grid shape is a tad awkward? Not totally sure why, but it just didn’t flow that well– but I don’t think that’s a reflection of the entries or clues, which were all around excellent, so much as a reflection of a sort of wonky grid shape. Still an entertaining and fun solve!

The long entries today were ASIAN PEAR / BINGEABLE / CROSSROAD / OPEN-ENDED / WILD CHILD / SEA SHANTY in the NW and SE, and OVERPOWERS / TEA TREE OIL / RITA MORENO / YOU CAN’T WIN as the long downs in the SW and NE. All great! I particularly loved BINGEABLE and SEA SHANTY (clued to TikTok sensation “The Wellerman,” which is now deeply stuck in my head). I also love the scent of TEA TREE OIL.

Overall, an enjoyable if not entirely smooth solve. Lots of stars from me! 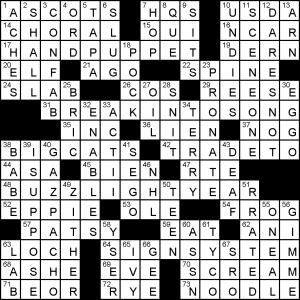 I like the slangy example of the “words with” theme concept used here. GIMME (which is rude, not sassy) a HAND/BREAK/BUZZ/SIGN, although some of those are more typically rendered as GIVEME. SIGNSYSTEM is notably dry and technical.

The puzzle features a cavalcade of abbreviations, foreign bits and other crossword clichés. When you balance USDA/NCAR over ARN you should really think about redoing a section. Similarly, HQS/QUE/OUI.