As you can see by my time, this one was harder for me than the most recent run of FB themelesses. No complaints! I made it more challenging by sticking with a wrong answer in the NW for way longer than I should have.

4d [Ropes in] is ENTICES, which makes more sense than ENLISTS. I know this now. I couldn’t see my mistake for quite a while and thus the rest of the corner made no sense. This was made worse by my confident assumption that Freud must have studied EEGS as a teen when in fact (according to Peter) he studied EELS. This became more embarrassing when I looked it up, because Freud was born in 1856 and the first EEG was recorded in 1924. Props to Peter for finding a new and very obscure clue for an old crossword standby. 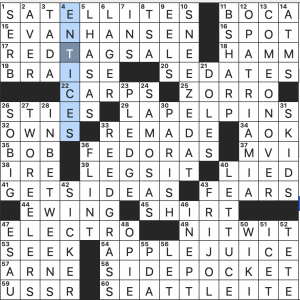 What I didn’t know before I did this puzzle: that V-8 juice contains LETTUCE. 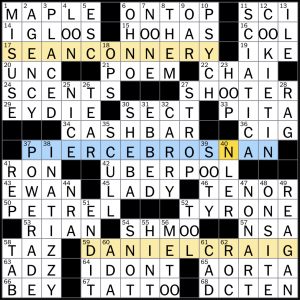 But there’s also a double-O 7 – 7 rebus squares that each contain two Os in the grid.  These 7 squares are placed in the grid such that they make a 7, as seen below. 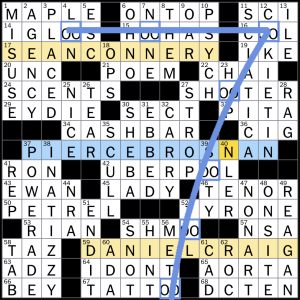 Other fill of note: CASH BAR, PETREL, RIAN Johnson of Knives Out fame, SCIATICA, POWERADE, and IN A TIZZY

A good title hints at what’s going on in the puzzle without giving anything away, and that’s exactly the case here. Each theme answer is a food item with an appended -IES at the end, wholly changing the meaning of the phrase. 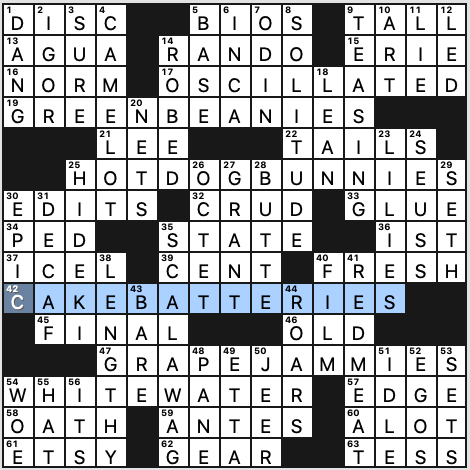 I thought this was a cute theme, especially when I realized how apt the title was. The additional letters (the N and M) didn’t bother me, but there is a little inconsistency in that the first part of each phrase also changes meaning in all cases except the third one. Also, cake batter isn’t exactly a food item (for most people).

If the theme didn’t float your boat, there’s plenty of chewy long fill to go around starting off with CAMELOT and SCALAWAG. RED MEAT gets a cluing angle that I’d never heard before [Language intended to appeal to one’s followers], but I liked the trickeration in OSCILLATED‘s clue [Did some swinging]. WHITE WATER and SOLITUDE round out the top fill.

Cute theme and good fill. Clues felt a little heavy on the trivia side, but they’re mostly inferable. 3.75 stars.

This is my second attempt at this write-up. I just got done with the first and have no idea where it went in the land of the internet. Oh well! Let’s try again: 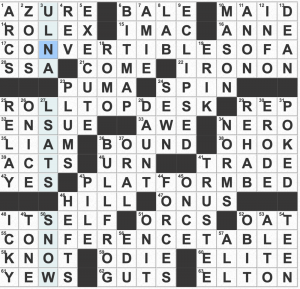 Dad jokes abound! I actually didn’t see much of the theme while solving. I was thoroughly enjoying the cluing of the puzzle’s fill. Looking back, there’s not much “splash” in the fill, but with fresh, fun clues it doesn’t much matter. Those include:

I’m not 100% confident I understand how the title relates to the theme. What’s the 101 for? I get that each has to do with a certain vocation, but not sure how they would be considered akin to introductory courses… 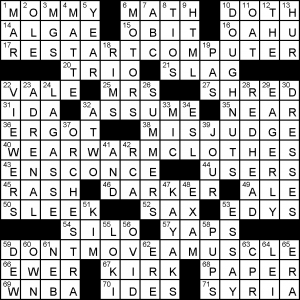 This puzzle provides instructions in the case of three different freezes: RESTARTCOMPUTER, WEARWARMCLOTHES and DONTMOVEAMUSCLE. The second one is appropriate for us in the southern hemisphere. The third, well it’s worth noting that if you get the wrong cop, the advice is superfluous.

Three theme entries allows the puzzle to not be nearly so constricted as in other puzzles of late.

It’s late, so here’s the grid and a quick take: each theme answer is a phrase with an F where a T should be that creates a wacky food group. 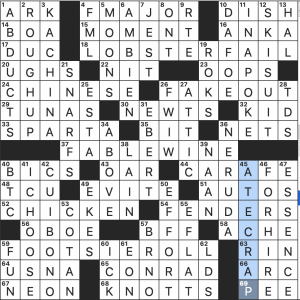 What I didn’t know before I did this puzzle: that Lysander led the navy in SPARTA.