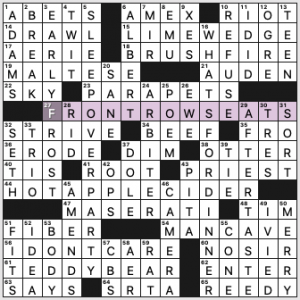 Robyn also constructed one of this weekend’s ACPT puzzles. It’s always a treat to solve her puzzles and I’m hoping she’s got the finals puzzle because I especially love her themelesses. (Don’t we all?)

I inadvertently frittered away most of the evening so I’m late to the puzzle. Let’s be brief! (Am I ever brief when I promise to be? I suspect not.)

Neat grid with the matrix of 13s and 14s intersecting. Fave fill: LIME WEDGE, BRUSHFIRE, FRONT ROW SEATS, HOT APPLE CIDER, MASERATI, MANCAVE, I DON’T CARE, TEDDY BEAR, EARLY FROST (also annoying: a late freeze, such as the Midwest and Northeast have just had), “WHAT’S FOR DINNER?” and AFTERTASTE. The CIDER and FROST make the puzzle feel like it should have run in October.

Just three clues (hard to choose! there are at least five question-marked clues): 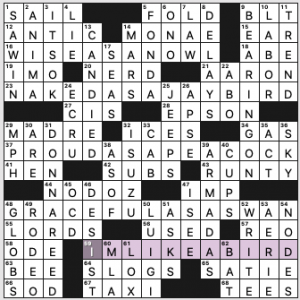 Somehow, the ostrich, emu, rhea, and cassowary are left out of the simile party. Dangerous as a cassowary?

The fill is peppered with pop culture: Music’s Janelle MONAE, REO Speedwagon, composer Erik SATIE ([French composer Erik who purported to have only eaten white foods]); TV and/or film’s ABE Maisel, Time LORDS, DONNA REED; Broadway’s AARON Tveit, “She USED to Be Mine” from Waitress, and “Me and the SKY” from Come From Away; a ComicCon (etc.) NERD; multidisciplinary Jane FONDA and Yoko ONO; literature’s ARE You There God? It’s Me, Margaret and a specific contemporary ODE (see below); and video games’ LUIGI. I enjoyed it all.

Fresh clue for ODE: 58a. “___ to the Female Reproductive System” (Sharon Olds poem)]. OMG! I had not heard of this poet before, but I checked out the table of contents for her Odes book, and there are dozens of odes in this volume. “Ode of Withered Cleavage,” “Ode to Menstrual Blood,” “Ode to the Word Vulva,” and many more. Well! I navigated straight to my local indie bookstore’s website and ordered myself a copy. 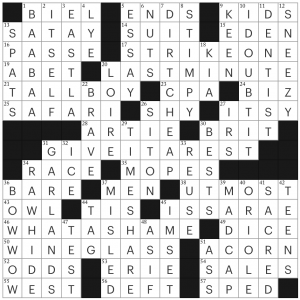 Happy Friday folks! We’ve got a fun and breezy puzzle from Caitlin Reid, master of entertaining, easy themelesses with shiny entries and engaging clues. What a great puzzle to kick off ACPT weekend!

The longer stuff today includes GIVE IT A REST (my favorite) / STRIKE ONE / LAST MINUTE / WHAT A SHAME / WINE GLASS / TIMESHARE / DIRT CHEAP. GIVE IT A REST is so evocative! And the clue [“Oh, stop complaining already”] is a great translation. These are all great long entries, sprinkled throughout the puzzle instead of in stacks, which made for a pretty smooth and straightforward solve. I always find those little staircases-with-an-extra-long step funny because they remind me of my basement stairs, which I have been informed are a “health hazard” and “not up to code.”

Overall, tons of stars from me; this was a fun, easy, well-clued-and-gridded themeless Friday. Good luck at ACPT to those who are competing, and pick up your BAF puzzles if you have not yet done so!

Well, it’s not all Greek—only the beginning part of each theme answer wherein we find two Greek letters put together that sound like the original words from the original phrases. 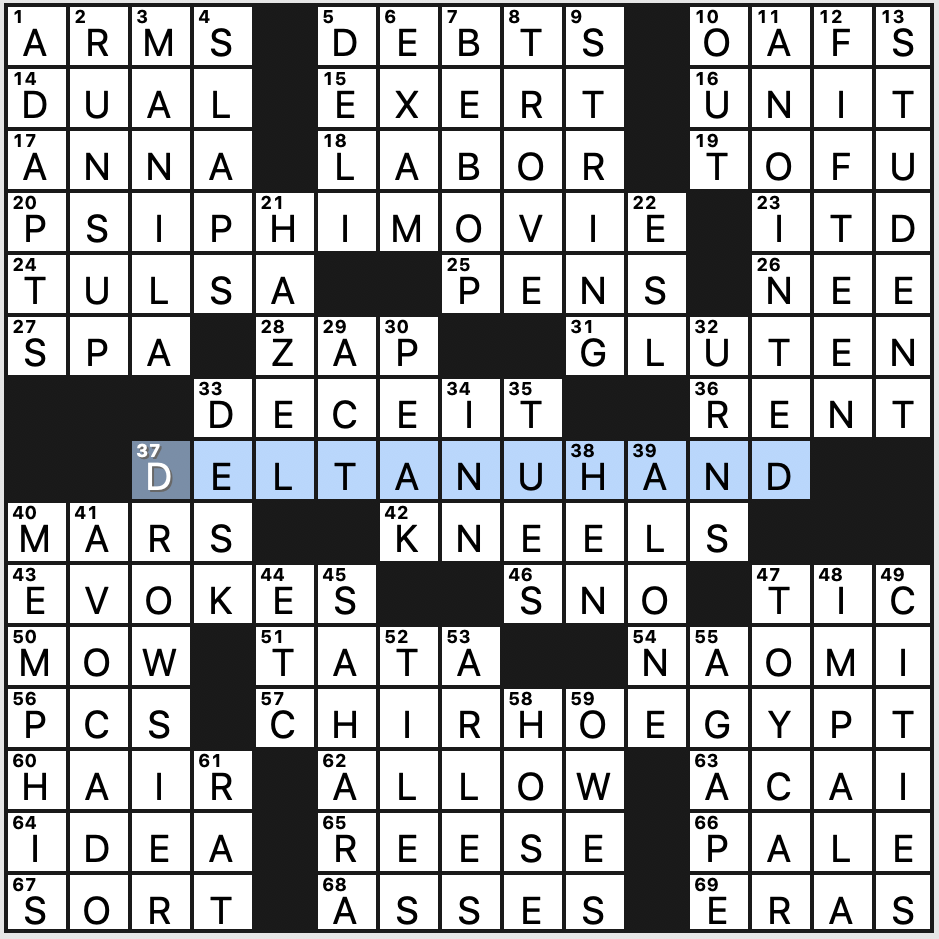 On the one hand I wanted another theme answer because I thought these were interesting. On the other hand, the clues are on the unwieldy side, and when you’re solving for time in order to practice for the ACPT (you’re “going,” aren’t you?) trying to wrangle a squirmy clue takes a bite out of your time. Still, these were goofy but fun.

Having only three themers I would hope to see plenty of zippy fill, but the blocks on either end of an 11-letter central entry put some limits on what can be done on the sides of the grid. As a result, this puzzle doesn’t feature long marquee non-theme answers, but it does have some hefty corners, and they’re nicely filled. I like the MEMPHIS / AVOCADO stack. 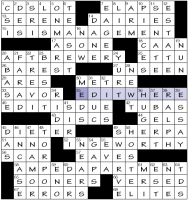 A 15×16 grid accommodates the two-part themer in the central rows. I didn’t understand what the theme was until finally completing that section, though to be honest as I was flying through the crossword, only half an eye was focussed on what the theme might be.

So these are all obviously missing an initial CR: crisis management, craft brewery, credit where credit is due, cringeworthy, cramped apartment.