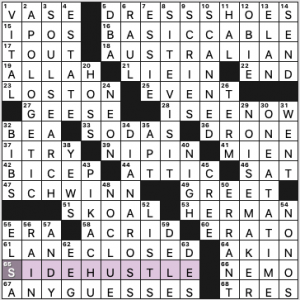 I bet I’m not the only one who gets happy seeing a woman’s byline on a themeless puzzle, anticipating that it’s gonna be really good and put out good vibes. Kate Hawkins’s puzzle rises to the challenge. SIDE HUSTLE is just a great, modern entry. DRESS SHOES looks bonkers with that SSSH shushing us in the middle. BASIC CABLE, the SCHWINN bike of my childhood, the dreaded LANE CLOSED (ahead), “ANY GUESSES?,” SOUL-SEARCH, PIKACHU, DIANA ROSS, SITE VISIT, NOISEMAKER—I liked them all.

Two new names for me tonight: 7d. [Davis of “Miss Fisher’s Murder Mysteries”], ESSIE / 32a. [R&B/jazz artist Booze who sang “See See Rider Blues”], BEA. The AUSTRALIAN (18a) ESSIE Fisher series had an airing on PBS and apparently is available on Netflix. Wikipedia tells me BEA Booze was an R&B/jazz singer and a blues guitarist back in the day. Ma Rainey recorded “See See Rider Blues” in the 1920s, and Booze had a hit with her version in 1943 (below). I appreciated learning about both of these artists, BEA and ESSIE.

Could have done without the I SEE IT/I TRY repeat, and OBIE is, I daresay, obscure to non-crossworders who aren’t in the NYC theater community. But overall I liked the puzzle; four stars from me.

I sat for several seconds after the solve trying to figure out the theme. Then the light bulb went on.

Each of the main theme entries has the word ONE appearing twice within. There are four entries, hence the title. 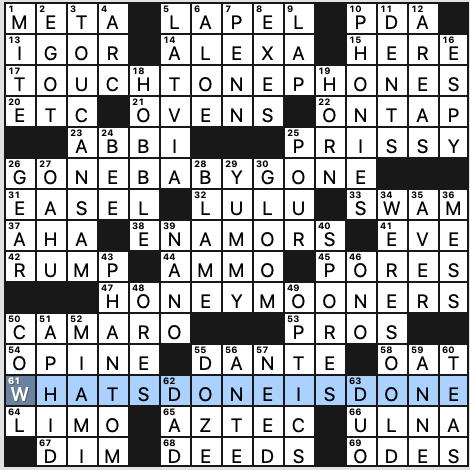 What a nice set of themers, including a couple of grid-spanners.

And check out the fun long fill: TOUCAN SAM, “WE’RE SO OLD!” (Ha, I love that one!), plus PHONIES, PHANTOM, LATVIA, PRISSY, CAMARO, OPTICS, and HOBBLE. Even the short stuff is good: YUMMY, GLOOM, DANTE, AZTEC, ALEXA, and director LULU Wang.

The only entry that snagged me was 23a [Jacobson of “Broad City”]. I went with ABBY before realizing it was ABBI.

You know what, this puzzle’s got it all: a clever theme expertly executed (including grid-spanners), squeaky clean fantastic fill, and fresh cluing. (Universal puzzles don’t usually get the really fun, tricky clues, but straightforward, fresh clues are almost as good.) Evan sure made this look easy, even though I’m sure it was not. A lot of time went into making this one as nice as it is. 4.25 stars from me. 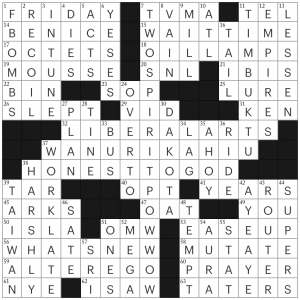 The thing I most love about Erik’s crossword puzzles is how *thoughtful* they are. The care and consideration that he puts into his puzzles is apparent in every single clue, every run-of-the-mill crossword entry that could have been clued the same way it’s always been but wasn’t, every entry that has never appeared in a mainstream puzzle before, every crossing and every black square. These choices are so clearly *choices*; they are the product of intention and reflection and active affirmation rather than the passive result of letting Crossfire do its thing or relying on clue databases for a quick reference. I just love that.

Case(s) in point: The grid-spanning TWO-SPIRIT POWWOW [Native gathering that defies colonial gender norms] has never appeared in a mainstream puzzle before (and likely has also not appeared in an indie puzzle before, although I have no way of actually verifying that). I was unfamiliar with TWO-SPIRIT POWWOW, but I am certain there are solvers for whom seeing this in a crossword puzzle is validating and empowering. Similarly, director WANURI KAHIU has also not appeared in a puzzle before, but here she is literally centered, recognized for her achievement directing [2018 Kenyan lesbian romance “Rafiki”]. LIBERAL ARTS is clued as the [Focus of Spelman and Morehouse], two historically black colleges. Even the entry ONES, often clued as low-denomination bills, is here clued as a fill-in-the-blank in a poem by June Jordan, a bisexual poet and essayist. The line “we are the ONES we have been waiting for” comes from her “Poem for South African Women,” and then became the title of a collection of essays by Alice Walker, and then was used by not-yet-President Obama in a 2008 campaign speech. This clue was a choice that Erik made, and it is thoughtful and powerful, like everything else in this puzzle.

Overall, all the stars from me for this beautifully crafted puzzle.

PS. For a really insightful conversation on representation in crosswords, check out this conversation with constructor Brooke Husic (featuring Erik, Will Nediger, and Andy Kravis, and Andrew Kingsley) from the Boswords Spring Themeless finale. 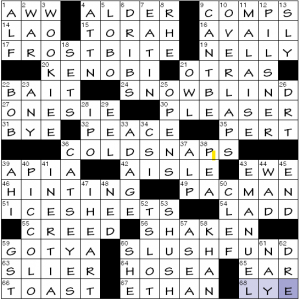 Okay, let’s just get this out of the way first. 13d [Wily] SLY, 63a [More cunning] SLIER. A blatant duplication like this from a reputable outlet suggests to me that it wasn’t in the constructor’s original submission, nor the editor’s first go. It implies that the crossword underwent multiple edits and that this gaffe was introduced in one of those iterations, then somehow stayed under the radar.

Back to the main event. Theme is words and phrases reinterpreted as being literally about (for now) frigid polar regions.

Ya these are all fine. 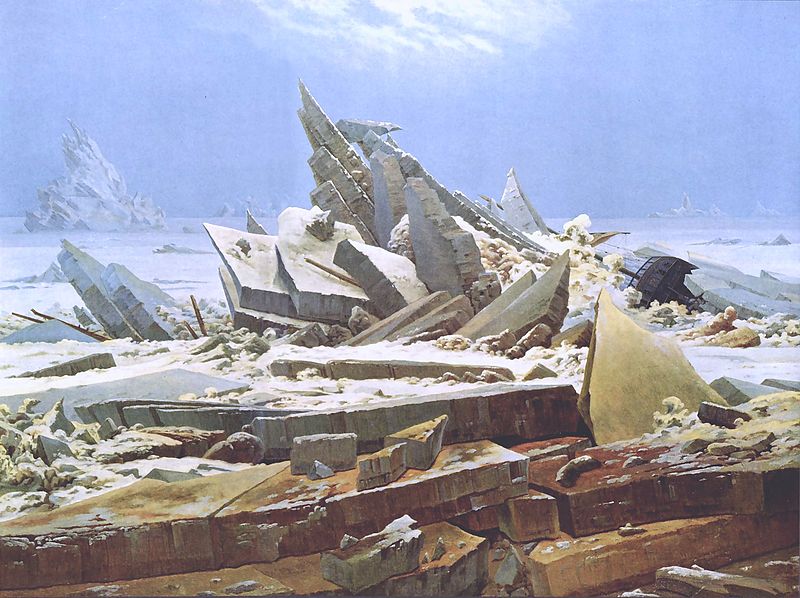 That’s all for me. Try to keep a cool head.