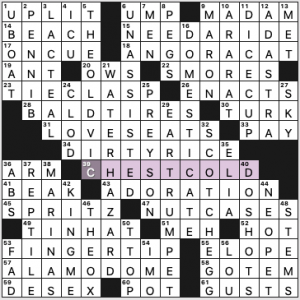 Ryan McCarty has some serious chops. You see the midsection of this grid? That sliding stack of seven longish entries crossed by yet more longish entries? This seems to be his trademark, as this grid is quite similar to the one in his Boswords Spring Themeless League puzzle (#5). And he’s not relying on junk like SEERESSES to hold everything together.The NE and SW corners are fairly cut off, but each has two routes in from the center. The whole thing felt more like a Friday puzzle to me, no trouble spots that help me up. 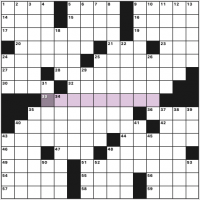 Less keen on plural interjection OWS, PEN NIB (which maybe shouldn’t bug me, but it looks weird in the grid), LACTEAL, and ELIA, though that ELIA clue is sharp: [Essayist who wrote “Newspapers always excite curiosity. No one ever lays one down without a feeling of disappointment”]. 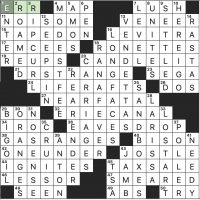 Great puzzle! I am starting to love Ryan’s puzzles. (Not that I didn’t before!) This puzzle has quite an impressive stack of 10 9-letter entries in the middle. In going through the puzzle, I try to find interesting entries to highlight, and it is amazing that none of these are forced, and many of them are quite unremarkable in their commonness. This is extremely hard to do, and Ryan pulls it off expertly. This is not too difficult of a puzzle, but the enjoyment level is quite high. A robust 4.7 stars from me today!

Off to solve more puzzles! 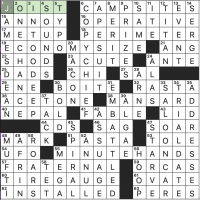 I think the “Stumper” difficulty is back up just slightly. Or maybe I am working too hard! It has been a rough few weeks. But summer is coming! I think. This puzzle had me slowed down a bit early, got a decent pace in the midsolve, and I finished in the NW then the NE areas of the puzzle. Still not frustratingly hard, but enough resistance to give me minor fits. Perhaps you found it slightly easier, but I thought this packed a bit of a punch. But that is to be expected from a Greg Johnson themeless. I will take 14 minutes or so on this one; I think my barometer now may be to finish under 15 minutes, not 10! 4.6 stars today.

A puzzle that’s after your heart. 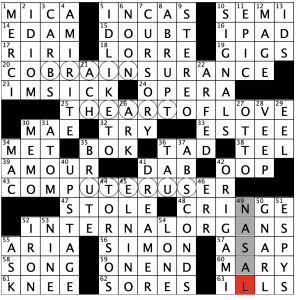 Cool. Very similar in concept to the last collaboration I solved in Universal a couple days ago. I don’t know why it seems like sometimes Universal runs similar themes very close to one another. That’s probably just me.

Both COBRA INSURANCE and THE ART OF LOVE were brand new to me. However, I was able to figure them out with very few- if any- crosses since the title, the circled letters, and a little inferring worked synergistically. And they’re such colorful names! So I rather enjoyed learning them. Ironically, the familiar one (COMPUTER USER) I found a little bland in comparison.

Nothing too much to make me CRINGE in the fill, though MICA being in 1A had me bit leery for a moment (feels a bit crosswordy to me, but of course it’s a legitimate entry). OK, ARFED may be pushing it a bit, but it’s so danged cute that it’s hard to grimace for too long.

I feel like I usually see the plural of TORSO as TORSI, AMIRITE? Lemme check… ah! Either.  TORSOS or TORSI.

Lastly there’s my frequent complaint that Universal runs puzzles that are better served with circles, yet can’t provide the solver with those circles on its more widely available platforms. I don’t believe this one suffers much from that pitfall, though I can’t tell. It would be a different solve experience altogether since, on one hand, I wouldn’t have caught onto the gimmick early and the aforementioned synergy wouldn’t have existed. On the other, it might be more fun to look for the organs yourself. I dunno. It’s very strange to me that they’re offering two different solve experiences. 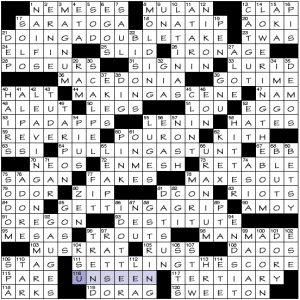 Today we have in-the-language phrases recontextualized as pertaining to film production, in a more literal fashion.

Seemingly having achieved some sort of minor success, the WOMAN takes a triumphant sip of the coffee, then resumes typing.

We see words appearing on a COMPUTER MONITOR. They appear to be transcriptions of a crossword puzzle's clues and answers.

Not part of the theme: 6d [They may be big on movie sets] EGOS, 82d [Hollywood trickery, briefly] CGI, 116a [Like voice-over narrators] UNSEEN.

CUT TO
CLOSE-UP of more coffee being sipped. Then

CUT TO
OVERHEAD VIEW of KEYBOARD, MONITOR, WOMAN. She begins to type again, but a CAT walks across the desk, probably garblingglksdkdhe eelem soejenornfjm   The cat nearly knocks over the coffee cup as well.

CUT TO
¾ VIEW of woman's FACE. Somehow the images on the computer screen are projected across her features. Do not question this. More typing.

She takes a vaguely dissatisfied sip of coffee, as if she cannot remember the name of some Native American language, or perhaps she is recalling that there is no yogurt in the house. The camera

PANS to see her putting the CUP down on a coaster, to the MONITOR, over to a WINDOW, where we can see outside it is a clear, verdant, crisp morning. Birds are chirping in the trees and all seems right in a world laden with possibility. We hear the CAT leap onto her lap, purring. She begins to say something as

an ENORMOUS METEORITE impacts the entire house, obliterating everything inside.

~ A FILM BY CHANTAL AKERMAN AND MICHAEL BAY ~