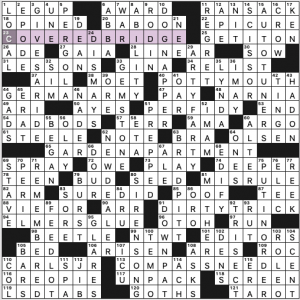 Not quite sure how to summarize the theme. Let me iron out all the theme entries first and see if looking at them all in one place yields a good description:

Okay: Second part of each clue is a noun, or maybe a verb, and the theme answer is a phrase (or compound word, in one case) that starts with a word with that designated initial and ends with a synonym for the clue word. A span is a bridge, C-Span is a COVERED BRIDGE. E-bond is a money thing, and glue bonds things together, so we get ELMER’S GLUE. A force can be an army, and a G-force is, instead of gravitational force, the GERMAN ARMY. Span, con, force, and bond can all be verbs, but the theme entries are all nouns. Feels a little uneven and not defined as specifically as I’d like. Any crossword theme should be something you can explain to someone clearly in a sentence or two, and I don’t know that this one hits that mark.

The theme answers are idiomatic phrases that refer to success clued as if they referred to a specific location. 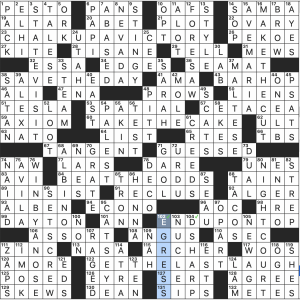 It’s solid and consistent. Not my favorite kind of theme, but that’s OK.

It’s a gorgeous day here and the outside is calling me, so I’ll end it here. What I didn’t know before I did this puzzle: that ZINC follows copper on the periodic table. 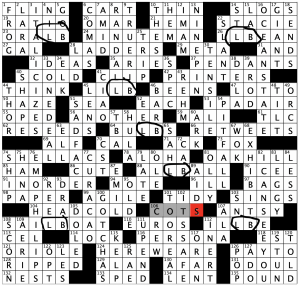 THEME: LB (i.e. a POUND) has been lifted from common phrases.

Wow. Toughest WaPo I can remember solving in a long time! It definitely didn’t help that I didn’t see the gimmick in this (excellent) theme until very late. I don’t know how I missed that. I think it’s because I was set on the answer being PERSONAL RECORD instead of PERSONAL BEST and, after a glance at the title, I was expecting a unit of weight to rise vertically somehow (you’ll see there is the letter L over the last letter of PERSONA that threw me). Still, finding it late helped me fill in the holes and complete the puzzle that I was all but certain would lead to a DNF at one point.

That may sound like I’m describing a slog of a solve, since in the back of my mind I wasn’t sure I’d finish, but it wasn’t at all. I’d call it “delightfully difficult.” Tons of misdirection and inferable new stuff to learn. New names, of course, which didn’t irk me today (sometimes a host of new names annoys me- it really depends on my mood, I’ve discovered).

Some fun difficulties include:

Well there’s OMAR Jimenez, ALAN Ruck, and LARA Flynn Boyle, who were all familiar to me, but I don’t often see in grids (glad to see OMAR Jimenez in there!).

Anyway, outstanding puzzle that is beautifully constructed. Though constant WaPo solvers are used to it, it should be noted that when LB is lifted from each phrase, it still results in perfectly valid entries SEA / EACH, META / AND, PERSONA / EST, etc. Easy to take that for granted, but it’s important to solve enjoyment. That and the LB entries didn’t raise an eyebrow as being awkward (and there’s a lot of constraint that happens because of that). Kudos.

Today’s theme entries consist of phrases where one word normally starts RE-. Those letters are reversed and placed at the end of the same word to make an entirely new crossword-wacky phrase. 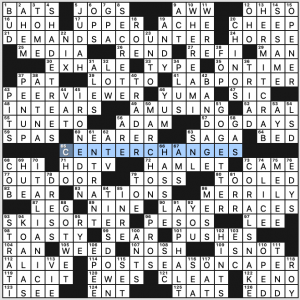 Hit and miss for me. I like the solid, consistent execution, but I just can’t get excited about things like LAYER RACES. Your mileage may vary, of course.

The fill has a lot of great stuff, though: SHADE TREES, HERMIT CRAB, CORAL SNAKE, ITALIAN ICE, “WHERE AM I?,” GO-GETTER, DOG DAYS, CHINOS, and TOASTY. 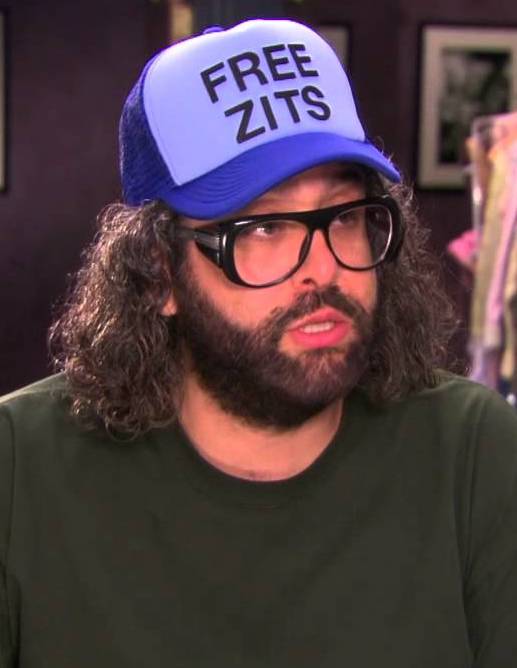 The theme is solid if not particularly exciting. The fill, though, is clean and sparkly. 3.5 stars. 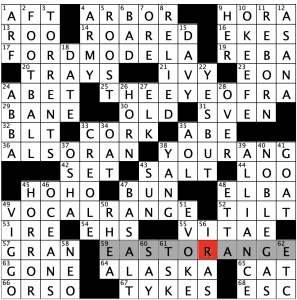 I really struggled to understand the A in the first themer and how that related to the growing ORANGE. I just now realized that it’s actually rather perfect. The orange is “growing” from the middle, not left-to-right as I had originally assumed. Also, what’s quite nice about these entries is that each part of the ORANGE, as it grows, is its own separate word without feeling forced. Great finds to fit symmetrically, and with six themers, it’s no wonder the word count is 80 in this one.

Didn’t really notice much to like or dislike in the fill. I think I was more focused on what was going on in the theme. Salners’ puzzles are often very clever and when I see the name in the byline, I am usually focused on uncovering the theme rather than the fill. Looking back, I feel about the same.

Excellent post-solve AHA on this one.