If you like Ross Trudeau’s puzzles (and I do!), check out his website Rossword Puzzles where he posts new puzzles for free every Sunday and writes about those puzzles and life in general. He’s a generous mentor and a cogent observer of Crossworld. Today’s puzzle is a solid Monday offering – accessible and enjoyable.

I didn’t figure out what was going on until I got to the revealer. 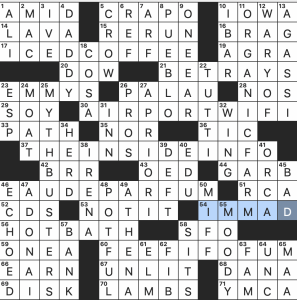 What do all these things have in common? 60a [Fairy tale chant from a giant … or the ends of the answers to the starred clues] is FEE FI FO FUM. I like that the spellings are accurate as well as the sounds.

It’s been a long (and good) day so I’ll stop here. Hope everyone is enjoying the warm weather we’ve got in PA! 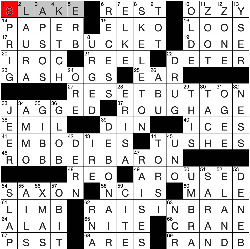 We lost Gail Grabowski in December, but clearly she still had one or more puzzles in the hopper, so it’s nice to see her byline again, together with my former constructing partner Bruce Venzke’s. This puzzle, as 69A [Ray Charles’ genre, and a hint to the answers to starred clues] states, is about R AND B, although the theme isn’t musical at all, just two-word phrases with the initials R.B. Such as:

The theme and the fill seem mismatched with each other. The theme certainly does lend itself to Monday; “phrases with the same initials” is pretty common and straightforward. I don’t even know that you need the asterisks, given that there are no fill entries longer than the themers. But KETCH, ELKE, YSER, OGEE, DENEB all seem like they don’t belong in a Monday puzzle. ELAND also, because at five letters [African antelope] could lead you as easily to ORIBI if you have no crossings, and even though an OKAPI isn’t an antelope, you can be forgiven for not keeping your five-letter mammals straight on a Monday morning.

I did like seeing LAURA DERN in the puzzle. Love her! 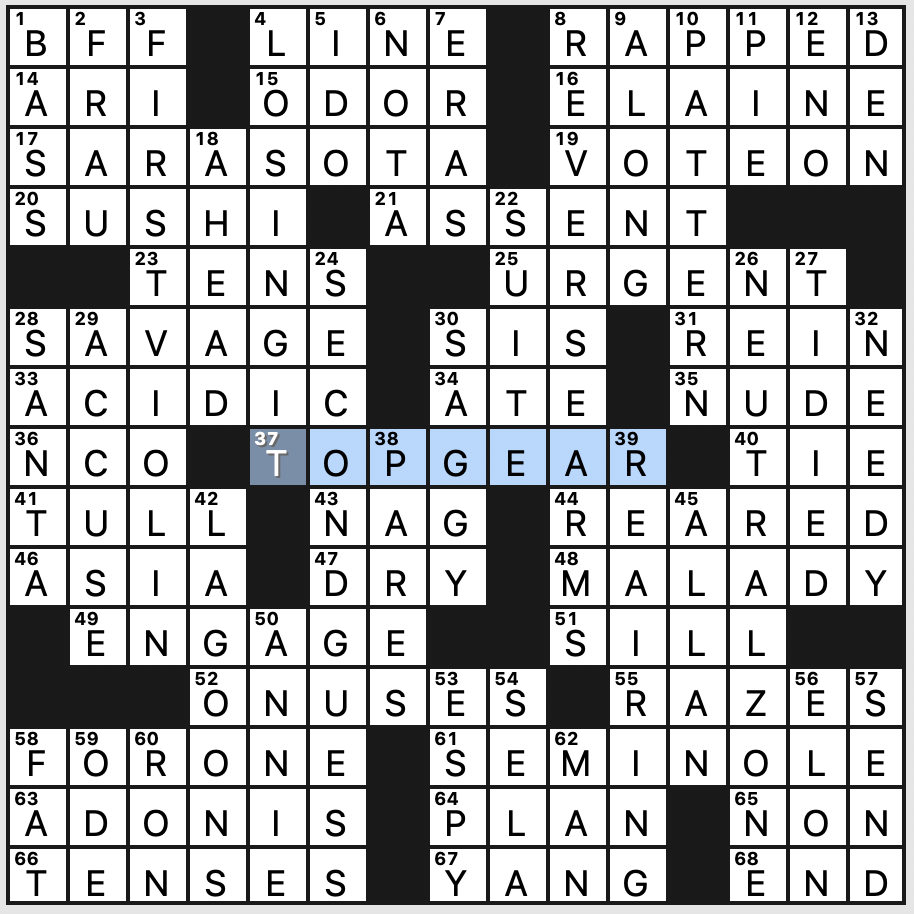 Well, it’s not a complete set of car gears; you’d need third and fourth (and maybe fifth), assuming we’re talking about a manual car. But for what it is, it’s fine. I like the choices of entries, including the one I’d never heard of before.

In the fill, there’s a mini-Florida theme with SARASOTA, SEMINOLE, and controversial governor RON DeSantis. Apart from that, I liked LAGOONS and LOSING IT. There’s very little to scowl at as well.

Clues were clearly on a Monday level, allowing for a zippy solve time, but that also means I didn’t spot any noteworthy ones. 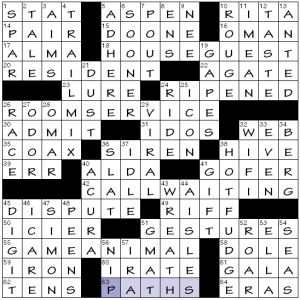 I’m really souring on the term “game animal” and associated implications these days. 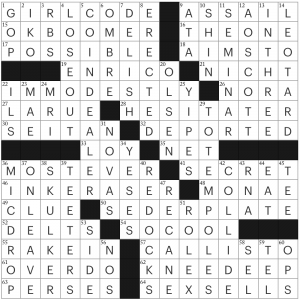 Helloooo very quick writeup today because I have a six hour drive ahead of me. Bullet points only!

Overall, not my favorite New Yorker, but still decent! Several stars from me.

Tougher than the last few have been! Dinner is nigh again, so here’s the grid and my hot takes: 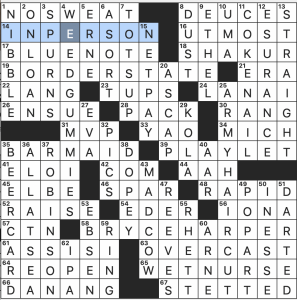 What I didn’t know before I did this puzzle: oh, so many things. That Tupac SHAKUR was inducted into the Rock and Roll Hall of Fame in 2017, that YAO Ming is president of the Chinese Basketball Association, that Saint Gabriel of Our Lady of Sorrows was born in ASSISI, that the seven of diamonds is called the BEER CARD.