This week we’re told, The answer to this week’s contest crossword is a five-letter adjective. There are five starred themers: 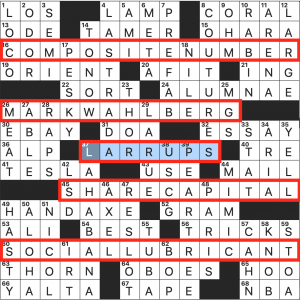 Mike’s puzzles often feature a bonus themer as the last horizontal clue, and this week was no exception:

The first letter of each city reveals BASIC, this week’s meta solution. Here’s a song from The Smiths’ classic 1985 album Meat is Murder