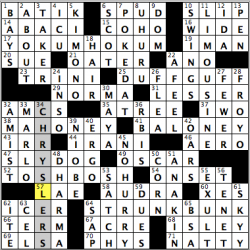 Hello there, everybody! Hope you all are doing great as we try to start this new month in style!

Today’s grid is all about some rhyme time and, in a way, trash talking, with the last names of celebrities and/or fictional characters paired with rhyming words that highlight nonsense talk.

Had a little bit of a tougher time cracking the middle left portion of the grid than I probably should have, as I knew AMCS (32A: [Ramblers and Pacers, e.g.]) just fine but managed to somehow type “cruiseers” (though I meant “cruisers”) for what turned out to be CHRYSLERS (34D: [Some minivans]). Speaking of whips, we have another car in the grid with LIMOUSINE, with a cute clue to boot (11D: [It can be a stretch?]). Three partials in the grid starting with “A,” with the one for A-MIST getting me for a while given that I could not recall ever hearing of that before (32D: [Love-in-__ (flower]). I’m sure a few of you might have those in your garden, let alone come across the flowers before. Love the clue/entry pairing for UHURU (8D: [Black ___ (reggae band)]). Oh, and before leaving, definitely have to let me know which ISLEY Brothers song is your favorite (68A: [The ___ Brothers (“It’s Your Thing” group)]). For me, it’s definitely Footsteps in the Dark (what an intoxicating beat), with Live It Up being a dark horse in terms of needing to dance and needing a boost.

“Sports will make you smarter” moment of the day: MAYA (30D: [Rudolph of “SNL” fame]) – Listing the on-court accomplishments of basketball legend Maya Moore would be more than enough to explain her greatness: 2x national champion and 3x national player of the year at the University of Connecticut and 4x WNBA champion and 2014 WNBA MVP while with the Minnesota Lynx. But during the height of her career, in 2019, Moore took a sabbatical from basketball to focus her energy on criminal justice reform and advocacy, particularly working to help free a man who was wrongfully imprisoned for two decades. The man, Jonathan Irons, was convicted of a burglary charge at age 16 just outside of St. Louis despite no corroborating witnesses, fingerprints, DNA or blood evidence linking him to the crime. (He was tried as an adult and was found guilty by an all-white jury.) In March 2020, Irons’ conviction was overturned by a Jefferson City, Missouri state judge. On July 1, 2020, Irons walked out of prison a free man. In September of 2020, this happened between Mr. Irons and Ms. Moore… 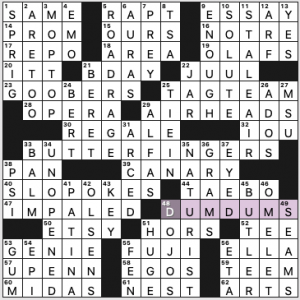 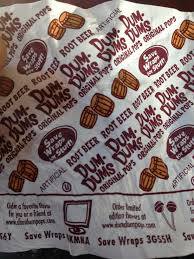 I enjoyed the theme, and the puzzle was on target for a Tuesday level of easiness. I do wish that the (iffy) entry STALE AIR weren’t crossing themer AIRHEADS. It’s too airy. I feel a draft in here! 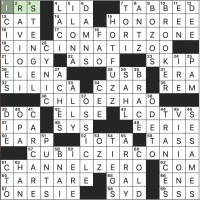 Or perhaps the title should be “CZ Them! We are dealing with phrases with the initials CZ:

I saw a lot of Z’s happening early in this solve, but that is only half the story. I am thinking this theme was totally inspired by the win from 36-Across at the recent Oscars that nobody was watching. I will watch Nomadland soon to see what the buzz is all about. I have seen a couple of the other Best Picture nominees, and they are fairly good. 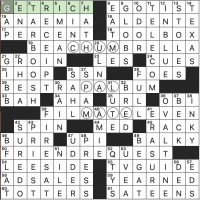 Be a pal and enjoy this review!

Are we friends now? Yes, each of the words could be used as an opener when you want to ask someone to help you move! Very nicely done, and it almost looks like a themeless grid, so well done Prasanna! I count 72 words, which is heading down to themeless word count territory. A fun solve: 4.4 stars today.

THEME: The word SAND can be found jumbled in common phrases. 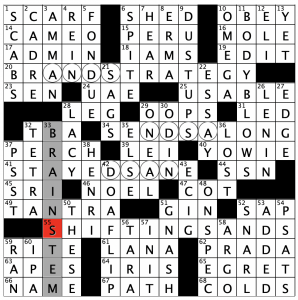 This puzzle strikes me as a perfect one for introducing newer solvers to this theme type. Clean fill, transparent theme, and a crystal clear revealer.

For me it was a fairly standard solve. Nothing really grabbed my attention. SHIFTING SANDS is certainly a valid phrase, just not one I use or hear very often. Same goes for BRAND STRATEGY. And STAYED SANE doesn’t quite feel like a stand-alone phrase to me. Don’t get me wrong, the puzzle works just fine- and it was in my strike zone, but just a little outside.

I don’t understand the clue for 33D [Natural sleep aid?] BRAINSTEM. Good entry (as is its symmetrical partner BODY BLOWS), but lemme go ahead and google that. Aha! Things I’ve forgotten from biology class. This explains it.

This theme is better served with circled letters, which Universal is unable to accommodate in its widely available platforms. So while this is an excellent introductory puzzle imo, it has a problem. Circled letters are a clear, clean visual aid. Asking solvers (especially newer ones) to count and mentally circle their own letters is a bit much. I’ve seen it fall flat many times when co-solving Universal puzzles that employ this technique with beginners. I don’t understand why they are offering two different solving experiences (download the puzzle as it should appear from this blog, or solve it on paper/ in web applet). 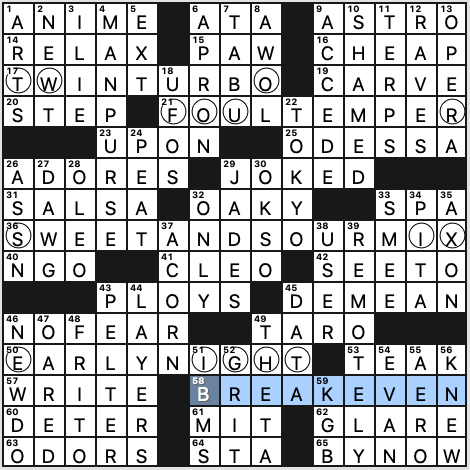 It feels weird to call a number an EVEN, using that word as a noun.  That said, I am impressed that the first four even numbers are found hidden in lively answers and that everything fits in numerical order as well as symmetrically.

MANPURSE tops the fill along with the skateboarders’ clothing brand NO FEAR (which is not the same as L.A. GEAR which I tried first). On the shaky side there’s roll-your-own PELTER as well as NEW DO, which feels incomplete.

I’m still not so keen on the revealer, but everything else is solid. 3.6 stars.