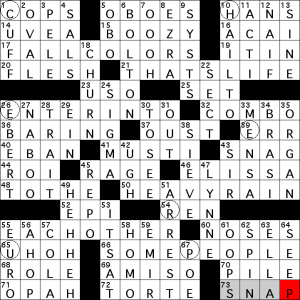 hello and welcome to episode #674 of matt gaffney’s weekly crossword contest, “Please Form Two Lines”. for this week 5 puzzle, the instructions tell us that we are looking for a seven-letter, two-word phrase. okay. what are the theme answers? there are six longish across answers in the grid:

i noticed more or less right away that each of these was a two-word phrase including one four-letter word: FALL, LIFE, INTO, RAIN, EACH, and SOME. thinking about those for a moment suggested the phrase “into each life some rain must fall”, which i had never noticed before was a seven-word phrase containing only four-letter words. that enabled me to notice the seventh theme answer, a short one in the middle: {Question from the reluctant} “MUST I?”.

so that’s clearly the first step. what next? “into each life some rain must fall” is a song by ella fitzgerald & the inkspots; i definitely thought about INK SPOT, which is a two-word phrase with seven letters. but ella’s backing band was the inkspots, not the ink spot(s). moreover, the title says to form two lines, and we only have one. gotta keep looking.

“into each life some rain must fall” gives us a clear reordering of the seven theme answers. could the second line be formed from just the other word in each themer? i was excited about this idea until i wrote down ENTER OTHER THAT’S PEOPLE HEAVY I COLORS, which is not a sentence even in the chomskian sense. similarly, looking at the first words of the theme clues gives nonsense (“become themselves these the forecast question orange”).

however, scanning the clues, one non-theme clue jumped out at me: {“Must Love Dogs” got two stars from him} EBERT. that’s a totally arbitrary way to clue EBERT (literally any movie he reviewed could have been used there instead), and moreover the sentence structure is awkward, as if the wording had been contorted to put “Must” at the front. (not to mention the fact that a crossword typically does not repeat a word from the grid in the clues, although a relatively innocuous one like “must” is probably fine.) based on this idea, i also noticed {Some state employees} COPS at 1-across, since “some” is also part of our line. but EBERT and COPS didn’t do much for me, and i couldn’t find “rain” or “each” (or indeed, any of the other words in our line) in any clue.

what else can we do? ella (or perhaps allan roberts, the lyricist) borrowed the title of her song from longfellow’s poem the rainy day. could that be the thing to look at? why yes, it could. “into each life some rain must fall” is the most famous line of the poem, but it’s suggestively situated as the penultimate line. i say suggestively because now we have a pretty clear indication what to look for as the second line of our “please form two lines”: the last line of the poem, which is “some days must be dark and dreary”.

that’s also seven words, and wouldn’t you know it, “dreary” jumped out at me as a word i remembered seeing in the clues: {Dreary author} POE. and there’s the “some” and the “must” again, so probably COPS and EBERT are relevant after all. indeed, all seven of these words are used at the start of a clue:

the first letters of the answers to these clues spell out CHEER UP, which is our meta answer—and quite an apt one on this very rainy day here in boston. i hope it’s nicer out wherever you are reading this.

but enough about the weather! this is an absolutely brilliant meta. i’m struggling to even fathom how it came together so cleanly, because right now my working hypothesis is that matt time-traveled to 1842 and incepted (perhaps with hans zimmer’s assistance) longfellow into ending his poem with that couplet*: both lines seven words long, and the first line containing only four-letter words so that matt could start his trail of breadcrumbs there. not only that, but he then arranged it (either through ella or as part of some larger cultural awareness drive) so that the penultimate line, but not the final line, would become the best-known bit of that poem by the year 2021, so that he could hide the words of the final line in plain sight as the first words of seven different clues. and then (and then!), on top of all that, the answers to those seven clues acrostic into CHEER UP, which is an absolutely perfect capstone (and also the overall sentiment of longfellow’s poem). this is absolute sorcery.

hats off to matt for creating this work of genius and then sharing it with us. (and then hats back on, because otherwise my hair is going to get wet.) i hope you all enjoyed this one as much as i did!