I love Zhouqin’s puzzles! They’re always smooth and well-constructed. This is a perfect Monday puzzle – the theme is simple and consistent while not overly familiar, and the grid is just unusual enough to engage seasoned solvers (at least this seasoned solver) without stymying newbies.

There are four theme entries. The two Down entries are symmetrical and the two Across entries are centered. They’re all foods that end with colors. 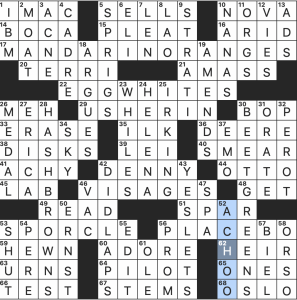 What I didn’t know before I did this puzzle: that there are twins on “The Simpsons” – Sherri and TERRI. 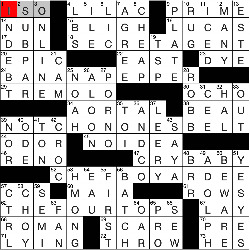 Andrea is a TOP constructor, so she went ahead and put some TOPS in this puzzle. Four of them, in fact. We’re back firmly in revealer-land, so let’s hop down to 62A [“I Can’t Help Myself” Motown group … and what’s comprised by 18-, 24-, 39-, and 52-Across’ starting words?], which is in fact THE FOUR TOPS. Also, that revealer clue. Whew! I’m out of breath just reading it, let alone trying to read it out loud. Would it really not be okay to just say [“I Can’t Help Myself” Motown group … and the theme of this puzzle]?

Anyhow…the first word in each theme phrase can be preceded by TOP to create a new phrase. Hence, THE FOUR TOPS: 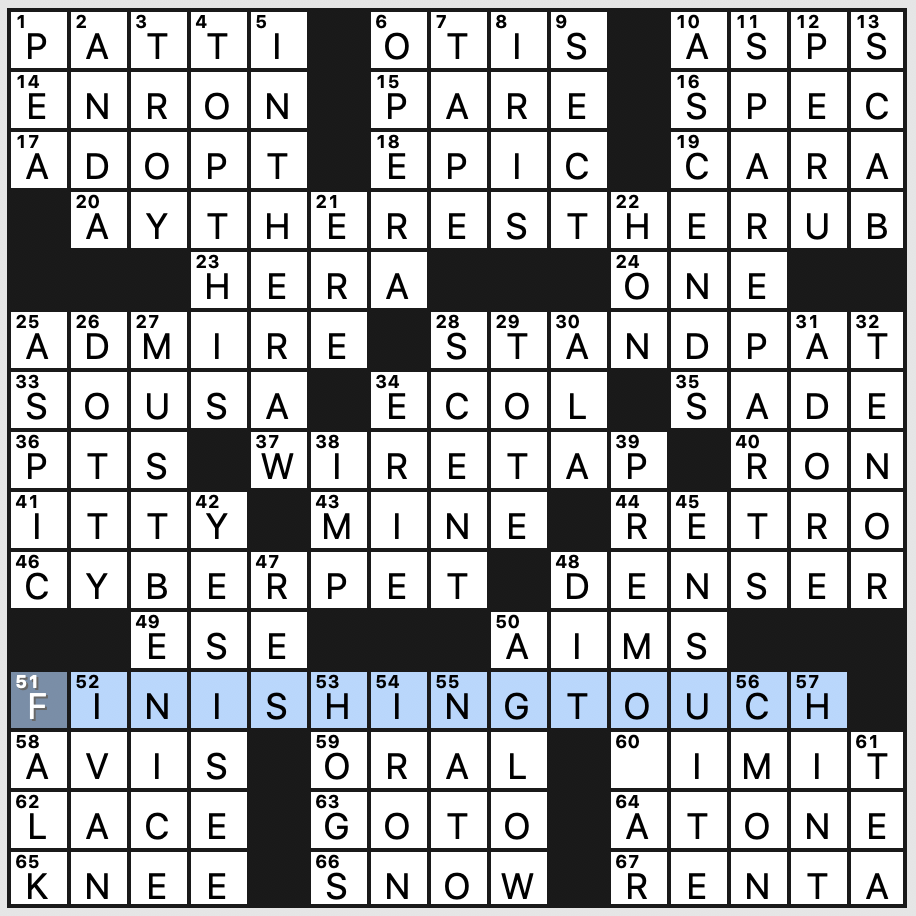 Nice theme. I don’t think I’ve seen it before and it works well.

In the fill, I love “MUST BE NICE” clued as [Words of envy]. SPARE PARTS, IN THE RAW, “TOP THIS!,” ENSUITE, and YES I SEE are strong as well. I’m not sure that I recall the term PREMOLAR, but it was easy enough to infer. Very nice long fill. My only grumble was weird-looking plural RES [Notes between dos and mis].

This was a really enjoyable Monday grid. Four stars. 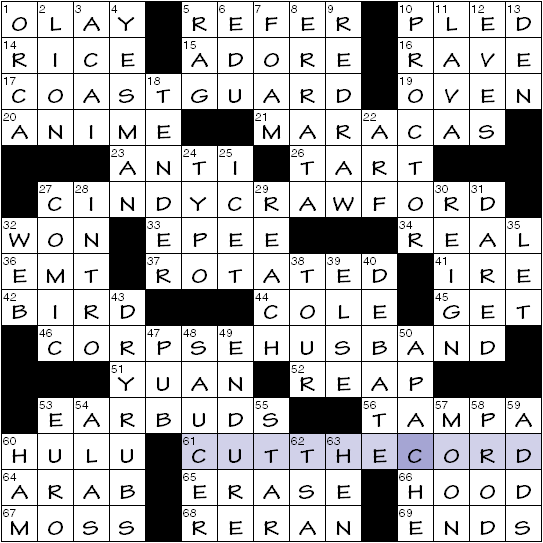 One revealer, three themers (hence the title). What elevates the theme a bit is how the three possibilities for dividing the tetragram CORD are represented—it really makes for a more satisfying product.

Both the fill and the cluing were gentle, making for a rapid solve. 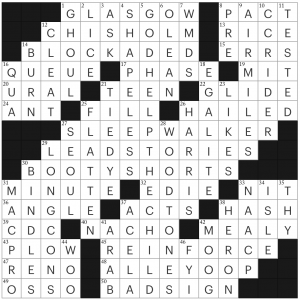 Hi everyone, late start today so just the quick hits!

Overall, no complaints and plenty of stars from me! See you Weds.

When 1a is a gimme, the puzzle feels easier, no matter how much I struggle with the other areas. I filled in the NW with no difficulty and then wandered around the grid for a while before I got enough toeholds to solve the whole thing – and my overall impression is still “on the easy side for a BEQ themeless.” As always, Brendan gives us some fresh fill to chew on. 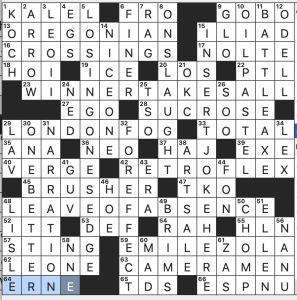 What I didn’t know before I did this puzzle: I’ve heard of EMILE ZOLA, of course, but did not know he wrote “Les Rougon-Macquart.” Looking up the English title didn’t help much.