Title: “After Three”
Prompt: The meta for this puzzle is a well-known singer-songwriter.
Answer: Olivia Newton-John 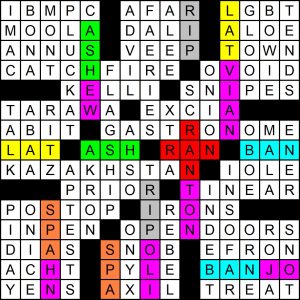 Solved and, as is becoming Pete’s signature style, the identities or even existence of theme entries was unclear. Spoiling the ending on this point: none of the longest four entries in the grid (CATCH FIRE, GASTRONOME, KAZAKHSTAN, OPEN DOORS) was theme. It’s hilarious how often he does this and I like it quite a lot.

With the word “Three” in the title I decided to check out the three-letter entries in the grid. Their placement and number were both suspicious: just six of them, very low for a 15×15, and four of them prominently across the center, as if he’s showcasing them. Hmm.

Things fell right away after that: the first of those four acrosses is LAT, and I saw LATVIAN in the grid; the next is ASH, which you can find at 5-Down in CASHEW, and then all the others were present as well. All six of them, in order by placement of the three-letter word in the grid:

Taking a cue from the title, you take not *all* the letters left over in each relevant grid entry, but only the ones that follow the three-letter word ensconced therein. These yield OLIVIA NEWTON-JOHN, relevant since she’s one of those three-name people (well, the surname is hyphenated, but same idea).

This is a nice meta. Not easy at all to get OLIVIA NEWTON-JOHN to appear in sequence like that. Fell quickly for me but with just 236 right answers just before deadline it clearly played tricky for many solvers. 4.65 stars.