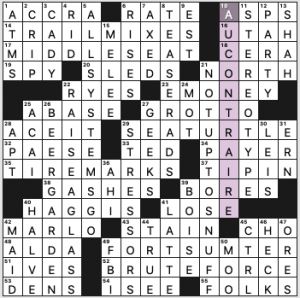 Whooooosh! This was too easy, if you ask me. The super-speedsters probably finished this puzzle in under two minutes. I do like a challenge, but this puzzle was smooth and clean, a delight to solve.

Fave fill: SEA TURTLE, TIRE MARKS (liked the misleading clue, [Leftovers from a doughnut, say]), BRUTE FORCE, BEER GARDEN (I filled in B*ERGAR*EN at first, unsure of whether it might be the German BIERGARTEN), RAISE A GLASS, “ALL SYSTEMS GO,” and NOT UP TO SNUFF.

The only thing that gave me pause was EMONEY, 23a. [Ethereum or Bitcoin, for example]. How common is that term rather than cryptocurrency? Also, never heard of Ethereum. 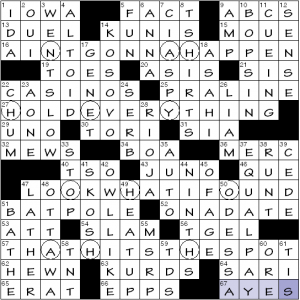 The four long acrosses are themers, and they share identical clues: [Exclamation clued by its circled letters]. Each set of circled letters is a three-letter word, also an exclamation.

This crossword had a few tricky spots and took me noticeably longer than the very easy Friday NYT offering. Mostly due to vagueness in the cluing, which is a legitimate way to make a puzzle more difficult.

(All sounds in this piece are recordings of the composer’s studio door.)

Theme: Famous women whose surnames can also be a sporting venue. 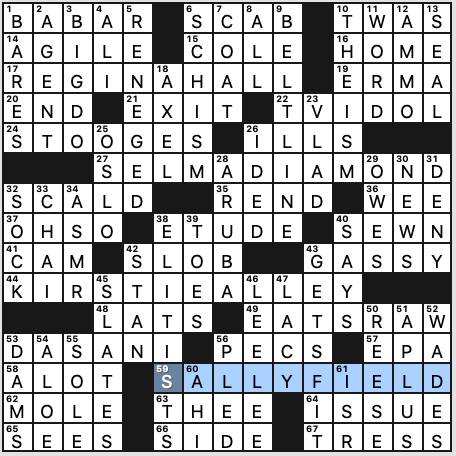 An okay theme, but when you only recognize half the names, it’s just not as fun. And it’s just an odd concept, as if “women’s sports venues” was actually a thing. (See r/pointlesslygendered.) And why does having the last name of a venue make you a star of that sport. Why not clue it [Soccer venue named for a “Lincoln” actress?], etc.? That would make more sense to me since the title of the puzzle refers to venues.

The long fill is solid but not especially sparkly: BELTLINE, ELITISTS, GETS FIT, and RENEGED. I liked seeing actress LEELEE Sobieski in the mix; I don’t think I’ve seen her name in a grid before.

The basis of the theme is fine, but little things about its execution irked me. 3.3 stars. 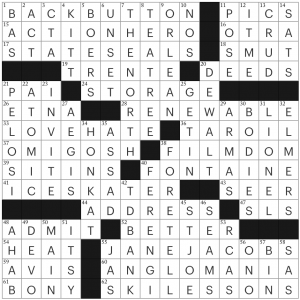 Happy Friday, folks! Although I must admit, today’s puzzle did not feel like a New Yorker Friday to me— the abundance of proper nouns (especially in the SE!) made this one a real challenge for me, to the point where my only recourse was google. Not a great feeling!

I liked the stack in the NW (BACK BUTTON / ACTION HERO / STATE SEALS) and the other longish entries LOVE HATE, ICE SKATER, and SKI LESSONS. The grid is hyper segmented, with only two squares connecting the NE and SW halves , and the actual NE and SW corners are even more closed off. This made for a somewhat choppy solving experience, and made having so many unfamiliar propers in the SE reallllly challenging for me. Specifically, I didn’t know and could not infer the crossings at  JANE JACOBS/JAS, JANE JACOBS/FERENGI, JANE JACOBS/SAS, JANE JACOBS/ST JOE, FERENGI/FONTAINE, or FONTAINE/DEWALT. If I had had 1-2 more of the downs through JANE JACOBS, the rest of the letters probably would have been guessable, but guessing DAS instead of JAS and ST LOE instead of ST JOE made the letter pattern of JANE JACOBS downright inscrutable. Oof.

Overall, not my favorite New Yorker solving experience in recent memory!  See you all next week.

Here’s the grid. We have phrases that contain the names of trees, clued literally with the scientific names of said trees. 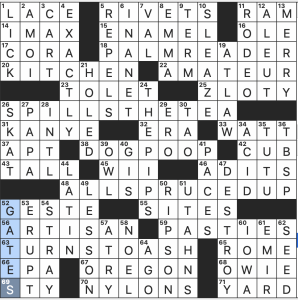