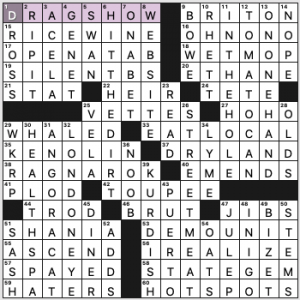 Has it been a long week for me or was this one harder than other recent Saturday NYTs?

Nice fill not mentioned above: EAT LOCAL, RAGNAROK, HIT THE DIRT, LONDON EYE, and (eww) STREET MEAT. No problem with buying food from a halal cart on the streets of NYC, but STREET MEAT is a kinda gross term. 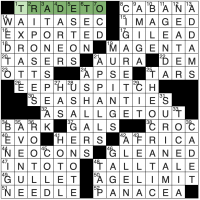 We have another new byline this week to the database. Is this a pseudonym of some sort, or another new constructor? Or just a constructor I don’t know? This is a pretty good themeless puzzle, especially with the nice stack of 11’s right in the middle. Some of the fill isn’t the greatest (see comments below), but I know how hard these are to make. A little tougher than normal, but I didn’t have a quiet place to solve this either. I am still going to reserve harsh judgment until I have my own puzzle in the LAT on a Saturday! One of these days. In the meantime, whoever made this puzzle, I am looking forward to what else is produced from them. 4.2 stars from me.

I think a new Panda Magazine comes out today. There goes my Saturday … 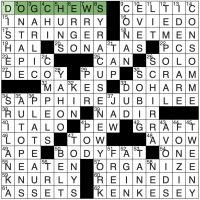 No “Anna Stiga” pen name anymore? That’s fine with me. Go ahead and take full credit, Stan! This was a thorny one in spots. I found the SE corner easy to break into, and I finished in the SW. Not even sure what 35-Down is. (See below!) All in all, Finished in a shade under 15 minutes, which isn’t bad. Been tired this week; I need a vacation BADLY!! But nice puzzle Stan. 4.5 stars from me!

Everyone have a safe and healthy weekend! It’s almost over! (I hope!!)

THEME: Types of cake can be found hidden upwards in the middle of common phrases. 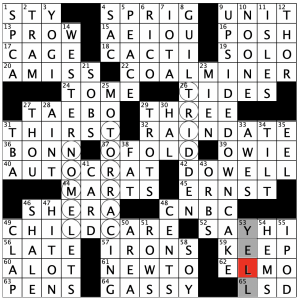 I come from a family of cake lovers. We find any excuse possible to eat cake. Nephew lost a tooth? Cake. Sister has a 1/2 birthday? Cake. Niece made it through the day without a violent temper tantrum? Cake.

Love me a LEMON cake! Though I’m not sure it would go well in a WESTERN OMELET (how do you spell OMELET? That’s the way I do…) I never quite understood the draw to CARROT cake. Too heavy! And DIRT cake- that’s the one with Oreos, right? Pretty sure. That is definitely the least familiar of the three for me though.

Everything about the puzzle was just fine. Standard solve. Paul Coulter’s Universal constructions are always reliable in the sense that you can depend on a clear, consistent theme and fair fill.

I was able to see the words LEMON, CARROT, and DIRT in that order and wonder what was tying them together because I was solving in Across Lite, where Universal utilizes the common practice of circling letters.  This kept the puzzle engaging for me.  However, most people who solve Universal puzzles are unable to access that simple feature (Universal is unable to publish circled-letter themes) and instead have to interpret clues like this in the first themer (solving west to east):

What does that mean? How can a novice solver be expected to interpret that? It’s the first themer to appear left to right in the puzzle!

You would have to wait until you get to the clue in the third themer (I would call it third since it’s the one next to the  revealer, which is typically last) for a *hint* as to what those numbers mean:

[Suffering severe remorse (see letters 8 to 5 in this answer)]

So the puzzle is directing the solver, in the third themer and in a very unclear way, to mentally circle and read letters backwards. Instead of circling them for the solver.

I don’t understand why Universal is willing to publish subpar versions of its puzzles with directions like these. It’s constant. Last week, in a span of 8 days (Monday to Monday), there were 5 puzzles that featured (or should’ve featured) circled letters. The fact that it’s available on this site and appears how it should appear seems to be a direct acknowledgement that there’s a problem with the version offered to the masses.

Thanks for this one, Paul! Sorry this one fell victim to the circle “workaround.” 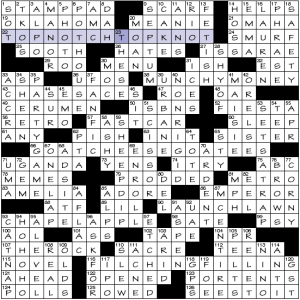 Reduplicative phrases in which the first iteration has a voiceless postalveolar affricate (tʃ) introduced—that’s a ‘ch’ sound to you and me—to wacky effect.

These are … ok. I’m not going to be the one punching punning. In a nice touch, that voiceless postalveolar affricate does not appear elsewhere in the grid.