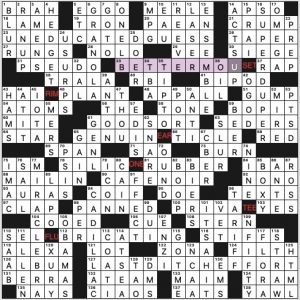 Okay, I absolutely did not see the connection between the words hidden in the black squares till after finishing up. Various words that can precede shot are what’s hiding, sort of rebus style, with theme answers crossing that black (“the dark”) rebus box.

Interesting theme concept, though I didn’t find it particularly engaging to solve.

Each theme answer has BR added to a phrase. It’s cheaper than building a new room, especially these days… 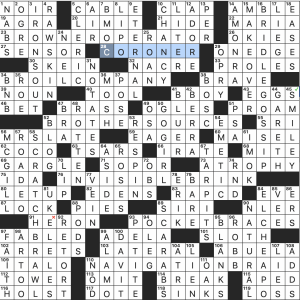 The theme is solid and consistent. I like the way the BR insertion moves from the first word to the second in the bottom half of the grid.

Whoops! Computer battery is low and I’m too lazy to go look for the power cord, so that’s it for me except for what I didn’t know before I did this puzzle: that the CORONER on CSI is Dr. Al Robbins.

THEME: Common phrases reimagined as if they’re something related to a group of animals 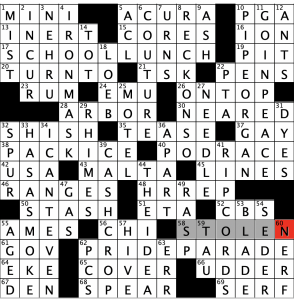 This is very over-the-plate for an Eaton-Salners puzzle. I usually brace myself for something out-of-the-norm when I open one of those. Interesting construction too with both of the central themers occupying the same row. Plenty of room for other longer entries in the fill like HAS A SMOKE, I CAN’T EVEN!, IRON MASK (is that a partial? Dunno. It’s kinda clued like one), CASH CROP, RECKON SO, RIP CORDS, PIPE ORGAN, and GO IN PEACE, all of which are longer than two of the themers. Yet somehow, the theme still shines through. Nicely done.

Least favorite fill = SHISH. I kinda like the funkiness of the letter combos for HR REP in the grid.

Two. metas in a row! That’s sure to delight some solvers (I’m in that crowd) and miff some others. Both took a little elbow grease too; The answer wasn’t immediately apparent in either. 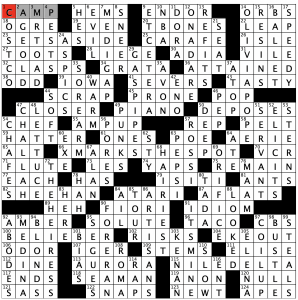 THEME: The instructions tell us we’re looking for the name of a birthstone in the grid.

Well, I’ll be darned. There seems to be only one.

Right in the middle of the grid we have

[Hint that you must use several times to find the hidden gem in this puzzle’s grid] X MARKS THE SPOT.

This must be the fourth or fifth time I’ve seen that phrase used as a themer in a puzzle. More than once it’s been in a meta puzzle. But this time, the grid is devoid of extraneous X’s. None in the clues either. I’m sure that was intentional on Evan’s part as to not send the solver down a deep rabbit hole.

So then what is it?

I confess, it took me a while to see it, and I put in a lot more thought into uncovering this week’s answer than I did last week’s.

One of the best ways that I’ve found to solve a meta that you’re stuck on is to simply re-solve the puzzle. Slower. Paying closer attention to the clues and the entries. Re-solving also serves as a reminder of things that bothered you the first time that you may have forgotten about. 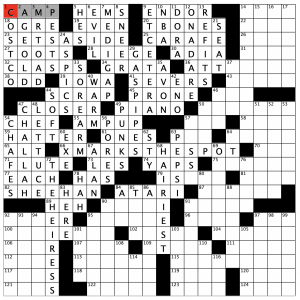 That last one did the trick for me. Two things stuck out as odd during my first solve. They just weren’t big enough at the moment for me to slow down. However, during my second solve, you can see in the screenshot where I stopped when I’d realized I’d hit upon something:

In the west of the grid slightly south of the center, there is an awful crossing. HAH and HEH to be specific. And they’re also in amongst an unfamiliar name (to me) SHEEHAN and an unfamiliar title (to me) THE HEIRESS. What’s up with that? Why so many… H’s….. in an X formation. Aha.

I was then reminded of the POPE / POP crossing which I had also noticed during the first solve, which isn’t bad at all… just odd. And look at that. The P’s up there are also in an X formation. That’s a solid meta “click.”

See the below grid (courtesy of Evan) for all the other letters that can be found in an X formation: 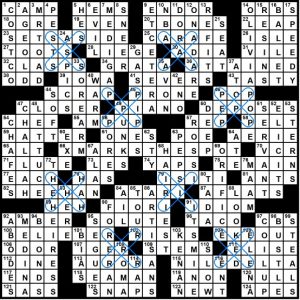 Of course, they spell out the meta answer: SAPPHIRE.

I liked this one a lot. A very satisfying click, which is the sign of a strong meta. In some of Evan’s other metas, there is frequently an apparent theme of sorts (like last week’s in a way), so even a non-meta fan can enjoy it. This one doesn’t really have that, so it’s either solve it as a themeless, or dive in. Unfortunately, that’s an indication that it will receive poor ratings here simply because it is a meta-puzzle. Ah well. At least I am confident that that won’t deter Evan from constructing metas in the future. 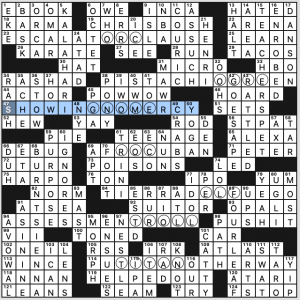 Universal Sunday crossword solution · “Fantastic Beings and Where to Find Them” · Paul Coulter · 5.16.21

I enjoyed this despite a couple new-to-me terms. I just don’t understand why the puzzle isn’t titled “Fantastic Beasts and Where to Find Them.” I guess because you wouldn’t consider a TITAN a beast? I could look the other way on that one.

The puzzle has remarkably clean fill. I was expecting it to get sloggy, but Paul keeps it fresh with interesting long entries in both directions. I don’t know CHRIS BOSH, but I’m sure plenty of people do, and the crossings are all fair. But otherwise there’s TEACHER’S PET, KALAHARI, BURNT SIENNA, FOUR-LEAF, GOES APE, HELPED OUT, and a bunch of nice 6s and 7s (I especially liked seeing POWWOW).

Simple theme that was still fun to uncover. Lovely fill all around. Four stars.