This month, we are asked, “What grid entry is hinted at by the theme of this puzzle?”

There are six starred themers: 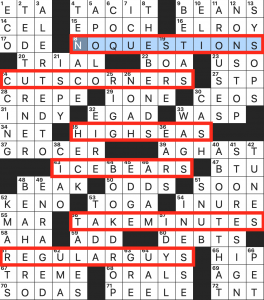 I jumped in the right rabbit hole fairly quickly: I noticed each themer had two words, wrote each word separately, looked for patterns, and identified the following “opening numbers”:

Then I missed the meta forest for the trees, ignored the obvious next step, and tried to map each number back to the grid, resulting in the nonsense string “TTIADA.” Other fruitless rabbit pursuits followed, so I used the time-honored technique of putting the meta aside for awhile and getting a coffee.

The aha!/DUH! moment hit me when I returned: 24/7/365. I rescanned the grid and found NONSTOP (12d), our meta solution. We’ll stop now with the happiest song of all time, which stalled at 86 on the United States Billboard singles chart when it was released in 1979. Defying the laws of gravity: it refused to die and has become a massive hit.