This week we’re told, The answer to this week’s contest crossword is an eight-letter word. There are seven starred themers:

Noting the title, I spotted this entry:

My initial hunch was that this was a “trace a path on the grid” meta, starting at “square one.” Fruitless attempts to find the path followed. I tried pulling the compass direction letters from each themer, for example: DRSEUSS (SE, S, S), SLURRED (S, E), etc. Finding gibberish, I tried Up, Down, Left, Right (DRSEUSS contains D, R, and U). Using these body relative (aka egocentric) coordinates revealed more gibberish.

I punted and went to bed. Checking my notes in the morning: the themers used a constrained set of letters, with lots of D’s, E’s, and S’s. Protip: if you solve using .PUZ format: check out mechapuzzle. Among other great features: it provides a frequency analysis of each grid letter. 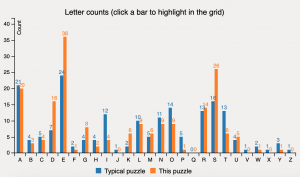 Frequency analysis often is irrelevant to solving a meta, but it’s sometimes helpful (so it never hurts to check). In this case frequency analysis confirmed that there were far more D’s, E’s, and S’s in the grid than normal, which seemed relevant since the themers were responsible for that skew. Convinced I had the right rabbit hole (with the wrong execution): I doubled down on tracing a path. My “aha” moment came when I realized that each themer was exclusively comprised of the eight compass and body relative letters: NSEW, UDRL. In reference to a crossword grid: up and north are synonyms; same for down and south, etc. Tracing a path that begins in the North West (Upper Left) corner meant South East (Down Right) would probably feature prominently, explaining the skewed letter frequency. 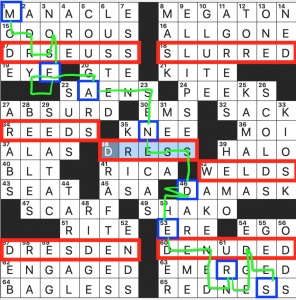 This insight allowed me to locate the trail. Starting at 1a (“M”), I followed the directions in DRSEUSS and went Down Right,  South, East, Up, South and South, ending at “E.” I then followed SLURRED’s directions, going South, Left, Up, Right, Right, East and Down, ending at “A.” Continuing that process revealed MEANDERS, our meta solution.

This is a truly impressive feat of construction by Mike: there is a lot going on in that grid. I was convinced I had the right idea and struggled to find the proper execution, resulting in a great “aha” moment when I finally did. My mistake was assuming that compass and body relative letters were mutually exclusive. I find it interesting how we invent imaginary meta rules and then struggle (and sometimes fail) to solve the meta as a result.

I’ll leave you where we started: on Square One.