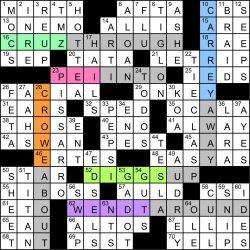 Hello everyone! The temperatures are on the rise in most areas and am hoping that many of you are enjoying the better weather AND are still being cautious in relations to responsible mask-wearing and stopping the spread of COVID-19.

It’s fun with homophones in today’s puzzle, and with a little twist. Common phrases are altered when one of the words in the phrase is replaced by a homophone that also happens to be the last name of an actor/actress.

Apparently, the portmanteau TIGLON has been around since the 1920s, but this is the first time I’m ever coming across it (8D: [Hybrid cat in the wild]). Liked seeing PISSARRO in the grid as I remember having to study some Impressionist works in college way back when (23D: [“Bather in the Woods” painter Camille]). My mom has been wanting me to buy her puff pastries so she can make some beef patties/meat pies, but next to the puff pastries in the frozen section. is phyllo dough, and seeing the clue and entry for FETA definitely makes me want to try my hands at making spanakopita (26D: [Cheese in a spanakopita recipe]). Savory bread, spinach, cheese, maybe some baked chicken as the main dish. Oh, that sounds good!

“Sports will make you smarter” moment of the day: OLE (64D: [Flamenco performance cry]) – In just over a week, the final of the Europa League, a secondary yet prestigious competition and tournament featuring some of the best soccer teams in the continent, will be staged in Gdansk, Poland, and one of the teams in the final, Manchester United, will be coached by a former player and legend, Ole Gunnar Solskjaer. Why is he a legend? Well, in a European final 21 years ago, Solskjaer, who came onto the game as a substitute, scored the winning goal in extra time to give Manchester United a 2-1 victory over Bayern München in the 1999 UEFA Champions League final held in Barcelona. (Both of United’s goals in the famous fixture came in extra time, adding to the lore of one of the greatest soccer games played in recent memory.) Now, Solskjaer has a chance for European glory as a manager as well as a player for the Red Devils.

Theme: Entries include words that are anagrams of BEAR. The revealer at 60a is BUILD-A-BEAR [Customizable toy franchise, and what a part of each starred answer can do]. 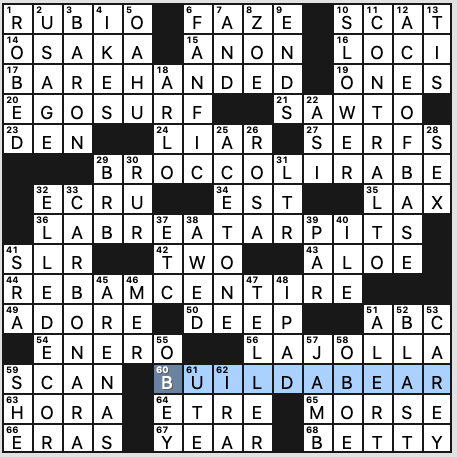 When I grokked the revealer I was expecting to go back and find a progressive set of theme entries that included B, BE, BEA, and finally BEAR. But that’s a different theme. I wasn’t expecting anagrams in a “building” theme, but I guess it works, because I can imagine setting out to build a BEAR and having all the parts available to me, just in a random order. The cluing on the revealer is odd, though; I don’t expect the theme answer to do the actual building. A clue like [Customizable toy franchise, and what you can do with a part of each starred answer] makes more sense to me.

Fill highlights include CONTRALTO, CARBONARA, and ACE OF BASE [Swedish group with the 1994 #1 hit “The Sign”]. I don’t know the magazine ELLE DECOR, but the clue was very helpful [Hearst magazine focused on interiors]. EGO SURF, FANFIC, and LA JOLLA (even though it dupes the LA from a theme answer) are other goodies.

I didn’t spot any clues I needed to note, so I will leave it there. This is a solidly constructed anagram theme with strong long fill. 3.7 stars. Enjoy “The Sign,” if that’s what you’re into. 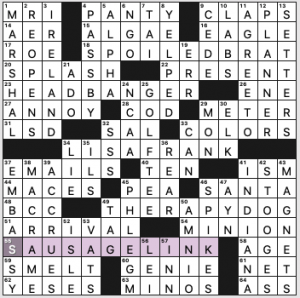 Whew, am I glad Adesina publishes the Tuesday posts on Monday evenings because I entirely forgot about blogging (TV with the family, then we got sucked into watching Freedom Writers with Hilary Swank) and it’s almost 1 a.m. Quickly, then: Theme revealer is 55a. [Breakfast side order … or a hint to the last words of 18-, 23-, 34- and 49-Across], SAUSAGE LINK, and those themers are SPOILED BRAT (as in bratwurst), HEADBANGER (as in bangers and mash), LISA FRANK (frankfurter), and THERAPY DOG (hot dog, aka frankfurter). I’d have liked to see NAIL POLISH sneaking in a Polish sausage, but it’s not pronounced the same so it would be an outlier here. Though actually, the sausage BRAT has an “ah” sound distinct from the misbehaving BRAT, so … nix one of the 10s and swap in NAIL POLISH and Bob’s your uncle. 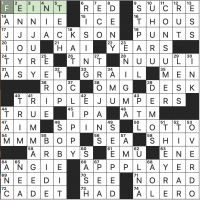 I wonder if this week’s Jonesin’ was inspired by the upcoming Olympics that they will likely cancel? We have four theme answers, and a revealer in the middle:

I am fairly sure a couple of these had verrrrry limited options, especially the triple U! As is usually the case, the brainstorming session here must have been quite a feat! But to turn this into a puzzle with extremely clean fill is amazing. The UHURU/NUUULI crossing was a little tough until you realize what is happening in the theme. A solid 4.7 stars from me!

Another Jonesin’ next week! We are close to a day off at the end of the month! 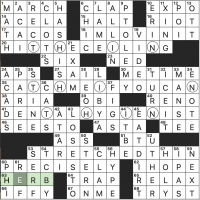 I didn’t even notice what was going on until I got the the very end. I keep trying to speed solve these, but I can never get under 3 minutes. I don’t know how these people solve easier puzzles in under two minutes. I am just not that fast! But this is a clean execution of a clever theme, yet easy enough for an early week edition.

Please have a safe and healthy week!

THEME: I’m honestly not too sure… Metals whose symbols can be found in common phrases? I feel like I’m missing something… 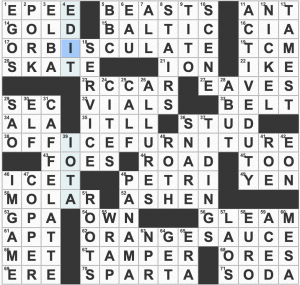 I have to be missing something in the theme. I see that the symbols for the three metals are in there, but in what sense can they be “mined” from the entries? If they are lifted out, the resulting entries don’t make any sense.

I like the clue for OFFICE FURNITURE [Tables at a meeting, say?], but I was confused as to whether the punniness would be playing a part in the theme. The word ORBISCULATE is completely new to me (and I already love it… it’s up there with my other favorite: Defenestrate), and for a second I thought that it was a made up word that had something to do with the theme. Wrong on both accounts. Could it just be that the letters AU, NI, and CU are in a phrase? I’m assuming there are a lot of phrases where you’d find those letter combos, so what makes these three phrases special?

I’ll hold off on obeying the puzzle’s request in the title as I am almost certain something is over my head here.

UPDATE FROM COMMENTS: *Jim, there’s a revealer at 68 ORES – Rocks that 17, 38, & 62 Across represent, based on their outer letters. These are ORE each time. So we are extracting metal from surrounding ore.*

Thanks for the push in the right direction, Paul. I missed the revealer clue/answer entirely. That makes a lot more sense now and is much more satisying. It also explains that choice of themers since they have the restriction or O * [metal] * RE or OR * [metal] * E.