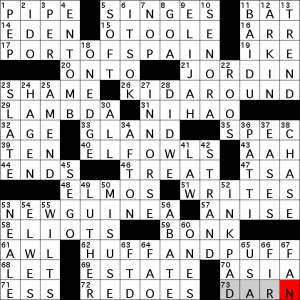 hello and welcome to episode #676 of matt gaffney’s weekly crossword contest, “Man Seeking Woman”. for this week 2 puzzle, the instructions tell us that we are looking for an Oscar-winning actress of the 1970s. okay. what are the theme answers? five long across answers have *ed clues:

what do all these have in common? nothing, as far as i can tell. but i rather suspect that there are more theme answers than this, because there are five different down clues that look relevant:

it’s interesting, given the title of the puzzle, that four of these actors are men and uta HAGEN is a woman. i don’t know what to do with that, though. i was also struck by the parallel construction of these five clues, in which all five first names were omitted, so perhaps we’re supposed to do something with the first names. or perhaps each of these five actors co-starred with the meta answer in a different film? that seems possible, but a) it would require a lot of research to figure that out, and b) i don’t know what the *ed clues would be doing if that’s the mechanism.

ELWES and ELF OWLS share a lot of letters in common—everything but the second E of ELWES is there, in order. but that’s also the only themer that contains two of the three letters of LAW, and none of them have four of the five letters of CHASE.

perhaps we’re supposed to find one actor who fits all five of those extra clues? that would explain why, for example, jude LAW is clued via a movie i’ve never heard of and cary ELWES via a movie i had no idea he was in. anyway, that would be cute, but it looks like there isn’t any actor in all five. i will say that when i think “grosse pointe blank actor”, alan arkin isn’t the first name that occurs to me; of course, that’s john cusack, with minnie driver and joan cusack next. and reversal of fortune is jeremy irons and glenn close. there are a lot of approximately equally famous members of the original SNL cast. i don’t know the film closer, but it appears to star julia roberts, natalie portman, and clive owen in addition to jude law. days of thunder is primarily a tom cruise vehicle (see what i did there), with nicole kidman and robert duvall also starring.

oh hey, this is something—i believe all four of those films have an oscar-nominated actress in them, though not for that film: both joan cusack and minnie driver in grosse pointe blank, close in reversal of fortune, roberts and portman in closer, and kidman in days of thunder. oh hey, KIDman and PORTman, that seems relevant! in fact, that must be what is going on, given the title, so … it doesn’t have anything to do with joan cusack or minnie driver, or for that matter the aptly named glenn close, who has been nominated for eight oscars but never won.

jenna ELFman is also in grosse point blank (i did not remember that). laraine NEWman was in the original SNL cast, and felicity HUFFman was in reversal of fortune. so that explains the across theme answers. now let’s see if we can put this all together:

the surnames at the ends of these chains acrostic to LEACH, indicating the celebrated actress CLORIS LEACHMAN. i know her better for her small-screen career (a record-sharing 8 wins from a record 22 nominations for primetime emmy acting awards), but she won the oscar for best supporting actress for the last picture show (1971).

whew, that was a workout. it was all there and gettable, but it felt a lot harder than a week 2 for me, both because there were many steps, and because the key step was not really accessible to me without a large amount of research. i thought i knew who the relevant cast members were in (e.g.) grosse pointe blank and reversal of fortune, but i didn’t. only nicole KIDman in days of thunder was in my knowledge banks at the start of the weekend, and maybe that should have been enough to trigger the “aha” for me, but it wasn’t. the title really didn’t help me until after i’d had the aha, since it put me on the track of actors who co-starred with relevant actresses.

but hey, at least i got there, and it’s actually a really cool meta—just more complicated than anything i was looking for in a week 2. hope you enjoyed it as much as i did!