Theme: Phrases whose last word can be a synonym for “dwelling.” 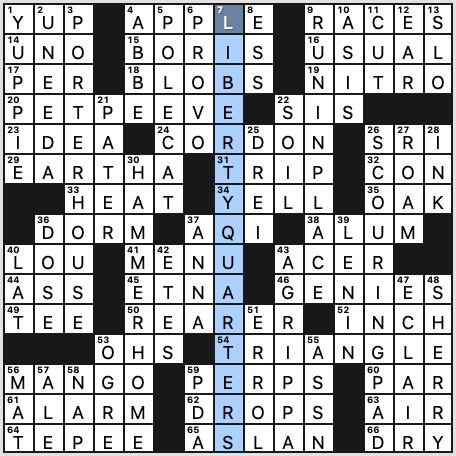 I couldn’t get excited about this. Too many little foibles for me, and some of these were just too on the nose.

Some of the long fill is quite nice (POLECAT, PET PEEVE, TRIANGLE, AGRIPPA), but there were too many distracting gluey bits (UNEEDA, AQI crossing DREI, REARER, ETES, ABBE, SRI). I for one didn’t know UNEEDA and that first letter crossed Y_P [“You betcha!”]. An E seemed almost as likely as the U there.

Various issues kept me from enjoying this grid. Three stars. 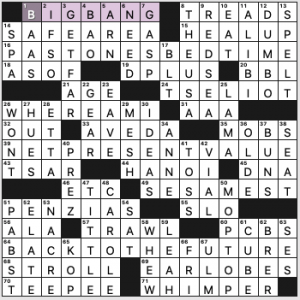 This is just another one of those “poetry meets physics” crossword themes—they’re a dime a dozen, aren’t they? What’s that you say? You don’t think you’ve seen a physics/poetry mashup in a puzzle theme before> Here’s what Ashish brings us:

And then there are the PAST, PRESENT, and FUTURE progressing through three 15s:

Awfully scholarly for a Wednesday puzzle! And I don’t quite grasp why PRESENT is incorporated into the theme structure. Just a “You Are Here” bit?

With 73 theme squares, things do get a mite crowded, and we get lots of stuff like NACRE, ARN, KOP, SES, SLO, BBL, BAAS, and whatnot. 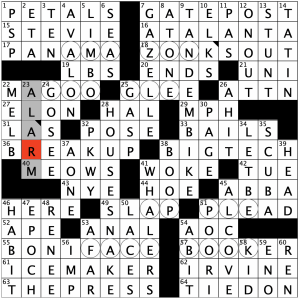 This week’s AVCX is a guest puzzle from Malaika Handa, and 36A/38A explains all of what’s going on:

This affects AMAZON spread across PANAMA (“Site of a canal that did NOT have a giant ship lodged in it for several days”) and ZONKS OUT (“Falls asleep”), GOOGLE between MAGOO (“Nearsighted Jim Backus cartoon character”) and GLEE (“TV show that featured the Warblers and Vocal Adrenaline”), APPLE in SLAP (“Play with the knuckle, as strings on a bass guitar”) and PLEAD (“Get on one’s knees, maybe”), and FACEBOOK between BONIFACE (“Name for nine popes”) and BOOKER (“Cory, partner of Rosario Dawson”).  It’s a cute theme, and as soon as I had the revealer, I was easily able to fill in the circled squares. 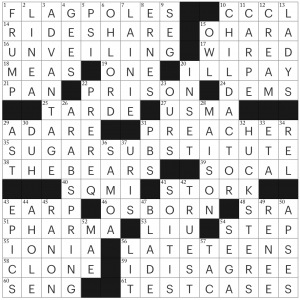 Good morning! My aunt texted me a picture of a camel this morning so I guess that means it’s Wednesday! Let’s talk about the New Yorker puzzle.

Although there were parts of this puzzle I very much enjoyed, on the whole it left me a little cold. The spanner SUGAR SUBSTITUTE isn’t exactly exciting, and with the clue [Sweet freebie at a coffee bar], I almost felt a little ripped off? Like if I saw a sign outside a coffee shop that said “Sweet freebies inside!” and then the barista was like “…yeah, it’s the Splenda packets,” I’d never go back to that coffee shop again! False advertising on the sweet freebie, for sure. I did enjoy most of the other long entries, particularly:  RIDE-SHARE / UNVEILING / LATE TEENS / I DISAGREE / ARAB SPRING / CHILD ACTOR / ADVANTAGE / HUCKSTERS. I don’t think I knew that HUCKSTERS just meant “people who huck things”– for some reason I thought there was some element of a scam involved. I guess many infomericals *are* scams, so maybe I wasn’t wrong?

The fill today was pretty hit-or-miss. I liked some of the short fill (DUH, PAN-, MAE), but a lot of it I could definitely live without. In particular, CCCL / MEAS / AST / SQ MI / REL / TAC / SEG / ERNES / LINE A are all pretty icky, and I’m not convinced that SUGAR SUBSTITUTE and a couple neat corners was worth it.

Overall, not my favorite, but a decent start to the morning nonetheless! See you Friday.

P.S. Claire Rimkus and I have started an independent crossword blog called “Just Gridding!” where we will be publishing our own puzzles on a regular (or semi-regular) basis, as well as the occasional “just gridding,” which will be  just a grid that we will crowdsource the clues for. We’ve got one puzzle each up so far– check them out here and here! 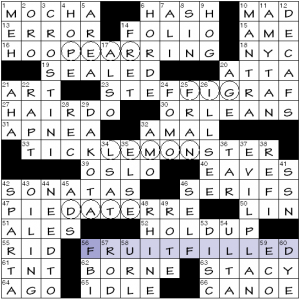 Nothing fancy about the title this time around. ALSO, there’s a clear revealer: 56a [Like many strudels, or the starred answers?] FRUIT FILLED. And we get starred entries, and circled squares. Nothing left to chance here.

Pear, fig, lemon, date. All are legitimate strudel fillings. Good consistency in that each of the fruits spans one or more words in the entries. Is there grid art suggesting a strudel’s stretched surface, revealing its filling? Open to debate, but I think not. 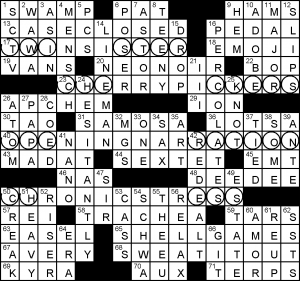 From the get-go we can see this quite a busy theme. The entries with circled parts plus the final ten come to 62 squares: 10/13/16/13/10. The theme is SHELLGAMES, and each of four sets of circles surround their answers and spell out a board game (considered loosely). The set of entries that contain them were a little dry: TWINSISTER, CHERRYPICKERS, OPENINGNARRATION, and CHRONICSTRESS; but this is understandable given the large words spelt out by the circles!

I was very impressed with the design of the top-left and bottom-right stacks. Both have two theme entries plus a second pair of tens and a pretty open style. I imagine the “painting in” of the grid start there with CASECLOSED and SWEATITOUT. The top stack also has MENSCH and NEONOIR with the bottom a little more difficult to balance, resorting in a right-most SSTS to hold it all together.