Theme: Familiar-ish phrases whose first word is a number which is double the number found in the circled letters of said phrases. These first words are DOUBLE HEADERS according to 61a [Ballpark events, or what 17-, 31- and 48-Across all have]. 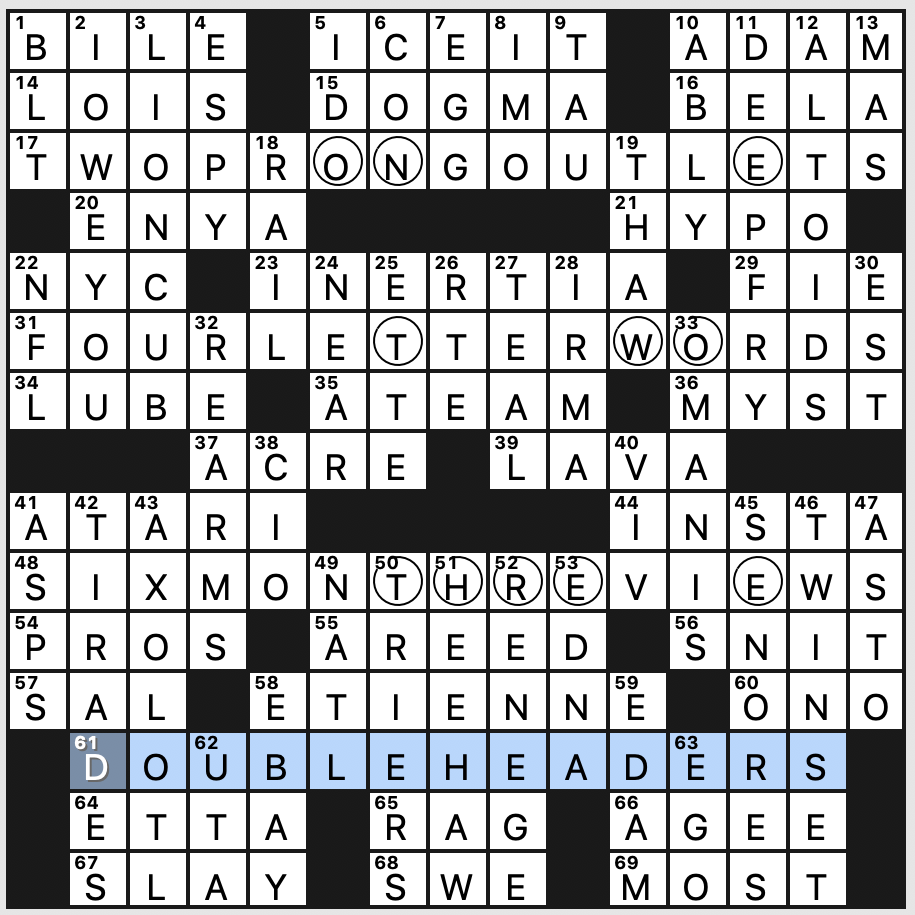 I liked this. I wasn’t paying attention to the theme until about 2/3 of the way through the solve, then I looked up and had a nice aha moment.

Interesting construction with left/right symmetry and with the constructor choosing to go with all grid-spanning theme entries. I also appreciate the numerical progression as the solver works their way down the grid.

There are a lot of constraints here, including the sheer amount of theme material. And that’s why I’m surprised there’s not more gunky bits in the fill. There’s even some fun stuff: “I OWE YOU,” LION CUB, DEEP FRY, ALTOIDS, AXOLOTL (all of these crossing two theme entries!), and INERTIA. I’d maybe try to cut out TWIN SET since it feels theme-adjacent, but it also is crossing two theme entries, so the choices must have been limited.

The only place I winced was with TRIERS [Judges and juries]. Ouch. That second R was my last letter to go in the grid, and I was mildly surprised that it was correct. But given how difficult this grid must have been to fill, and how clean the rest of the grid feels, I can get over it. 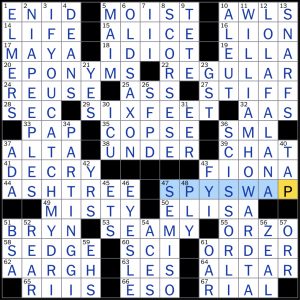 It’s so rare that you see a theme that relies on the down clues rather than the acrosses, so it was delightful to get an AHA moment when working on the downs of Trenton Charlson’s latest for the NYT:

Each of the theme phrases are just a little too long for the grid – all six of their respective FTs (IF YOU CATCH MY DRIFT, WILLIAM HOWARD TAFT, PARTING GIFT, SCISSOR LIFT, EYES LEFT, SEMI-SOFT) all end up UNDER the grid.

Regular crossword entrant and singer SIA got her first major burst of US fame from the song “Breathe Me”‘s appearance in the Six Feet Under finale!

other fill of note: EPONYMS! FIONA Apple, SPY SWAP (is this a thing?  no, seriously, is this a thing?), NIA PEEPLES, OLD SAXON, SCORSESE, and LOLA FALANA 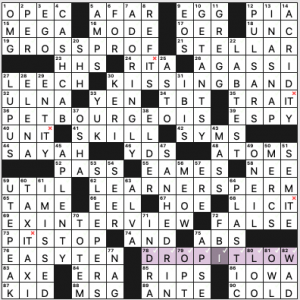 Hello! It’s Amy filling in for Jenni this week. Chandi’s Fireball puzzle is a plus-sized 17×17 with a 16-piece theme. The revealer is 78a. [Misogynistic song with the lyric “Girl I like the way your booty, booty, booty popped” … and a hint to this puzzle’s theme], “DROP IT LOW.” I don’t know the song, but the letter pair IT gets “dropped low” from five familiar phrases, and you’ll find that IT dangling beneath the letter it should follow, and each IT is in a two-way rebus square:

Editor Peter Gordon tends to be more artisanal than some of the newspaper crossword editors, so Fireball puzzles typically have smooth and interesting fill, generally low on the “I can’t believe this stale, old entry is in here in 2021” scale. Highlights in the fill include an EASY TEN in craps (6-4 or 4-6 twice as likely to be rolled as 5-5, yes? is my probability math right?), CASH CAB, the SANHEDRIN, and a LAB TEST (22d. [CBC, e.g.] refers to a complete blood cell count, not a Canadian broadcaster).

Did not know, but could piece together UTE PEAK, 59d. [Colorado mountain named for a nearby tribe].

The theme kept me guessing for a while, but then it all came together logically. It’s fresh and fun, and I enjoyed the puzzle. 4.25 stars from me.

What a funky title! I wonder if that’s what inspired the idea here, or if the title came after… 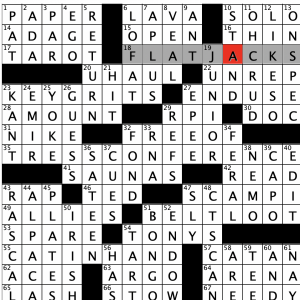 At some point during the solve I thought to myself It’s been a while since I’ve solved a good ol’ fashioned letter swap theme! Though it’s one of the most familiar types of themes, I very much enjoyed it. The fist themer I uncovered was CAT IN HAND, and I thought the base phrase was CASH IN HAND (or is it CASH ON HAND that I’m thinking of?), so I didn’t quite grasp the P-T relationship, despite my initial suspicion from reading the title, until I hit on TRESS CONFERENCE.

BELT LOOT is the only one that didn’t land all that solidly for me. I’m not sure if it’s the phrase itself or the fact that the phrase already contains another T that was not the result of a P alteration.

Filled just fine. Liked OH, CRUD! Not sure I’m understanding the clue for 1A [Old-fashioned screen?] PAPER. Any help on that one? 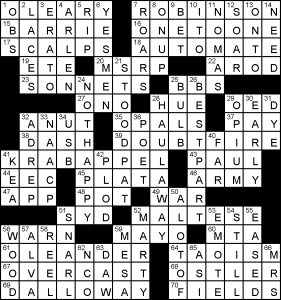 This theme felt kind of half-baked. You have MRS, and then just a list of famous MRS’s, which feels virtually endless in options. So what do you do? See how many you can cram in I guess?