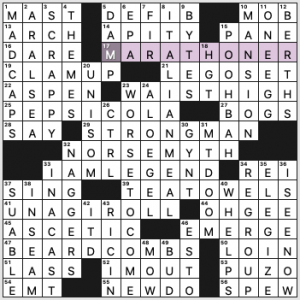 Was this puzzle harder than you expected, or did I just give myself trouble with all the wrong turns? I had WAIST DEEP rather than WAIST HIGH (pools go with DEEP, not HIGH!), MORDOR for MT DOOM (hang on, did Tolkien abbreviate that, or was it always Mount Doom? note that the clue has no suggestion that the answer’s abbreviated), LEGO KIT for LEGO SET, and LION TAMER for STRONGMAN. Too many derailments!

Highlights in this 66-worder: SCRAPPY, MARATHONER, PEPSI COLA (I like the baseball mislead: [Name on a vintage red, white and blue cap]), I AM LEGEND, and of course POOHBAH. Not so keen on “A PITY,” MADCAPS (plural, a noun form? So unfamiliar in that fashion), SUABLE, NAGGERS, WORSE TO COME, the green-paintish ITALIAN MEAL, and ONE EGG.

It’s Amy filling in for Jenni, and how lucky for me to be treated to a fun Inkubator themeless! Sophia and Kyra, who met at Carleton College eons after I went there, have teamed up before, and they sure get good results. Lots of fresh and young and woman-friendly content in this puzzle: THIRST TRAP (if you’ve ever swooned from looking at a photo, you’ve seen a thirst trap), LGBTQIA (dang it, I jumped on ROY G. BIV for [Rainbow initialism], even though ROY G. BIV doesn’t fit the definition of an initialism), TikTok star ADDISON RAE (who I just heard of for the first time this week—perfect timing!), SAFE RIDE on campus, THE SQUAD of Congress. There are also clues that resonated—can’t help wondering if the pleasure I take in a puzzle written and edited by women is something that men have been grooving on in crosswords by men all this time? 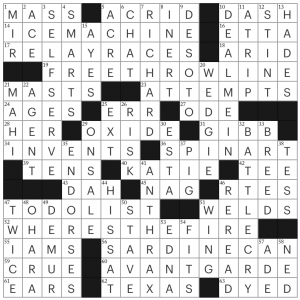 Well, folks, it’s Friday, it’s a Robyn Weintraub themeless New Yorker gem, and it’s my last day as the regular blogger for the New Yorker here at Team Fiend, so I have a lot of feelings! First, the lovely puzzle:

The long entries today are all super fun; I *loved* WHERE’S THE FIRE??? (question marks implied), and also enjoyed SARDINE CAN, BATTLE CRY, SELF-SERVE, FREE THROW LINE, RELAY RACES, AVANT GARDE, and ICE MACHINE. These are all pretty satisfying entries, and they were mixed in with some equally enjoyable medium fill, like WEDGIE, DEAL ME IN and SPIN ART. Just a bunch of fun little choices in the construction of this puzzle! We also have some classic Robyn Weintraub cluing, including the is-that-a-dirty-joke? clue on RICHARD [Dick but longer], the clever misdirect of [Revolutionary painting?] for SPIN ART, and the perfect colloquial context clue [Question that might follow “Hey, slow down, buddy!”] for WHERE’S THE FIRE???. Great stuff!

Overall, tons of stars from me. The long stuff is sparkly, the short stuff is also fun, and the clues are Friday-yet-clever.

And now some brief sentimental stuff: I started writing for Fiend a couple years ago when Amy was looking for someone to cover the New Yorker puzzles regularly. As the New Yorker puzzles were (and still are) my favorite mainstream puzzles in the business, I was thrilled to have a chance to think critically about what made them so good. I’ve learned so much writing for Fiend, as a crossword-critiquer, as a constructor, and as a member of the wider crossword community. Having the opportunity to think and write about my favorite puzzles 2 and then 3 times per week has been an a joy, and I’m grateful to Amy and the rest of Team Fiend for putting up with my possibly sometimes maybe overly-positive write-ups (?). I’m sticking around as an emeritus member of the team, and will probably pop in now and again to cover the New Yorker or another puzzle as needed. I’ve got some exciting crossword-related news coming soon, so if you’re worried you won’t be able to go on without my crossword commentary, rest assured it will be returning soon! (And in the meantime, you can always follow me on Twitter). Thanks again to Amy, Team Fiend, the outstanding New Yorker constructor slate, and the commenting community here— it’s been an honor. See you on the internet! 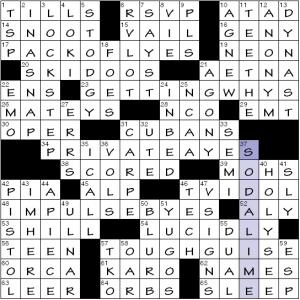 Today’s theme features phrases ending in /īz/ and replaces them with homophones, to wackiterious effect.

All sorts of spelling variations among the originals and substitutions, but there are a couple of duplications. Not a big deal, but it crimps the style a bit.

Thing I noticed about the crossword was the amount of clever-type clues. Maybe it was a little too much, because I found it perhaps just a tad distracting. On the other hand, I always appreciate a well-turned clue. Anyway, here’s a sampling: 11d [Raise canines?] TEETHE, 31d [Seize like Caesar] CARPE, 41d [Like some winks] SLY, 43d [Incoming words] I’M HERE, 50d [Jacket material] BLURB, 51d [Short-lived ’80s–’90s cars that sounded like they should always work] YUGOS, 59d [Medium strength?] ESP, 1a [Bill collectors?] TILLS, 46a [Soap dish?] TV IDOL, 63a [Look the wrong way?] LEER, 64a [Space balls?] ORBS. Maybe a bit overwhelming?

It still took me a few moments post-solve to grok the theme. The revealer clue at 67a is [Reaching an agreement … or, parsed differently, what the starts of 20-, 34- and 40-Across are?]. The answer is COMING TO TERMS. I tried to re-parse the last two words but got nowhere. Finally I realized that all is needed is a hyphen in just the right place: COMING-TO TERMS. The other theme entries start with terms that are synonyms for “coming to” (i.e. awakening). (Does adding a hyphen constitute re-parsing?) 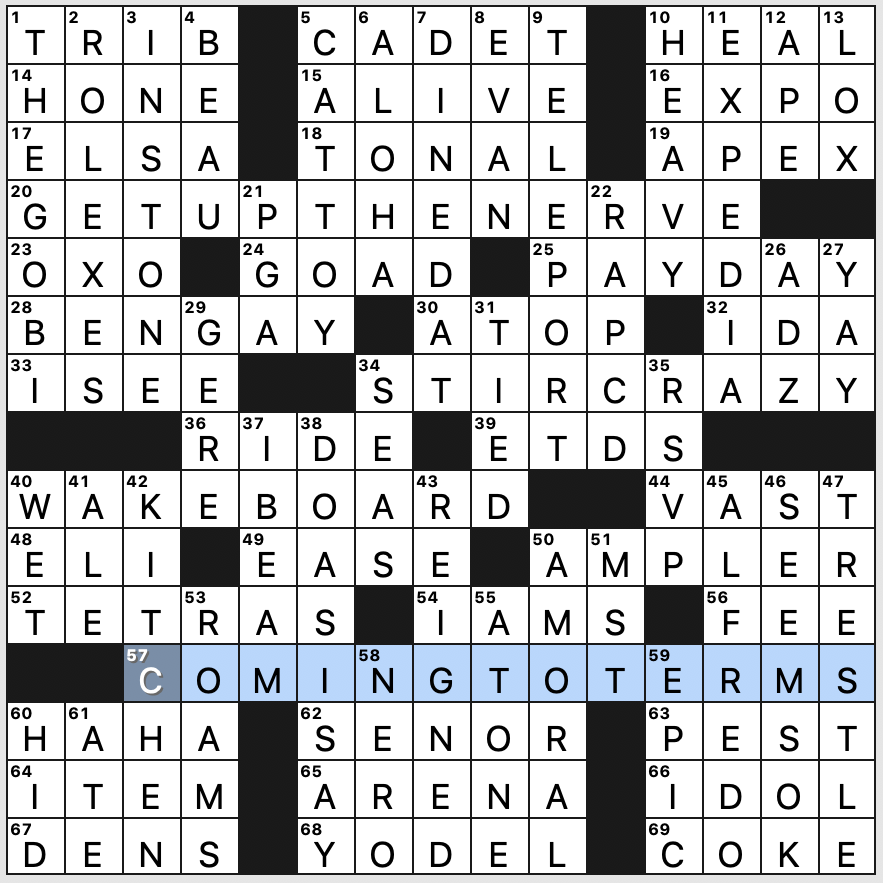 This was a pretty stealthy theme, at least for me, and I liked the aha moment, even if it came after the solve.

Fill-wise, there are a lot of interesting entries everywhere I look, starting with TELEPORT and “DO AS I SAY” in the marquee positions. Also good: EXPEDIA, KITCHEN, CAT TOY, SEEMS OK, and BEN-GAY. (Huh. Just learned that it’s now written as the hyphen-less BENGAY as of 1995. Maybe that’s where the hyphen came from for the revealer.) I particularly liked ALFREDO because that’s my go-to word when someone asks how to pronounce my last name of Peredo: “Rhymes with ALFREDO.” I never did get around to naming a son that.

Not so sure about AMPLER as an entry [More than more than enough?]. And RAP CD feels green-paintish. Oh, and [Woodworking tool: Var.] ADZ crossing proper name IDA might be a sticking point for some.