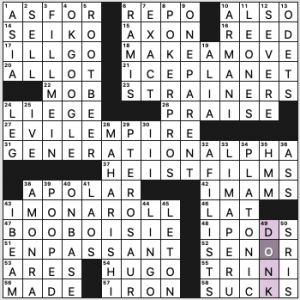 This unusual 64-word grid is incredibly orthogonal, nary a diagonal stretch of black squares to be found.

Fave fill: MAKE A MOVIE, new-to-me GENERATION ALPHA (31a. [Ones born beginning in the early 2010s], guess you switch to Greek letters after exhausting … just X, Y, and Z), HEIST FILMS (I want to watch the heist-amid-a-zombie-apocalypse Netflix movie, Army of the Dead), “I’M ON A ROLL” (small scowl at “I’LL GO,” though), the BOOBOISIE, FILL ME IN (also the title of a crossword podcast), “OK, GOOGLE” (which gives me nightmarish “OK, Caillou” vibes), yummy ROOT BEER, POKER PROS (hey, Ben Bass!), and AFI LISTS.

Just four things, since I’m tardy for some family time: 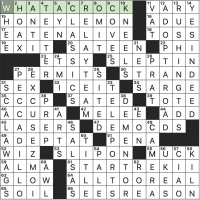 I found this puzzle a bit tougher that normal LAT Saturday challenge puzzles. As the Newsday puzzles try to get easier, I think these are getting a little thornier. And that’s OK! There will always be a market for puzzles that strive to push the solver to their limits. We all know of several indie outlets that do just that, but as far as mainstream puzzles, there are not many tough options other than the Saturday NYT, the “Stumper”, and this one. Am I missing any?

This is an excellent themeless. The stars of this puzzle are the corner stacks, which are chock full of lively and entertaining entries. That will fill up most of the highlights below! A solid 4.8 stars for this Tracy Gray and Jeff Chen collaboration. Bring on more of these!

As mentioned, a few notes:

Off to do more puzzles! 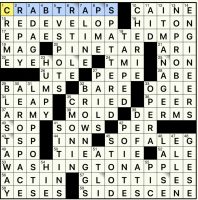 It has been a while since I solved the Newsday Saturday puzzle on my iPad, so I decided to go that route today. Also, my Mac is nearly dead!

Greg Johnson puzzles always give me fits. This one was no exception. There are a couple of tough doozies in here, but a couple of the entries did make me smile a bit, and this was a satisfying solve for me. On to the rest of the day! 4.6 stars. 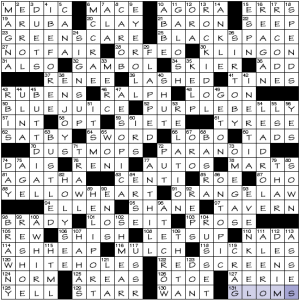 This one played a bit different for me. Couldn’t immediately get a toehold in the top left, so my entry was rather scattershot. Further, although I could tell—from the title and the first themers I completed via crossings—that colors in phrases were being moved around, it wasn’t until the grid was nearly finished that the mechanism involved specifically exchanging from symmetrically opposite entries.

Notice anything else? The paired colors are complementary! (One might quibble with black–white, but I think it’s cool). That’s quite a feat of construction, which explains the slight paucity of theme entries. 87a [“So the truth is revealed!”] OHO.

In homage to the theme, I’m providing my commentary here in the hexadecimal complement to my usual ‘signature’ color.

THEME: Common phrases that end with T are missing that T. Wackiness ensues. 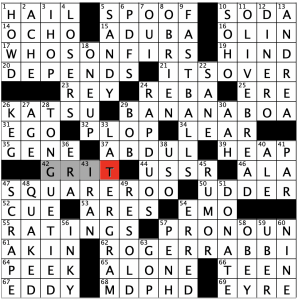 Another classic theme type, done very well. All of the themers are winners for me. And the title revealer, Spill the T, along with fill like LATERGRAM, which is new to me, but fun and inferable, kept it fresh.