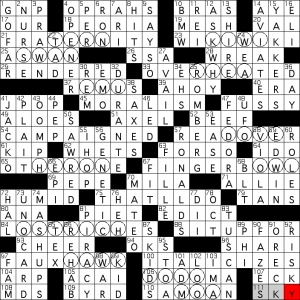 hello and welcome to episode #677 of matt gaffney’s weekly crossword contest, “Lofty Aspirations”. for this week 3 puzzle, the instructions tell us that This week’s 12-letter answer describes where some creatures can go and others cannot. okay. what are the theme answers? the most obvious one is the last across answer, {Where some creatures can go} SKY. not that you necessarily needed this hint, given the title, but it’s definitely a nudge (or perhaps a shove) in the direction of birds, and indeed, there are twelve across answers—not all the longest ones—that include a hidden bird:

so, we have twelve birds, some of them much more obvious than others. luckily, the instructions strongly suggest that we’re looking for twelve of something, so once you have a few you can find the others with a bit of concerted effort. some long answers like CAMPAIGNED and ITALICIZES don’t have any avian content, but that’s okay. anyway, what do we do now?

well, it seems clear based on the instructions and the clue for SKY to distinguish between birds that can fly and birds that can’t. any experienced crossworder knows a lot more about flightless birds than the average person does, so now it’s time to put that knowledge to good use. of the twelve birds in our puzzle, the ones with the power of flight are (T)ERN, SWAN, DOVE, HERON, OWL, and HAWK; the flightless birds are KIWI, RHEA, EMU, OSTRICH, DODO, and MOA. separating our twelve theme answers into two lists based on flight ability gives us:

for flighted birds, and

for flightless birds. reading off the first letters of the theme answers in these two lists gives FAR-OFF WORLDS, which is the meta answer. (it’s not literally true that some creatures can go to far-off worlds, but i suppose it’s literarily true.)

i admire the scope of this meta. in order to make the key mechanism—separation into two lists—work, you need to have a pretty big set of theme answers; otherwise, it’s not that hard to just anagram the first letters to get the meta answer without really grokking the mechanism. twelve themers feels like about the right number, but that’s a ton of theme content, necessitating a 19×19 grid in this case. the flighted/flightless distinction is really neat—i love the idea of basing a meta mechanism on crossworders’ collectively having seen zillions of {Flightless bird} clues for EMU, RHEA, etc. it’s the really original part of an otherwise familiar theme type (hidden birds, which feels like well-trodden territory).

overall, this felt considerably easier to me than week 2, but it’s a very tidy construction. there isn’t a huge amount of freedom in choosing theme answers that hide any specific bird, so the fact that matt was able to turn them into an acrostic that spelled out a (somewhat) relevant phrase is really neat.