UM…NO (1a) is an appropriate place to begin with this grid. I did not enjoy this one very much. The theme is totally fine, but the fill is another thing altogether. Let’s start with the revealer.

HIDDEN MIC (61a, [Source’s sound source, appearing six times in this puzzle]). MIC is to be found, rebus-style, in the other theme answers. It’s not often the WSJ runs a rebus, so it caught me unawares. 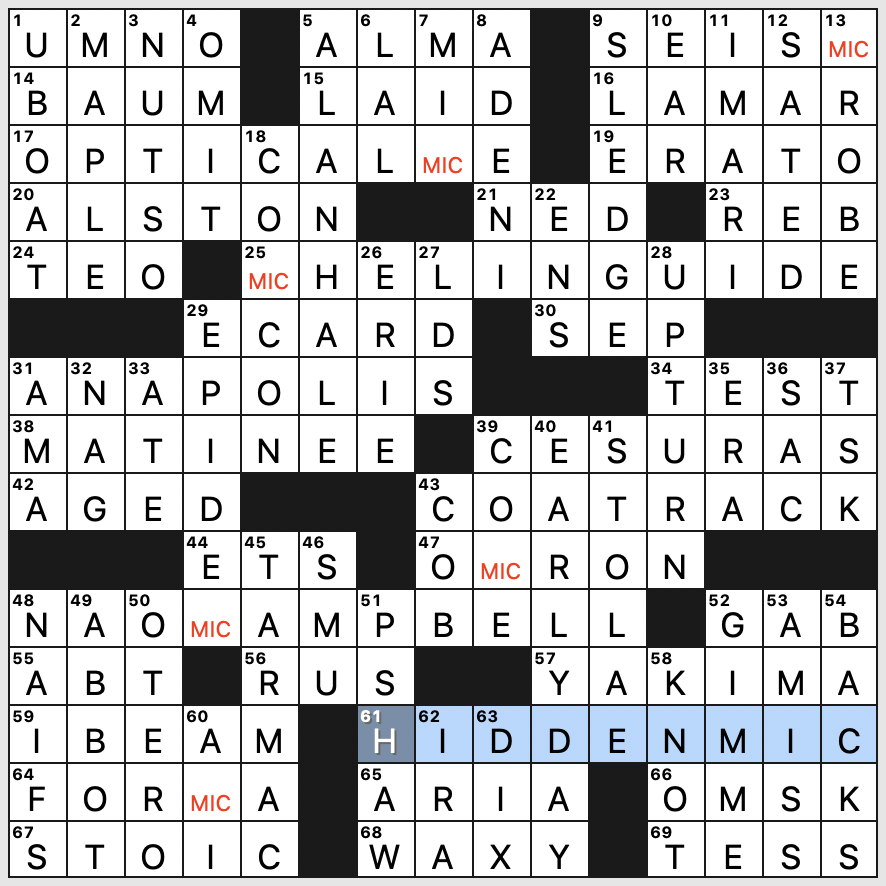 Before I realized what was going on, I was hugely thrown off by the fact that the first themer I worked out was FORMICA at 64a which I first wrote as FORMA because there happened to be an I and C in perfect position right below the M as part of STOIC. So my first thought was that the MIC was going to be hidden as part of other entries. Add to that the M in 57a YAKIMA which, based on my previous experience with FORMICA, seemed to want to be YAKIMICA. I was so thoroughly confused at this point I just had to go look elsewhere. Finally EPIDE(MIC) set me straight, and it was a relief to realize this was a rather normal rebus puzzle.

But oy, the grid. Where did I have trouble? Let me count the ways.

Was there anything I liked? Yes, I did like the theme. Judging by the kludge in the fill though, it should have been pared back to allow for a cleaner grid. But COAT RACK, MATINEE, and UPTURN are good, and I’ve even come around on EARLY DAY (as in “I’ve got an EARLY DAY tomorrow”). I also liked NUTSO (which this puzzle kinda was) and GIMME (which this puzzle was not).

This could have been a fun grid with an unexpected theme. Instead it turned into quite a slog because of the density of the theme material. 2.5 stars. 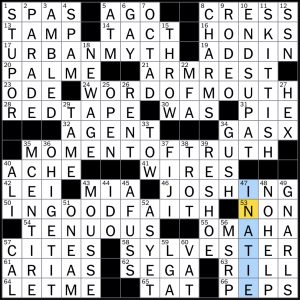 Barbara Lin has today’s NYT and it’s a tribute, of sorts:

The revealer on this one felt a little anticlimactic.  Reading the phrases with Sylvester’s trademark lisp makes them make sense with the clues (“urban miss”, “word of mouse”, “moment of truce”, “in good face”), but overall I was underwhelmed.

other fill of note: CRESS is our “peppery salad ingredient” (I was trying to fit ARUGALA somehow), RED TAPE, GAS-X, TENUOUS, PARADE, SKITTISH, and 17-time host of the CMAs Reba MCENTIRE

Quickly because – well, that seems to be how it’s going for me these days. I found this a little more difficult than recent FBs because of some tricky cluing. I knew what was going on with the theme immediately, although I didn’t expect the revealer. 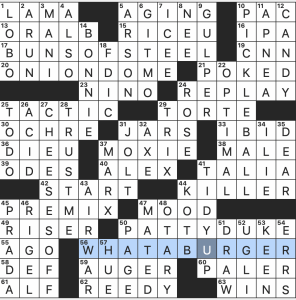 And 56a [Texas-based fast-food chain….or an apt remark about the beginning of the answers to the starred clues?] is WHATABURGER. Never been there. It’s vaguely familiar. I had no idea the chain is based in Texas, so that’s also “what I didn’t know before I did this puzzle” and that’s it for me this morning! 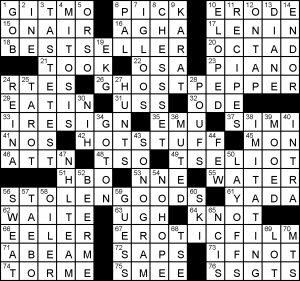 The number of abbreviations (including four iffy plural ones NOS, RTES, SSGTS, MTS) and other awkward suffixes, plurals and other crutches was over the top and really sucked the life out for me. BEERME is not worth EELER, ABEAM and generic NHLTEAM. I don’t know if a less open grid would have facilitated a more controlled fill?

“This little piggy went to market….” The revealer tells us what to look for at 40a [Auto wheel alignment and a phonetic hint to this puzzle’s theme]: TOE IN. Each theme answer has TOE added. 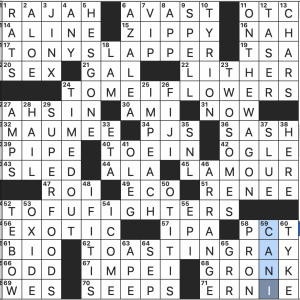 I enjoyed this! What I didn’t know before I did this puzzle: that I M PEI designed the Dallas City Hall.